Can This Man Save the BJP?

Nitin Gadkari is set to take over a party that desperately needs someone who can shape victories. A look at what his vote-pulling formula might be 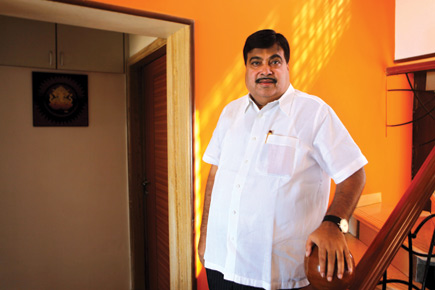 Nitin Gadkari is set to take over a party that desperately needs victories. A look at what his formula might be.


Nitin Gadkari is set to take over a party that desperately needs victories. A look at what his formula might be.

Saffron flag wavers and ‘Jai Shri Ram’ sloganeers in New Delhi may have rallied around LK Advani in reaction to the Liberhan Committee report, of late, but BJP watchers scanning the horizon have an eye on a figure far in the distance—about 1,400 km away, in Mumbai. In a sea-facing 12th floor apartment in Worli, the trusted lieutenants of Nitin Gadkari, the man tipped to be the next president of the Bharatiya Janata Party (BJP), are busy readying copies of his curriculum vitaé (CV). He is also set to launch his website. “Should I add the president bit to the CV?” asks an aide in a whisper. “No, no, not now. Let it happen,” instructs the leader.

Nitin Jairam Gadkari is 52 and hates being in the limelight. He does not like security guards trailing him like his shadow, much less being garlanded. There are many who might want to; the party needs a hero. At a time when the BJP is looking to rebuild its ramparts, it is perhaps a providential detail that ‘Gadkari’ in Marathi means ‘guardian of forts’. He tells Open, “I did not want to be in the main hero’s role. I have always wanted to be in a supporting role. I chose to be a low profile person because it allows me the freedom of movement without security guards. I do not want to have a restricted life.” His interests reflect this desire for anonymity. Extremely fond of music and films, he has installed Chinese software at home for karaoke. “It is fun,” he says, “I see the words and sing along. My favourite singers are Adnan Sami and Lucky Ali. The song Aa bhi jaa is my favourite.”

But he cannot retain anonymity for much longer. His phone has been ringing incessantly, with some of the country’s richest and most powerful people at the other end. Clearly, Gadkari has come a long way from the youth who rode around Nagpur on a Lambretta scooter handing out press notes to the city’s newspaper offices and meeting journalists. This Deshastha Brahmin lived close to the RSS headquarters in Nagpur’s old Mahal area, and apart from the RSS, was a member of the Akhil Bharatiya Vidyarthi Parishad (ABVP) in his
student days. From quietly laying out carpets at party programmes of the Jan Sangh (the BJP’s earlier avatar) to getting public works projects executed, Gadkari has shown dedication to the tasks assigned to him. It is for this, observers think, that RSS chief Mohan Bhagwat has endorsed his candidature for the BJP’s presidentship. He can do what it takes, goes the feeling. Why, for wider acceptance within the party, Gadkari has even tried to shake off his upper caste tag.

It hasn’t always been smooth for Gadkari. In Maharashtra politics, there has been a rift in the BJP unit that can be traced to his turf war with the late Pramod Mahajan and his brother-in-law Gopinath Munde. In the days that Mahajan handled the party’s affairs in the state, Gadkari found himself out in the cold. It was LK Advani’s backing that saw him make a comeback, though Munde and he still don’t really see eye to eye.

Gadkari is utterly unlike Mahajan, except for a passion for food, which shows on his belly. In 1999, when the Congress-NCP government transferred the official cook attached to Gadkari’s bungalow, he reacted with considerable anger—“Kya khana banata thha woh. Mein inn logon ko nahin chhodunga. Inhon ne mere pate par laat mara hai (He was a great cook. I will not forgive these people. They’ve kicked me in the stomach).”

What his supporters want to do, however, is position Gadkari as a development man. They point to his performance as public works minister in the late 1990s under the Shiv Sena-BJP regime in Maharashtra. To his credit goes the Mumbai-Pune Expressway, a talking point till this day. Referred to as ‘pulkari’ (maker of bridges), he is said to have sanctioned 55 flyovers for Mumbai alone and an equal number elsewhere in the
state. Work on 47 Mumbai flyovers started during his tenure as PWD minister, and his build-operate-transfer (BoT) model for the involvement of private companies has proven quite effective for such infrastructure projects. Obsessed with deadlines, he started fining contractors who delayed projects and rewarding those who completed them before time. It still makes many a living room conversation in Mumbai.

Little wonder, then, that Gadkari has been picked to get the BJP lotus beeping victoriously in ballot booths again. He is young, endorsed by the RSS, free of controversy and someone known to get things done. As a regional leader, he may be unknown to BJP units outside Maharashtra, but he considers this his greatest strength. He feels that fame could be a burden which would come in the way of all that he is keen to achieve.

But there are other traits, some say, that could hold him back. His role in exposing a series of scams under the Congress-NCP regime has been noted—there was the petrol adulteration racket, Telgi scandal and the Naptha scam—but thanks to his personal equations with ruling-party leaders, these campaigns petered out. A top leader of the BJP would need to attack with full force, not berate a chief minister for awarding questionable contracts and then leaving it at that (as happened with Vilasrao Deshmukh). The party needs a hero, and a hero must be a winner.