Boy Who Burst out of His Bubble

He spoke of his Dream India where everyone could dream freely. Tsk, tsk, we said. Then came the electoral tests. He lost some, won some. But now he finally has our attention. 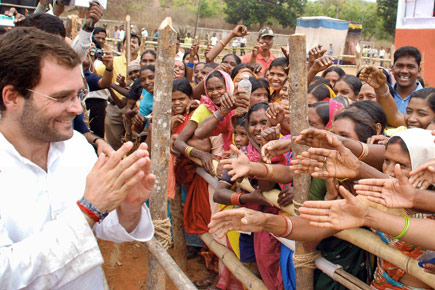 He spoke of an India where everyone could dream. Tsk, tsk, we said. Came the electoral tests. He lost some, won some. Finally he has our attention.


It was a sight that moved the whole nation: a young boy consoled by his father at his grandmother’s funeral pyre. For years afterwards, the boy would be brought up quietly by his parents, away from the media gaze, until his pictures surfaced again, watching a tennis match. Rahul Gandhi was still the boy in the bubble, a sort of globular film surrounding him through which India looked in, wondering whether the young Gandhi ever looked out—and if so, what he saw. After Rajiv Gandhi’s death, it was his sister Priyanka who was assumed to have inherited the family thing for politics. And snapshots of his political initiation, walking in sneakers with a labourer’s load on his head, seemed somewhat contrived. He was still in a bubble. But the 2009 election results changed it all. In Uttar Pradesh, it was clear: he was the decisive factor in the Congress’ revival. Now when he speaks of bridging the ‘two Indias’, we listen. The Congress, he declared on 7 October, will win power in Uttar Pradesh. Will it? An Open-Cfore survey. Plus field reports.

WHAT WE ASKED THEM

»Should Rahul have become PM instead of Manmohan Singh?

»Should Rahul contest the next assembly polls in UP as the Congress candidate for Chief Minister?

»Is he genuinely concerned for Dalits or is it vote-bank politics?

»Is he genuinely concerned for Muslims or is it vote-bank politics?

»Does he genuinely care for the poor or is he posturing to win votes?

»Rahul has spent a night in a Dalit home and shared a meal with them. What do you make of this?

»What is Rahul’s USP?

»Do you find Rahul more accessible than other politicians?

»Which party did you vote in the last assembly elections?

»Which party did you vote in the last Lok Sabha elections?

»If there’s an assembly election today, who will you vote?

Research organisation Cfore conducted the survey in Uttar Pradesh between 10 September and 21 September 2009. A structured questionnaire was administered to a statistically chosen sample of 1,513 voters in the state. The areas covered were Muzaffarnagar, Rae Bareilly, Lucknow, Jhansi, Hardoi, Kanpur and Gorakhpur. Sixty-three per cent of this socio-economically diverse sample was from rural areas adjoining these cities. Twenty-four per cent of the respondents were Dalits and 16 per cent were Muslims (in proportion to their population fractions); 45 per cent were female.