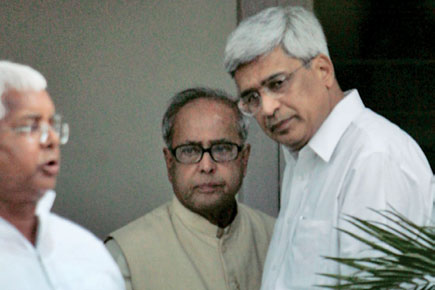 
NEW DELHI ~ Buddha has a lot to smile about. Even without breaking his silence, West Bengal’s former Chief Minister has got his party leadership toeing the line that he had laid out for India’s upcoming presidential election. The manner in which CPM General Secretary Prakash Karat gave in to Buddhadeb Bhattacharjee’s pressure in the Politburo meeting held on 21 June on the question of supporting Pranab Mukherjee’s candidacy has not only divided the CPM internally, it has also led to perceptions of Karat having deferred to Bhattacharjee.

What is worse from Karat’s point of view is that Bhattacharjee has achieved this feat without having to compromise his earlier positions that were at odds with the central leadership’s. In fact, the Politburo meet that saw Karat throwing his lot in favour of the West Bengal lobby—to the consternation of leaders from Kerala—was not even attended by the party’s sulking heavyweight. This development last week has left many CPM leaders aghast, some even lamenting Karat’s apparent meekness vis-à-vis Buddha, especially since the decision means that the larger Left Front will not be voting as a united bloc: while the CPM and Forward Bloc support Mukherjee, the CPI and RSP have decided to abstain from the presidential election.

The clarifications that Karat has issued in a signed article to appear in the forthcoming issue of People’s Democracy—a party organ—due out on 28 June, appear too weak. This is particularly so when pitted against the charges levelled against him by his own protégé, Prasenjit Sen, convenor of the party’s research unit, who resigned his primary membership of the CPM in protest against the Politburo’s decision to vote for Mukherjee.

According to Karat, besides the party’s determination not to allow the President’s Office to be occupied by anyone ‘who would be amenable to the influence of Hindutva forces’, the CPM’s decision factored in the rift within the UPA caused by the Trinamool Congress’ rejection of the prospect of Mukherjee as President: ‘Abstention in this case would mean lining up with Mamata Banerjee and the TMC in West Bengal. This would be politically damaging and unacceptable.’

Prasenjit Sen, in his resignation letter, had pointed out the fallacy of this argument. ‘Such arguments [that the Left would gain by driving a wedge between the Congress and the TMC in West Bengal], besides taking the political consciousness of the ordinary people of Bengal entirely for granted, are also reflective of naivete and lack of common sense. Repeated instances… have shown that the TMC has been able to defeat the Left Front in most places even without Congress support,’ Sen argued.

Karat’s protégé did not stop at that. He even accused the CPM general secretary of making a misleading argument while addressing the press after the Politburo meeting of 21 June. ‘It was said that the CPM has always supported Congress nominees as Presidential candidates since 1991, despite being opposed to its economic policies (2002 was an exception since Mr Kalam was an NDA-backed candidate ). What was not mentioned was that never before was a sitting Finance Minister of a Congress government (or any Union Minister for that matter) been nominated as a Presidential candidate since 1991.’

At the end, it may so happen that Karat’s clarifications stave off any serious debate on the issue within the party. Yet, they would find it hard to dispel the impression that he is failing to take the entire party along and that he keeps buckling alternatively before the Kerala and West Bengal units of the party. The current turmoil may be shortlived, but what it leaves behind may be more serious than the surface tension that it denotes. Insiders say that the Kerala unit of the party was dead against supporting Mukherjee. The Politburo was so riven by his candidacy that it could not arrive at a unanimous decision on the issue even after extended deliberations. Politburo members in favour of abstaining in the presidential election were so numerous that the decision was swung in Mukherjee’s favour only by Karat’s own casting vote. The West Bengal unit rejoiced at this, but the Kerala unit turned sullen. The gap between the two factions has rarely been wider.

Many in the party feel that through his casting vote, Karat has made a desperate attempt to build bridges with the West Bengal lobby, which has been going its own way in recent times and in complete disregard of the party’s central leadership. Whether this actually achieves the desired objective of the CPM general secretary, however, remains debatable. Insiders fear a worsening of the two units’ mutual antagonism. With the party having lost power in both Kerala and West Bengal, there has been finger-pointing galore—and it doesn’t seem likely to stop.