Political patronage comes in handy for Muslim orphanages in the state that ferry children from poor states such as Bihar and Jharkhand. Will they continue to beat the rap? 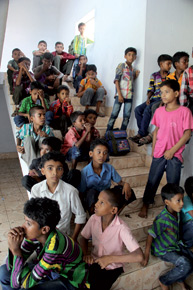 Political patronage comes in handy for Muslim orphanages in the state that ferry children from poor states such as Bihar and Jharkhand. Will they continue to beat the rap?

The Kerala conundrum has become a cliché by now. Yet, it refuses to die, with newer contradictions continuing to pop up every now and then to remind us just how well and how badlyKerala is doing. The latest scandal is the ‘orphan trade’ that has recently surfaced to rock the state.

Kerala has a peculiar labour scenario. Thanks to petro-prosperity and the peculiar status-consciousness created by huge financial remittances—estimated at Rs 60,000 crore last year—sent by its 2.5 million- strong community of Malayalees employed in the Gulf, there are almost no takers in the state for blue-collar jobs. This is in spite of the state’s high rate of unemployment. Unsurprisingly, the state’s high minimum wages have lured unskilled migrant labour by the drove even from distant states such as Assam. The state that thrives on Gulf money has, in effect, turned into a Gulf of sorts for migrants from other Indian states, with their count touching 2.5 million now— the same number of people from Kerala who are in the Gulf.

So while the state has the rare distinction of being the highest exporter as well as importer of labour, an even more interesting demographic phenomenon is that its number of immigrants more or less equals its emigrants. In sectors that range from construction to domestic help, Kerala depends on labour from other states for most of its low-paid jobs.

Until recently, however, few knew that Kerala has even been sourcing orphans from other states!

The state, it seems, does not have enough orphans for its 2,000 odd private orphanages to admit. Hence, these orphanages, most of them run by Muslim and Christian religious groups, have been getting hundreds of poor Muslim children from states such as Bihar, Jharkhand and West Bengal with the help of a network of agents.

It is no secret that more than any humanitarian concern, what drives orphanages to desperately seek inmates are the liberal government grants and huge donations from abroad. According to statistics available with the Union Home Ministry, 1,500-odd organisations based in Kerala—most of them religious entities or NGOs—received more than Rs 10,000 crore over the past decade as donations, of which 60 per cent went to those running orphanages and destitute homes. In 2012-13 alone, 1,502 organisations received a total Rs 850 crore. Except the Mata Amritanandamayi Mutt, all the top recipients were Christian and Muslim organisations, with the Believers Church leading the pack with Rs 417 crore collected in the past three years.

The scandal of Kerala’s orphan trade surfaced dramatically on 24 May when the Railway Protection Force at Palakkad Railway station intercepted two long-distance trains coming from Assam and Bihar. Out came from two coaches of either train about 600 Muslim boys and girls aged between five and 13 years, all of them originally from Bihar, West Bengal and Jharkhand. These children, packed like sardines in the compartments, were utterly exhausted from their long journey, and more than 150 of them had neither tickets nor any documents. Under interrogation, the eight adults who had travelled with them disclosed that the children were being brought to be admitted to two orphanages in Kozhikode and Malappuram districts run by Sunni clerical organisations closely associated with the Indian Union Muslim League (IUML), a party that happens to be the second largest constituent of Kerala’s ruling United Democratic Front. One of the two orphanages under the scanner is headed by Syed Hyderali Shihab Thangal, the League’s state president.

On their arrival at Palakkad, the orphanage authorities paid the fines levied by the Railways on those who had travelled without tickets, admitted that the children were being taken to their institutions, and proclaimed themselves to be do-gooders, wondering aloud what was wrong with their “humanitarian” mission of helping orphans from other states, as they had been doing for decades. However, the District Child Welfare Committee under the state Social Welfare department, led ironically by a Muslim League minister, took custody of the kids and recommended action against the orphanages and their agents under the Juvenile Justice Act. On their part, the state police registered cases of child trafficking.

Asked Ramesh Chennithala, Kerala’s home minister and former KPCC President, “Why [do] these orphanages import children from other states instead of setting up centres there if they’re [so] concerned about these children?” Even the IUML’s MK Muneer, the state’s social welfare minister, demanded action against the alleged child traffickers.

The children, it was confirmed, had been brought in violation of laws on orphan admission. This kicked up a storm. Under the Juvenile Justice Act of 2006, sanction letters from the concerned state governments, local self-governments and families are mandatory, as also birth certificates (among other things), for the admission of children from other states to orphanages. Most children did not have these documents. Some had fakes.

The state government appeared to initiate strict action against the offenders. But soon, League leaders and scores of Muslim outfits jumped in to defend the orphanages. They attacked police officers for registering cases and chastised Chennithala for portraying the so- claimed ‘minor procedural lapse’ on the orphanages’ part as a case of child trafficking. They also hit out at him for ‘communalising’ the issue, as they put it.

Chief Minister Oommen Chandy parroted the League line and Chennithala fell silent. Kerala’s Minorities Commission, led by a Congress leader, defended the orphanages as well. Muneer, too, changed tack and swallowed his words, saying there was no case of child trafficking but only a minor procedural lapse.

The state BJP, in the meantime, took the case to the Centre. Union Minister Maneka Gandhi described it as one of child trafficking. Malayalam TV channels sent reporters to the children’s villages in Bihar and Jharkhand, and reported that they had been “purchased” from their families by agents for Rs 1,000 each to be sold at double the price to orphanages. Officials of the Jharkhand government arrived in Thiruvananthapuram and confirmed that it was a case of child trafficking and asked for the children’s immediate return. The state Human Rights Commission came down heavily on the orphanages and instituted an investigation. With the Kerala High Court too reprimanding the state government for its casual attitude towards the incident, League and Congress leaders have now chosen silence. Chandy has offered to bear all expenses for the children’s return journey. But as the dust over the scandal settles, the case of child trafficking looks like being given a silent burial and the orphanages getting back to business as usual.

(MG Radhakrishnan is a senior journalist based in Thiruvananthapuram)