Anupam Kher: “The Day I Want to Join Politics, I Will Do It Shouting at the Top of My Voice” 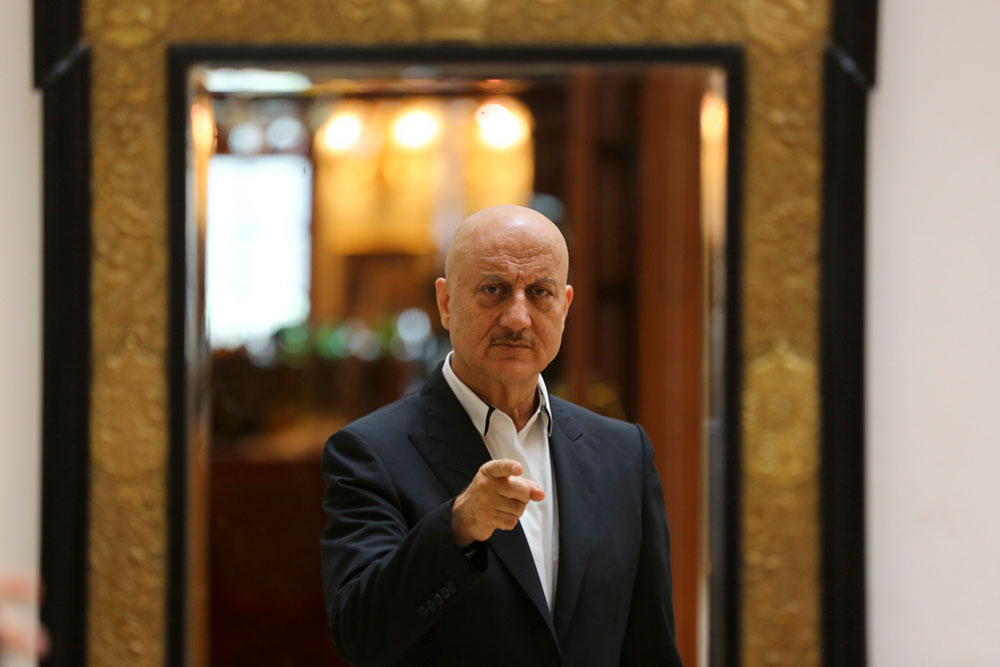 In person, Anupam Kher looks younger and less dour. It is said that a camera adds five kilos. In Kher’s case that is also true. You find a leaner version before you. His office in his acting school in Juhu, where the interview happens, is crammed with books, papers and memorabilia. On his table, there is a thick bunch of documents he had prepared for his Pakistani visa, which got denied. Presumably, it is now an exhibit. On the walls, there are numerous items clipped onto boards—from his first college identity card to photos of him on a beach with the crew of Silver Linings Playbook (all of them in swimming trunks) to news clippings. It is a busy little office sitting in which Kher spoke, sometimes in rich detail and sometimes with measured vehemence, about his life and politics.

Your avatar as a political person, does it start with the Anna Hazare movement?
Yes. I was shooting in Pune and I got a message from Manish Sisodia saying, ‘Humein aapki zaroorat hai, aap aajaiye’.

Till that time you were not so vocal on politics?
Because nothing was happening. This was the first platform where people were talking about corruption. I felt what was happening was amazing. I was getting involved in it. Then they decided to make a party. I remember I was called in the middle of the night and they said, “Aap kal aajiye please. Aap humara memorandum padhiye”. When Arvind Kejriwal and Manish Sisodia were on hunger strike (which culminated in the party formation announcement), there is a very famous picture of me talking to them with a tilak. I am telling him (Kejriwal), “Anna does not want you to do this, you are diabetic, how can you fast? Please don’t do this. Jab aap Bharat ke pradhan mantri ban jaaoge, aapke bare mein kaha jaayega ki Bharat ke pradhan mantri ke pramukh salaahkar Anupam Kher ka yeh kehna hai.” I was joking with him.

Then they made me read this whole thing. As I was reading it, I suddenly felt ‘Ke yaar, yeh galat hai. Mujhe isme nahin padna chahiye’. I did my job and came back. All through in his campaign, Kejriwal was talking about (former Delhi chief minister) Sheila Dikshit, that he had 400 pages of evidence against her. He became the chief minister and in his first interview when the journalist asked him (about action against Dikshit), he said, “Aap saboot la ke de dijiye, mein unpe karyavahi kar doonga.” That is where I went completely out of my mind. How could he say something like that? That was my first complete disillusionment.

Then Modi’s campaign started. I started hearing his speeches and I felt very connected with them.

Did you know Modi before that?
No, I had gone and shown him… my director wanted to show him A Wednesday and because I had met [Modi] there and I was opening a school in Chandigarh and another one in Ahmedabad, I called him for the inauguration. I was very surprised at the way he was functioning. He gave me a time at 12.15 and at 12.15 he came and said, “Boliye”. I said, “Main chaahta hoon ke aap mere school ka inauguration karein.” He said, “Bahut achchi baat hai”. When I met him, my impression was that this was a man who does things.

When your wife got the BJP nomination, you yourself had no inclination of getting into politics then?
Not at all. I was doing well, happy [with] running the school. Before this, lots of parties had asked me to fight elections, whether it is Congress, whether it’s BJP. Every time there are elections some candidate comes and asks, “Aapko ticket lena hai”, and I have said no to them. When the election came, because Kirron was there, a lot of people asked me will you campaign (for others)? I said no. I will not be campaigning for anybody. Kirron is my wife; it is my duty to campaign for her. That is the only person I will campaign for.

When the FTII agitation happened, what led you to speak against the appointment of Gajendra Chauhan?
Arnab [Goswami] ke debates mein jata tha, aur kuch channels… because I thought it was important to give your opinion. You have to get out of your comfort zone. You have to get out of your cocoon and talk about what bothers you. I was very vocal about any subject. I thought it (Chauhan’s appointment) was ridiculous.

Then this whole award wapsi started happening. The more I started saying (against it) the more I started feeling that there are people who are designated to attack you. And when that happens… I am a self-made man. I came to [Mumbai] with 37 rupees. My father was a clerk in the forest department. I am a victim of Kashmiri terrorism. I will not let you bog me down. You can’t take anything away from me. In today’s times, maximum what will happen? People will not give me films. That is the worst situation. Aapko kaam nahin milega, koi baat nahin. Mera school chal raha hai. Main sadak mein khada hoke damru bajaaoonga. Hazaar log khade ho jayenge, sab ko kahunga paanch rupaye do. Aur mein apna kharcha chala lunga. Then this JNU thing happened… Bharat Ki Barbaadi, Tukde Tukde.

Isn’t it normal to have such voices? The difference is in you getting involved in the issue.
I don’t think I have heard Bharat Ki Barbaadi, Tere Tukde Honge in a university, by students ever in my life. The day I start thinking this is normal, there is something wrong with me. I can keep quiet like millions of other people, but I don’t think that is the right thing to do.

The BJP has many stars, but for some reason it is your voice that is usually heard in support of the government.
It is not BJP’s voice. It suits people to say that it is the BJP’s voice.

Why does it get so much traction?
Because I speak the truth. I don’t have an agenda. And people are very smart to understand agendas. I had prepared a completely different speech (for The Telegraph debate). I had points in my mind in Kolkata until that judge [Justice Ashok] Ganguly (questioned the Afzal Guru death sentence). When I heard him speaking, such a senior retired judge, maine jo points banaaye the, woh mere dimaag se nikal gaye. It went viral because I think it was the truth and it is what every Indian feels.

Were you helped by the BJP?
No. That is why there was no police. I had a back problem. I was jostled all over the place. Before that when Mrs [Sonia] Gandhi went to meet Mr Pranab Mukherjee, there was a clean clear way, thousands of policemen. Humaare yahaan toh koi bhi nahin. 50 policemen were there. It is a matter of interpretation [that he was assisted by the BJP]. I always give this example. You can wake up a person who is sleeping; you cannot wake up a person who is pretending to sleep. The faster and sooner you understand these games, the more peaceful you become.

Why did you decide not to go to Pakistan after they agreed to give you a visa?
Why will I go? Bheekh maang ke thodi jana hai. Aur jaa bhi iss liye, ki wahaan jaake main Hindustan ki baat karta. By that time I had given my dates to somebody else. Also, I was put off by this whole thing.

Last week there was a newspaper article that said you were close to the BJP from the 90s onwards.
They can write anything. They have a piece of paper.

You were not?
I don’t have to hide it. BJP is not a bad thing. The day I want to join politics, I will do it shouting at the top of my voice that I am joining. Because I will want to be in politics. Why will I do it in a hidden manner? I don’t have to be defensive. Agar jis din mujhe join karna hua politics, I will do it with a great press conference so that I can straight away win an election. It is a great platform. Why will I be subtle about it? I don’t want to be defensive about it.

What has been the worst response you have got?
All these news editorials.

Have you got used to it?
You never get used to it. The easiest thing is to leave social media, but why should I do that? It is a great platform for me to promote my book, promote my movies, to interact with my fans and followers. I do ‘question and answers’ with them. I do my journeys with them. And I am not a quitter. I will not quit.

Will you consider getting into politics at some point of time?
Maybe. Not now. My play is called Kuch Bhi Ho Sakta Hai. How can I tell you what I will do tomorrow? But right now, at least for four-five years, I have no such intentions.