An Untimely Botch Up in Jisha case? 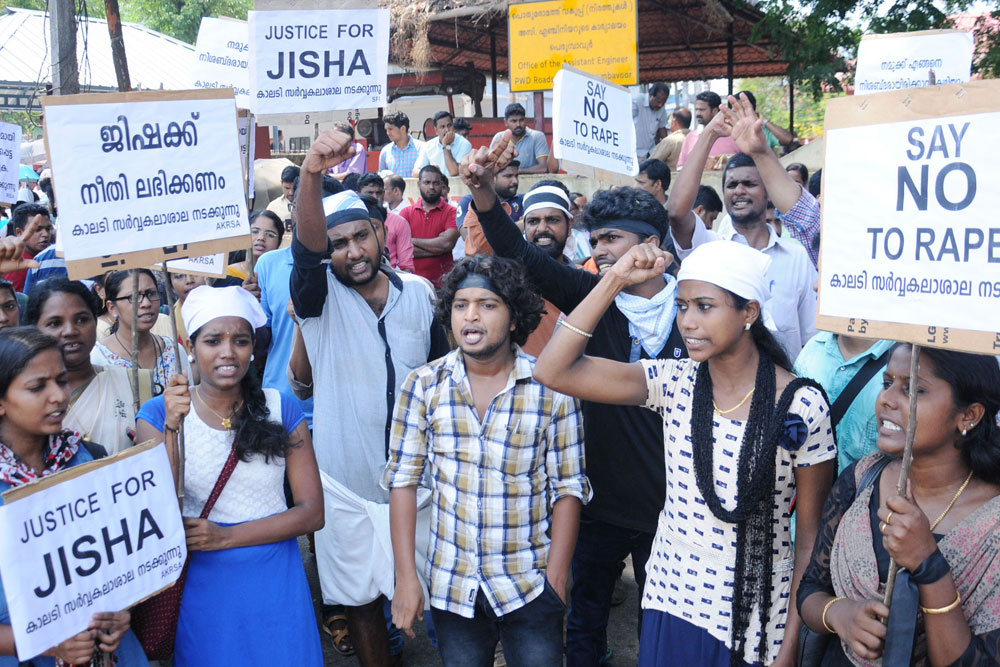 The first issue that came up for the consideration of the first Cabinet meeting of the new government in Kerala was the murder of Jisha, the Dalit girl who was brutally murdered and mutilated. It was understandable that this should be on the top of their priority list considering the political fallout of the case. The murder had shocked the state—Jisha was smothered and strangulated with genitals split open and 38 wounds on her body besides evidence of sexual assault.

One of the reasons the UDF lost power is attributed to how they couldn’t answer for the police making a mess of the investigation in the initial stages. The case took its toll on the CPM too at the election. Despite the wave which brought them back to power, the sitting CPM MLA of Perumbavoor constituency, where she was murdered, lost because Jisha’s mother accused him of being responsible for her plight..

The first decision of the state Cabinet was the reconstitution of the investigation team. Those in charge earlier—DGP T P Senkumar and South Zone ADGP K Padmakumar—were removed and those under them transferred with the promise of disciplinary action.

Just how badly the earlier team mishandled the case can be known through Jisha’s post mortem report with the biggest inconsistency being in the time of death. According to the police, Jisha was killed between 5 pm and 5.45 p m on 28 April. The autopsy report does not corroborate this and suggests death could in fact have been between 11 pm and 4 30 am, either the previous night or early morning of 28 April. The autopsy found rigor mortis had passed off from all over the body, except for the ankles. Dr Sherly Vasu, a retired police surgeon and a professor of forensic medicine, says rigor mortis sets within five to six hours of death and lasts for 24 hours. “Passing of rigor mortis begins by 24 hours and is complete in 34 to 48 hours. In this case, we have to assume that minimum 34 hours have passed by the time the body was brought to the post mortem table,” she says. This would put her death 12 to 14 hours before the police’s estimate.

She thinks such a variation between the police’s time and that suggested by the post mortem is just not possible, even accounting for hot and humid weather expediting the process of decomposition because the body, which lay in a closed room in the house, had no direct contact with sunlight. “Other findings like marbling seen on the body and blood stained frothy fluid seen oozing out of nostrils also substantiate this assumption of time of death,” she says.

So how did the police arrive at their time of death? They relied on the statement of a neighbor who said he saw Jisha alive at around 4 pm on April 28 and so death happening before that was ruled out. But the statement itself was taken many days after the murder and that makes it unreliable, according to George Joseph, retired Superintendent of Police.

“I am disappointed with the way the police arrived at hasty conclusions. We should rely on scientific evidence rather than witness statements taken after four to five days. The chances of error in such statements are quite high,” he says.

“He might have seen her alive on the previous day. How can the police rule out such a possibility?” asks Dr Vasu. John Ralph, a senior criminal lawyer, says time of death is very crucial in murder cases. “I know many cases in which the prosecution failed to explain such inconsistencies, especially when they have only circumstantial evidence. The police present corroborative witness statements based on wrong assumption of time of death. The doctor, who does the post mortem, stands by the actual time of death in cross examination and the entire case collapses,” says Ralph, hoping that this is not repeated in the Jisha case.

The post mortem report also found the stomach full with particles of rice, garlic and other unidentified food. Both Dr Vasu and Varghese think this too suggests she was killed by midnight. Dr Liza John, associate professor at Alappuzha Medical College who had conducted the post mortem, was not available for comment.

It has been a fortnight since the new investigation team took over and they haven’t come up with any significant breakthrough, apart from a sketch of a suspect. They are said to be looking at whether the killer is a migrant worker. But in the absence of any concrete findings, it is uncertain what direction, if any, the new investigation is taking.