A Tale of Two Mosques 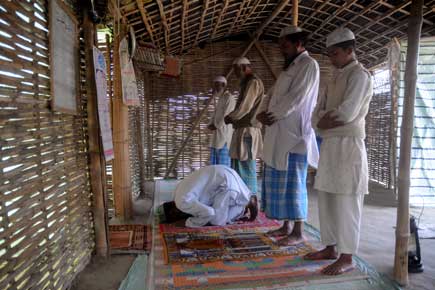 This village may go by the name of Allahpur, but the real signifier of change here is the dirt road that cleaves its residents apart by caste


This village may go by the name of Allahpur, but the real signifier of change here is the dirt road that cleaves its residents apart by caste. For a close look at how the myth of the ‘Muslim vote bank’ is being shattered on the anvil of caste, there’s no better place than this part of Bihar’s East Champaran district. Mostly Muslim, the inhabitants of Allahpur have split themselves into two groups separated broadly by their claims of lineage—the Sayyads and Khans (Ashrafs, equivalent of upper-caste) and the Ansaris, Dhunias and Raain (Pasmandas or lower-caste).

The divide is sharp. Which is why, more than a year after the police had to step in to save Pasmandas from their upper-caste co-religionists, the road remains deserted after dusk. During the day, it does have people on it, but they travel in different directions. The Pasmandas, who are mostly landless, go to other villages in search of jobs, while upper-caste landlords get their fields tended to by labourers from other villages. Even for namaaz, the two are divided. While upper-caste Muslims bow to Allah in a pucca mosque’s courtyard, Pasmandas offer their prayers in kuccha structure.

“The day they (upper-caste Muslims) tried to demolish our mosque, we decided to break all our ties with them,” says Mohammad Samsuddin, the imam of the modest mosque that his fellow Pasmandas built in response to what they saw as discriminatory treatment meted out to them at the main mosque, which is located in the midst of upper-caste houses.

The demolition bid happened on 11 July 2006, just four days after the Pasmandas set up a separate place of worship, as Samsuddin tells the story. “It took us a week to erect our own mosque which we needed in order to offer namaaz with dignity,” says the imam who led the movement. “We were never welcome inside the old village mosque,” he adds, “The Sayyads and Khans used to force us to offer namaaz at the rear of the mosque even if we entered before them. Nowhere in the world do such things happen. It is completely un-Islamic.”

The first namaaz at the new mosque was offered on 7 July. “The upper-caste resented it,” says Shakur Ansari, another villager, “Four days later, nearly two dozen of them forcibly entered our mosque and left everything in shambles.”

On closer scrutiny, however, the events that are now being portrayed as a tussle over religious observance began as a battle for power. The schism can be traced to a Panchayat election in May 2006. “The crack in our community took shape in stages,” according to Samsuddin, “It started when we decided to vote against their (upper-caste Muslim) candidate for mukhia.”

In the Panchayat election, the Sayyads and Khans of Allahpur had fielded one of their own, Munir Khan, a member of Lalu Prasad’s Rashtriya Janata Dal (RJD), and then had the gall to ask every villager to vote for him—with utter disregard for the opinion of Pasmandas for whom the candidate was no more than a local bully. “In a meeting two days ahead of the polling, we decided to oppose Munir and vote instead for Sheikh Abdul Bari of Rampur (a neighbouring village of the same Panchayat),” says Mohammad Mustafa Ansari. “Though he is upper-caste, Sheikh sahib has always stood by us. He is part of Chief Minister Nitish Kumar’s JD-U (Janata Dal-United).”

The election was tense. “As always, the polling booth was in a madrassa surrounded by upper-caste households,” recounts Mustafa Ansari. “Around 10 in the morning, I along with nearly 20 members from our community reached the booth. Upper-caste goons, who had surrounded the booth, asked us to go back. When we resisted, some of them fired in the air. We got terrified and ran away. After that, we decided to confront them. So we reached the booth again and the ensuing skirmish ensured that polling at the booth was suspended. Since upper-caste Muslims could not cast their votes, their candidate lost the election, and Sheikh Abdul Bari, who got votes from his Rampur village, was elected mukhia of the Panchayat.”

The polarisation then led to a series of stand-offs that took a turn for the violent, leaving half a dozen Pasmanda huts in flames—the alleged work of upper-caste goons bent upon bludgeoning down their aspirations. This was late 2007. “On the night of 6 December, nearly 15-20 men came and started pouring kerosene oil over our huts. We came out and tried to stop them, but they went ahead and lit the houses,” says Shaida Khatun, a victim’s widow. The police was rushed in, and cases were filed against the accused, with Pasmandas assured of protection. The incident cemented the social division of Allahpur, and what started as a cry for dignity may end up changing the political fortunes of the state’s leading contenders for power.