A Cockney Chaffinch and the Art of Birdsong

What do bird calls do to human minds? Our brains store away the aural backgrounds to our lives and when we hear strange, unfamilar sounds, we feel alienated. In this personal aural mindscape of ours, birds play a major part 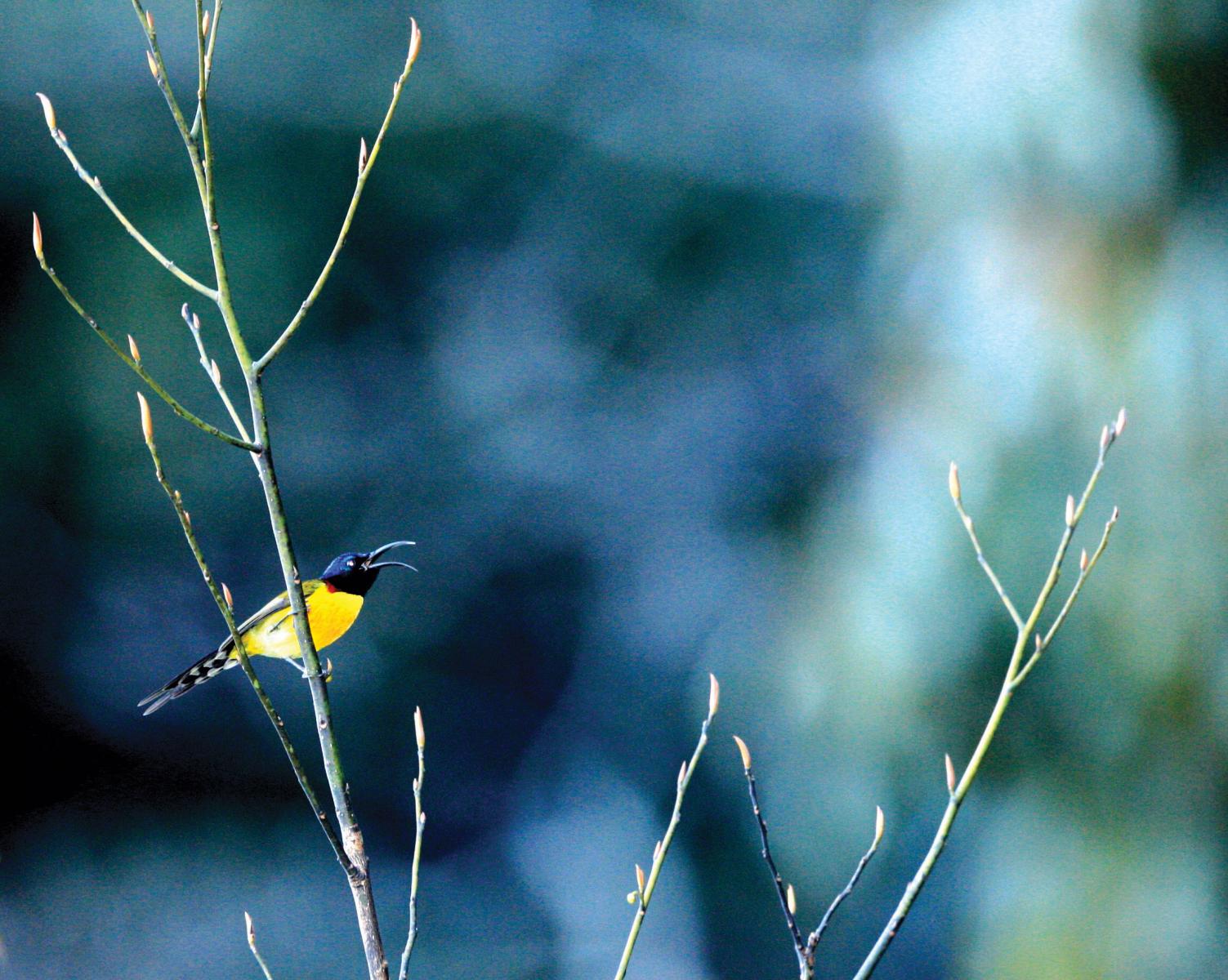 It was on a cold winter morning in St James’ Park, London, that I came across the song of a bird I did not know. The cold was of a winter dawn, raw and unrelenting. Mallards huddled in the morning mist, forming little clusters near the Blue Bridge. Coots dabbled in the shallows, dipping their pale pink bills ever so lightly into the water. An adventurous swan upended, a white yogi doing an icy headstand.

As I walked across from the southern side towards the Horse Guards barracks, a tiny bird erupted in full-throated song. It was ridiculous, this singing in the middle of winter. There could be no good reason to interrupt me so rudely early in the morning. I could see no rival males around, nor could I hear any other birdsong, nor yet a lurking female waiting to be wooed at the crack of dawn. Perhaps it was an unplanned act of defiance against the winter cold, a confrontational chirrup, an audacious aria. Bad enough, I thought, to cut into my reverie without a reason, but worse still the fact that I could not instantly cock my ears and say, ‘Aah! A goldfinch’ or ‘yellowhammer’ or whatever else my early ornithological training had taught me to instantly recognise. The bush hid the perpetrator and the only thing I could do minus binoculars or recording device was memorise the song: chi chichi chi-chettchettchettchett chichi-chichew, chi chichi chi-chettchettchettchett chichi- chichew. A finch it was, most certainly, but which one?

The song stayed in my head all day. I searched for it in the small collection of audio guides on my laptop. I trawled the net using a powerful search engine to try and match the song. But I needn’t have worried, for by evening the truth was revealed. “A chaffinch, of course!” sang Simon Barnes rather loudly, and, to buttress his point, turned on the song of the morning offender on his phone for me to hear. It did not matter that we were in the posh section of the National Gallery café and as the strains of the chaffinch on his phone cut into neighbouring conversations, heads turned, eyebrows arched and glasses of Bellini clinked in consternation. They saw their favourite nature columnist and turned back to their worlds, but I was transfixed. For the call I heard on his phone, the call from the bush, was not of the chaffinch that comes to the Himalayas every winter. I had heard the chaffinch sing in Dharamshala, close to the seat of the Dalai Lama, and it did not sound like this one at all. Both were a short series of descending notes, loud and vigorous, but there was a slight difference. The Indian ones did not seem to go ‘chett- chett-chett-chett’ at all. They were all a series of chis! Small difference for an amateur but enough for me to have not recognised it in one go. Fowl, I know, have their own dialects. The British birds do not make it in the winter all the way to India. The ones we get in India must be of a more southern European lineage. They sing to a different god. Whereas this one, was it perchance, preferred to sing in cockney.

The science of birdsong has been well studied since the 1950s. Birds sing for a variety of reasons, but most of the time it involves getting a better mate or keeping territories free of rivals. In most bird species, especially those that live in temperate zones, only the males sing, but in Australia and southern Africa females of many birds sing as well. All birds call using short, crisp notes that in human terms would be termed a conversation. Some of them even sonate by ruffling feathers or booming vocal sacs and rattling bills. But we don’t call all bird sounds songs. A crow caws, a goose hisses, a parakeet screeches and owls hoot; they don’t sing. Song, a more complex and lengthy series of notes that the human ear labels as melodious, is well developed in the smaller bird forms, especially the passerines. Shelley’s skylark is a classic example of a passerine ‘singing still dost soar, and soaring ever singest’.

One of the first studies on birdsong was by William Thorpe, who kept chaffinch young in isolation, away from adult males. All of them grew up signing odd notes. But the moment they heard older cocks sing, they began to sing like true blue chaffinches. There you go, the study said, it was clear that the birds learnt how to sing in their first year by listening to other birds, overlaying the notes that they heard on a template embedded in their brains. Nurture layering Nature. And then they learnt more variation by practice and innovation. There have been many other studies on the geographical variations of song. Cultural and genetic drift and sexual and natural selection were found to cause many of these variations. Vocal chords and beak sizes also played a part in the dialect that the bird used.

The art of birdsong, on the other hand, has been less studied. What does birdsong do to human minds? At a Minding Animals congress in 2015, I heard a presentation on the contribution of birdsong to the feeling of alienation among migrant humans. What a fantastic thought. An Englishwoman born and bred on robin notes mourned when sent to geriatric isolation in Australia with her children, that ‘the very devil now speaks to me every morning from the bush outside my window’ (I paraphrase from memory). She was referring to the magpie, whose sharp metallic submachine chatter is no doubt a call of great comfort for Aussies.

Our brains, it seems, store away the aural backgrounds to our lives and when we hear strange, unfamiliar sounds, we feel alienated. Clearly, in this personal aural mindscape of ours, birds play a major part. So, I imagine, the Indian immigrant to Birmingham misses the bulbul carousing in the mornings and Africans in America miss the noisy chorus of the superb starling that wakes up the great continent in cacophony. For frequent travellers, I am sure birdsong works better than melatonin to set the body clock right after a night on the red-eye. And what of the birds themselves? Does the migrant chaffinch miss his local mates when he sings in gardens across the seas, or do enough birds move alongside him to let him speak his language unabashed and unbridled?

The song of the chaffinch took me back to another day five years earlier, a milder dawn in the eastern Himalayas. The air was full of the sharp trills of the black faced warbler and a fire-tailed myzornis engaged in an inter-specific singing duel. From deep down in the valleys a satyr tragopan moaned ghoulishly. My eyes were transfixed, however, by what I thought was a barred owlet. Its eyes were shut and it sat motionless on a branch, a small brown fluff screwed tightly onto the flower-laden arm of a magnolia. All of a sudden, a tiny bird shred the air around me. It was a green-tailed sunbird, a common jewel of the eastern skies, screaming out his frustration to all who cared to listen. It was not a song, it was a lambasting of the owl, of the lack of mates in Mayodia, of the unfairness of the world in general, it seemed. As I watched, a miracle occurred. The owl swivelled its head towards me and the sunbird. Large golden-yellow orbs flashed open in alarm. But the eyes had opened from the back of the head. Had I just spent a quarter of an hour gazing at the back of an owl, thinking I was looking at its face? Indeed. The forest owlet of Arunachal has a face painted onto its neck which could fool even a practiced ornithologist and certainly most of its prey. The sunbird had not been fooled though. His song had cut right through the deception and caused the owl to swivel around.

As I write this, I recall that many, many years ago Dr Erach Bharucha, India’s eminent educator-naturalist, had compiled a record of all the bird calls to be heard in India. Perhaps it is time we put together one of all the bird songs. I even have a title for it: ‘Avian Music: The Complete Compositions’.