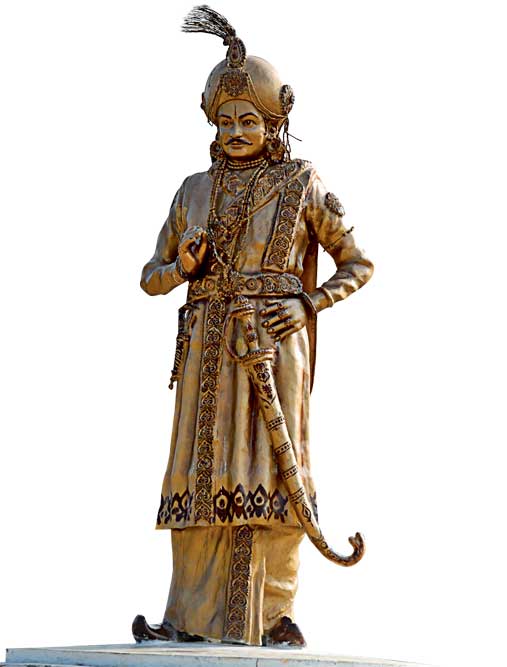 AT THE DAWN of the seventeenth century, decades after Vijayanagar fell before the might of the Sultans of the Deccan, a fascinating new work of poetry took form in the Tamil temple- town of Madurai. The Rayavacakamu (‘Tidings of the King’) is ostensibly about Krishnadeva Raya (reign:1509-1529), but the composition stands out primarily for its polemics against Muslim kings. ‘What are the Turks,’ it declares, ‘but drunkards and opium eaters!’ while Brahmins, with ‘their diet of rice with salt and sambar’, are cast as a vastly better sort who ‘don’t suffer from pride and malice’. Elsewhere, Hindu agents of the Deccan’s Sultans lament how ‘Our lords are drunkards who have no faith in gods and Brahmins. They are,’ these characters cry, ‘barbarians and cow-killers.’ When spies from Vijayanagar travel to the Sultanates, all they witness are the most unspeakable horrors. ‘People were being sliced into two at the waist or slowly cut apart with saws,’ reports one informant, and even officials who fail to deliver gold to their greedy monarchs, are ‘tortured to death’ in ‘the middle of the street’. The lands held by these Sultans—the Nizam Shah of Ahmadnagar, the Adil Shah of Bijapur, and the Qutb Shah of Golconda—are likened to the realms of Yama, god of death, all three rulers painted as vulgar, unrefined upstarts who know neither honour nor true kingly dignity. Dharma as construed in classical texts is elevated, while the adharma of Muslim rulers is violently castigated, boundaries drawn between ‘us’ and ‘them’ in colours that are unprecedented.

The Rayavacakamu is a remarkable text in retrospectively ascribing a hatred of Muslim princes to Krishnadeva’s time. The history of the Deccan shows that in actual fact, however, while rivalries existed, this world was not perceived in terms of communal acrimony as we understand it today. Many, for instance, popularly perceive the 1565 battle that destroyed Vijayanagar as a plot by Muslim monarchs to demolish a Hindu kingdom. The matter is complicated when it is remembered, however, that the ruler of Vijayanagar at the time had spent his early career as a nobleman in the court of a Muslim Sultan. At the battle was also the Qutb Shah who, in turn, had lived seven years in Vijayanagar, married a local woman, learnt Telugu and Teluguised his name from Ibrahim to Abhirama, and formed such an attachment for Hindu traditions that he patronised poetry celebrating the Mahabharata. Similarly, further challenging this notion of a blunt Hindu-Muslim conflict is the little detail that while thousands of Marathas fought in that tragic 1565 battle, their swords were raised not in support of Hindu rulers fated to fall, but of Muslim kings this side of the Tungabhadra. Generals and aristocrats too easily shifted between the Sultanates and the Hindu empire in the south: One, for instance, known as Ain al-Mulk Gilani began his career with the Sultans, but by the 1550s was a prominent courtier in Vijayanagar. Indeed, even a century before, there were high-born Muslims resident at court—Fath Khan, for instance, was a descendant of Firoz Shah Tughluq, who had chosen exile not with fellow Muslims in the Deccan but in Hindu Vijayanagar, where he did his best to persuade the Raya to march with him and seize the throne of Delhi.

The Rayavacakamu does, however, signify a crystallisation among Hindu elites (as opposed to the masses) of a sense of common identity in competition with the ‘Turks’. While its tone has been assessed by scholars to be a result of the fall of Vijayanagar—a ‘culturally disruptive act’ which left large numbers of poets and others without patronage—this mood did not yet, however, lead to what can be construed as a Hindu- Muslim communal divide. For instance, the very same work, while degrading the Deccan’s Sultans as lowborn and mean, elevates the Mughals in Delhi to levels of Sanskritic divinity. Part of this might be on account of Mughal inroads into the Sultans’ lands—they were enemies of an enemy and therefore friends. But what is striking is that the Mughals are painted as blessed by Hindu gods. India, in the conception of the Rayavacakamu, had three ‘Lion-Thrones’: Vijayanagar’s was blessed by Vishnu in Tirupati, Orissa had the blessings of Jagannatha; and the suzerains of Delhi shone in the glory of Visvanatha in Varanasi. These three rulers are likened to the devas or gods of Hindu mythology, while the Sultans of the Deccan are seen as asuras, or demons, inevitably destined for defeat. In other words, while certain Muslim kings are disparaged as barbaric, others are seen as refined; and where the Adil Shah, Qutb Shah, and Nizam Shah are demons, the Mughal Emperor sits confidently among the gods.

What, then, does one make of the Rayavacakamu? There was certainly a notion in the corridors of power of ‘us’ and ‘them’, derived from diverging ideologies of power and statecraft. Where one group designed court culture with Islamic ideals and a Persianised outlook in mind, the other elevated Sanskritic tradition and classical Indian notions to great heights. That one was native to the land, and the other of outside origins was also clear to the poets of this age—Venkatadhvarin’s contemporaneous Visva Gundarasana Campu, for instance, describes Muslims (as usual called ‘Yavanas’, a term originally applied to Greeks) as ‘terrifying’ clans that were a threat to ‘temples of Siva and of Vishnu on his serpent couch.’ The same text, interestingly, also disparages other ‘evil people’ who ‘treat Brahmins with contempt, as if they were no better than blades of grass’—in this case, the ‘evil people’ are Europeans settled in Madras. As early as the mid-fourteenth century, even the very founders of Vijayanagar saw the ‘Turks’ as people different from them. From the 1340s, among the titles flaunted by the Rayas of Vijayanagar was an especially revealing one: they called themselves ‘Hinduraya Suratrana’, or ‘Sultans among Hindu Kings’. The term ‘Hindu’ was one applied by the ‘Turks’ to the native peoples of India. Now, however, it was internalised in Vijayanagar, where the rulers saw themselves consciously as Hindus, even as they also borrowed that new title, ‘Sultan’, introduced to India by the same Turks. Calling themselves ‘Sultans among Hindu Kings’ was to equate themselves to powerful Muslims while at once establishing a cultural difference by asserting their identity as Hindus. The term ‘Sultan’ was an acknowledgment of a new order in India; the term ‘Hindu’ was their self-image in a time when a whole new host of identities had entered the land.

This was not, however, a mass feeling—to the Brahmin on the street, the ‘Turk’ was not more alien than the untouchable. Identities on the ground were diverse and fragmented, and indeed cultural exchanges were exceedingly syncretic. Muslims adopted Hindu habits, and Hindus became disciples of Sufi masters. The annual urs of one particularly famous Sultan was presided over by Shiva-worshipping Lingayats, while among the Bhakti saints in the time of Tukaram and Ramdas was a Muslim student of Advaita philosophy. Against a background of cultural exchange on the ground, texts like the Rayavacakamu were not so much a reflection of reality as much as an articulation of elite political preoccupations, with one or two other agendas. Soon after Vijayanagar was founded, for example, it ejected Muslim rulers from Madurai. The epic Madhuravijayam, on the face of it, is full of laments about the destruction of the dharmic balance by foreigners, with a prince of Vijayanagar restoring order. What is often forgotten, however, is that before Madurai, the Vijayanagar forces destroy another enemy—the Sambuvarayas, who were Hindus. Besides, in painting themselves as restorers of classical high-tradition, the Telugu-Kannada rulers of a new empire were also legitimising themselves in the eyes of their Tamil subjects around Madurai. In showing the Turks as foreign barbarians, they were making their own relative newness to the scene seem less foreign. This formula of using exaggerated metaphor was not new— the hated Muhammad of Ghor, for instance, justified his invasions as the pursuit of an Islamic goal to destroy infidels. And yet, in actual practice, he minted coins with the ‘infidel’ Goddess Lakshmi prominently featured to win approval from his new subjects. Rhetoric was a space in which all kinds of grand designs could be articulated—reality, however, was more a practical negotiation.

From the 1340s, among the titles flaunted by the Rayas of Vijayanagar was an especially revealing one: they called themselves ‘Hinduraya Suratrana’ or ‘Sultans among Hindu Kings’

Muslims, in other words, once they established themselves were given a place in the world-view of Indian rulers. It was not, theoretically, a flattering place, but it was an acceptance of their claim to rule in the Subcontinent. That is why literary sources incorporated Sultans into age-old Sanskrit metaphors. The king of Orissa was the Gajapati (Lord of Elephants); the Raya of Vijayanagar was the Narapati (Lord of Men); and the Sultans of the Deccan (or alternatively, the Mughals) were Ashvapatis (Lords of Horses), linking them also to their military expertise in cavalry warfare. Bukka, one of the founders of Vijayanagar, was celebrated in overblown verse as Krishna reincarnated ‘to deliver the world when it was overpowered by Mlechchas’ (Muslims). A simple reading of this would suggest that the king saw Muslims as enemies. In reality, though, while he certainly had political ambitions in the Deccan, from which he wished to oust local Sultans, to do so he sought the aid of another ‘mlechcha’, the Sultan of Delhi. Turks, furthermore, were to Bukka just one of many other enemy clans to destroy. So in one instance, we have him eulogised as follows: ‘When his sword began to dance on the battle-field, the faces of the [Muslim] Turushkas shrivelled up…the Andhras ran into caves, the Gurjaras lost the use of their limbs…the Kambojas’ courage was broken, the Kalingas suffered defeat.’ Muslims are listed along with other Hindu dynasties and not marked out for any pronounced hostility here. At certain moments, then, texts incorporated them as legitimate members of society, while at other times texts challenged the legitimacy of ‘Turks’ in the Sanskritic order of things. But the presence of the Turks in and of itself was not unusual.

This perhaps explains an action of Krishnadeva Raya in the sixteenth century which is somewhat at odds with the claims and ambitions of the Rayavacakamu a hundred years later. In 1523, the Raya marched into the Deccan, defeated the Muslim powers that existed there, and put their armies to flight. Did he, thereafter, take over their lands or seek to swallow their realms whole? As it happened, he did not. Instead, he resurrected an older Muslim dynasty, the house of the Bahmani Sultans, and by his own royal command had them crowned monarchs of the northern half of the plateau. He did not replace Muslim power in the Deccan with Hindu might in the name of a grand dharmic cause—instead, he restored the legitimacy of a much older Muslim line and placed them in a position of official authority. To commemorate this action, then, Krishnadeva added to his list of styles and titles a fascinating new one in 1523, one that encapsulates the world of the early-modern Deccan: the Raya of Vijayanagar, it was announced to all, was now the ‘Yavana Rajya Sthapana Acharya’—the Hindu king who re-established the kingdom of Turks.

(Manu S Pillai’s new book (Rebel Sultans: The Deccan from Khilji to Shivaji | Juggernaut | Rs599 | 336 pages) tells the story of the Deccan’s Muslim states and their relationship with the Vijayanagar Empire)