Aziz Ansari: ‘I want to take roles away from White actors’ 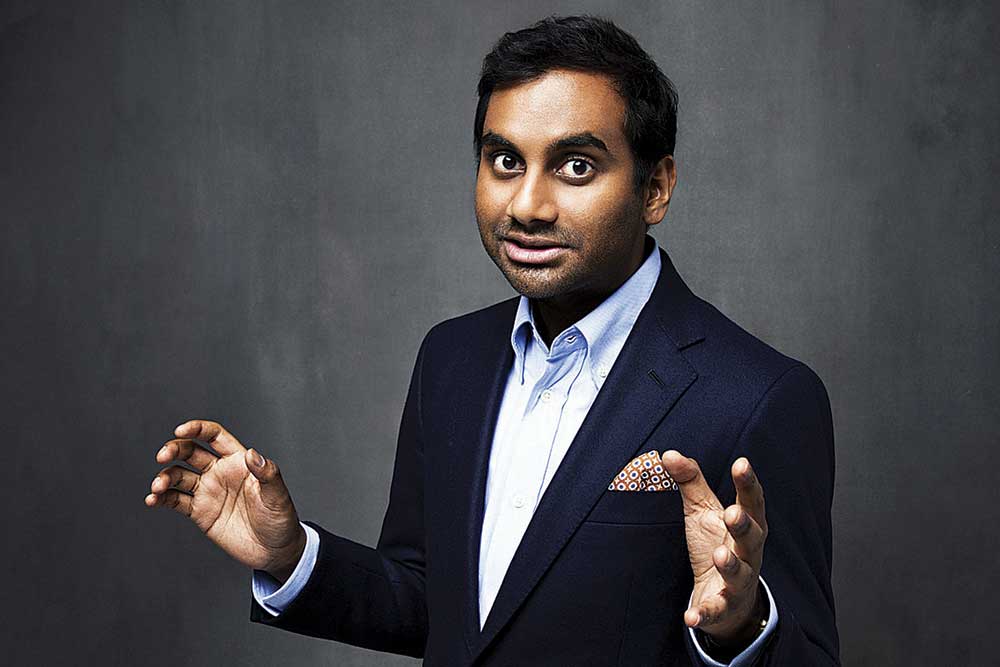 AZIZ ANSARI IS easily one of the most recognisable American actors of Indian origin. He has risen through the ranks of Upright Citizens Brigade Theatre to become a writer, director and lead actor in the Netflix original series, Master of None. Ansari’s hit comedy show has now been renewed for a second season. The title hardly applies to him, though; as the force behind the show, he has walked away with rave reviews and awards. Back in 2015, The New York Times noted: ‘Master of None, the year’s best comedy straight out of the gate, is a lot of things. It’s an adorable but mature rom-com. It’s an idea-packed bulletin on technology and social mores. It’s a showbiz satire. It’s a casually multicultural, multiracial comedy that’s also acutely conscious of how identity still matters.’

Ansari, who started his career with comedy in New York, and made a name for himself in the hit show Parks and Recreation as an underachieving government official, went on to earn a nomination for the Golden Globe Award for Best Actor (Television Series Musical or Comedy) for Master of None.

Thirty-four-year old Ansari is also the author of Modern Romance: An Investigation (2015). The book is about the pitfalls of dating in the modern world and was written with sociologist Eric Klinenberg. The book speaks with empathy and understanding about dealing with relationships today, given the ins and outs of technology. The book is an exploration of ‘how and why the whole culture of finding love and a mate has radically changed’ in the modern era. But it is more than the usual self-help guide because of the rigour and extent of research, aided by Klinenberg, a sociology professor at New York University and author of Going Solo: The Extraordinary Rise and Surprising Appeal of Living Alone. Despite the complications of technology, and all the exasperations with it, Ansari writes in the book, ‘The main thing I’ve learned from this research is that we’re all in it together.’

His motto for Master of None is similar. Although it was written a few years ago, its characters are still relevant. There’s a Taiwanese immigrant and an African-American lesbian. And we are all aware of what the current US administration’s polices are towards immigration and the LGBT community. The show deals with a 30-year-old Indian actor who navigates his life in New York City and it touches upon topics such as relationships, dating and food in an entertaining way. The standout feature of the show is that it is hugely self aware and shows how infinite choice can actually be paralysing for today’s youth. More is not always better.

An interesting element is that Ansari has used his parents Fatima and Shaukath to play his parents on the show. They have their own careers: Shaukath is a gastroenterologist and his mother helps him in his office. Fatima was not so eager to take on the task, but Shaukath jumped at the opportunity. According to Ansari, he had expressed an interest to act when he visited him on the sets of his last television series Parks and Recreation, and had even asked the producers if they could write a part for an older man. Shaukath proves adept at comedy and has received good reviews for his acting abilities. Shaukath and Fatima immigrated to the US from Tamil Nadu and settled in Columbia, South Carolina, where Ansari was born and educated.

In a freewheeling chat in Los Angeles, Ansari opens up about being an actor of colour and reveals that his mantra is simply hard work.

Your career is far removed from that of your parents. How did you choose acting?

When I was in college, I was doing standup, and as I kept doing standup I made some short films, and that led me into acting and more acting and one thing led to another. That is how I got into this profession. I am sure that my parents were not happy about it in the beginning.

When did you become conscious that you were funny?

When I was a kid, I really enjoyed making people laugh. You have to enjoy that and want it to an insane degree if you want to end up doing what I do. Yeah, I remember just loving it when I made people in school laugh—my parents and friends and everybody. Humour has always brought joy into my life.

Tell us about your first break.

I was making short films with friends while I was doing standup and that led to a sketch comedy show that I did for MTV called Human Giant, and that led to all the acting work that I have done since.

It is usually hard for Indian actors to get well-rounded characters. What has been your experience?

When I first started acting, I would get offered parts like, ‘Oh, you’re a cab driver with an Indian accent.’ I just never would do it and so my agents eventually decided, ‘Let’s not bother sending him to auditions, he’s just not going to do it,’ and then I was like, ‘You know, I just want to take roles away from White actors, to steal their parts,’ and that is what I’ve made my career doing.

What are the challenges you’ve faced as an actor of colour?

I mean, to be honest, I don’t think that I faced any challenges due to my ethnicity or race. I think that I faced the challenges that anyone who does comedy faces, and that is that you have to do amazing work and work hard at it. I came up doing standup and standup is such a cool thing in that it’s kind of undeniable. You know, if you tell a joke in a room full of people and they go crazy, it does not matter what you look like. People are going to want to work with you. It’s like, ‘Oh, that guy is very funny.’ And it’s the same with acting. You know, I think it’s just about you working very, very hard and having talent and making great work.

Where does hard work start from?

I think that hard work begins when you start doing standup. You know, there is a difference. You can do standup once a week, and you can say ‘I do standup’, or you can do it a couple of times every night and work really hard polishing your material. If you look at the people who are really successful, they seem to be workaholics; they tour all the time and do shows every night. Take Adam Sandler, for instance; he did his share of tours and clubs and he’s still working all the time making movies. It’s not a coincidence that they are working. They are super hard-working people.

Tell us about your first film 30 Minutes or Less (an American action comedy film), made back in 2011.

It was a buddy movie. Have you ever done anything extreme for a friend?

No, I don’t think I ever did anything extreme for a friend. You sometimes have a falling out with a friend and then you will eventually get back together because you have a long history together and because that is how friendship works. I don’t know if I answered your question…

Master of None has been very well received. Has that affected you?

Yeah, I’m aware of it. But I just focus on the work and try to do work that is both funny and challenging, and work that I am excited about.

I have been very fortunate to be able to create a show that people like and I am grateful that we will be back for a second season. The first season was great and I hope that the second season will be greater. I have been doing standup for the past 15 years and acting for about nine. I think if you work hard it really pays off in the end. I have been very lucky to have been given the opportunities that I have.

What would you tell young people who wish to enter the business?

I will tell them that the thing that really worked for me was to work hard. And make amazing things, be it your standup or short films or the script that you are working on. Just make something really good and eventually people will notice you and you will get what you want to do.

Given that you are a workaholic, what else is on your plate right now?

There are a couple of movies that I have been developing with Judd Apatow and I’m really excited about that and hopefully I’ll get to do them soon. But right now, I’m busy with season two of Master of None.