The Dons of Poorvanchal: Lords of the Ring 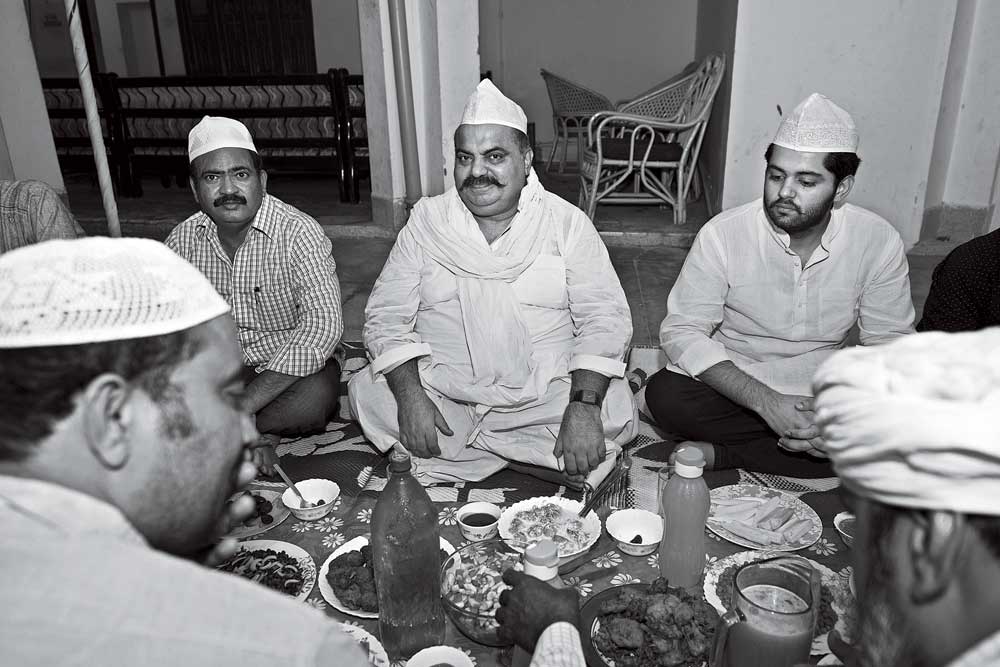 THE SUPPORTERS OF jailed mafioso and MLA Mukhtar Ansari have a special caller tune on their mobile phones. ‘Mukhtar zindabad’, it goes, celebrating his victory over his enemies. The man, who has more than 50 criminal cases against him, wields power over 40 or so Assembly constituencies in the Poorvanchal region of Uttar Pradesh. He is a wanted man in every sense, especially for political parties trying to attract minority votes. So when Samajwadi Party chief Mulayam Singh Yadav decided to take Ansari’s party Quami Ekta Dal (QED) into his fold, it was a strategic move. Ansari had fought the 2012 Assembly elections from jail. He was accused of the murder of his former rival BJP MLA Krishnanand Rai and six others in November 2005. But that did not stand in the way of his victory from Mau for the fourth time. Now, with the Samajwadi Party calling off its merger with the QED citing Ansari’s criminal credentials, it all feels like a drama scripted by Mulayam to project Chief Minister Akhilesh Yadav as a clean politician. Afzal Ansari, Mukhtar’s brother and QED party president, says, “To make a hero of Akhilesh, someone has to play villain. It was my brother this time. It was a trap and we fell into it.” And then he adds, “Mulayam Singh is a habitual turncoat.”

Two days before the just-concluded Rajya Sabha elections of Uttar Pradesh, Shivpal Yadav, state cabinet minister and brother of Mulayam Singh, had gone along with his colleague Balram Yadav to meet Afzal at his residence in Lucknow. They needed the support of two QED MLAs for their Rajya Sabha candidates. But that wasn’t all. On 11 June, the day of the elections, Afzal met Mulayam Singh, who appealed to him to merge his party with the SP. Afzal agreed, in return for the assurance that his people will be allotted a number of seats in eastern UP. As promised, the two MLAs of the QED, including Mukhtar Ansari, voted for SP candidates. (These votes came in handy, what with two of the SP’s own MLAs cross-voting for BJP candidates.) Ten days after the successful collaboration, on 21 June, Shivpal Yadav held a press conference along with Afzal to announce the merger. Hours after this, however, Chief Minister Akhilesh Yadav expressed shock and fury at the inclusion of a criminal in the party. Five days later, the SP parliamentary board decided to cancel the merger. All this was allegedly done to portray Akhilesh Yadav as a leader with a clean image and a development agenda.

“When Mukhtar voted for the SP in the Rajya Sabha, they had no problem with him,” says Afzal. “Now, they conveniently see him as a dreaded criminal who would harm the image of Akhilesh. This is despite the fact that he was not part of the merger and does not hold any position in the party.”

The incident is a throwback to the 2012 Assembly elections, when DP Yadav, a don from western UP, had joined the SP thanks to Mulayam Singh’s efforts. Akhilesh had opposed the decision and the induction was cancelled in a similar fashion. The party believes that it benefited from the decision in the 2012 polls, where it secured a clear majority in the state.

Public posturing aside, the party’s record of harbouring criminals tells a different story. Of its 224 MLAs, 56 have murder and kidnapping cases registered against them. Other parties don’t lag behind in their willingness to accommodate criminals. As much as this is a political risk, collaborating with crime lords is an easy way of securing seats under their control. “There is a winnability factor associated with the mafia in UP,” says Brij Lal, former Director General of Police (DGP) of UP. “Their control over certain regions, especially in Poorvanchal, forces political parties to bend their knees before them.” He deems Mulayam Singh and his family as the worst offenders in this respect.

POORVANCHAL IS TEEMING with dons who make no secret of their political ambitions. With less than a year left for the Assembly elections, they are rearing their heads once again and negotiating with political parties for mutually beneficial arrangements. Mukhtar Ansari is a big name in and around Varanasi. He is currently lodged in Lucknow jail in connection with Rai’s 2005 murder in Ghazipur. Rai and his companions were ambushed while on their way to a cricket match inauguration and shot at with AK47 rifles. The MLA and six others died on the spot. Ansari was in jail at the time of the incident, but the murders were found to have been planned at his house.

Of the Samajwadi Party’s 224 MLAs, 56 have murder and kidnapping cases registered against them

Muslims and the poor of eastern UP, however, prefer to see Ansari as a Robin Hood. He has been close to both the SP and the Bahujan Samaj Party (BSP) in the past. In 2004, when Mulayam was Chief Minister and Ansari was serving time in Ghazipur jail, a fishpond was constructed within the complex so the crime lord would get fresh fish. His brother Afzal has been an MLA for five terms from Mohammadabad and an MP from Ghazipur. Mukhtar Ansari’s clout over certain parts of Poorvanchal is evident from his party’s performance in the last Assembly polls. Of the 44 seats it contested, it won two, came second in three and third in 13 constituencies. There were 19 seats where the party got over 20,000 votes. “We may not win more than two or three seats, but we have the power to influence the outcome in more than 20 seats,” says Afzal. “We went with Mulayam so that secular votes can remain together. But he will now pay for his act.”

On 27 June, BJP President Amit Shah, while addressing a rally in Barabanki, took a dig at Akhilesh Yadav over the decision to cancel the merger with the QED. “You say you will not take Mukhtar Ansari into your party, then what will you do about Atiq Ahmed? Will you also remove him from the party? SP is full of Mukhtars and Atiqs,” he said. Atiq Ahmed, a long-time partyman and former MP from Phoolpur, lost the Shravasti Lok Sabha seat in the 2014 General Election. He has 42 cases pending against him, including 12 charges of murder and attempts to murder, and six kidnapping cases. The most sensational case is the homicide of former BSP MLA Raju Pal in 2005. Pal had defeated Ahmed’s brother Mohammed Ashraf in Allahabad West Assembly constituency. It was 26 January and Pal was going to his village to watch the Republic Day Parade, recounts a senior police officer. He was chased by Ashraf and his men from one end of Allahabad to another before being shot dead. Atiq Ahmed, who is known as the ‘Tiger of Allahabad’, and his brother were charged with complicity in the killing. “The bahubali image is something created by the media,” he says. “There are many poor people who come seeking our help. Sometimes things go too far in trying to help them and a case gets registered. People know what I am. I don’t care who says what.” Ahmed wants an SP ticket for his brother Mohammad Ashraf, but Akhilesh Yadav may have other plans.

LOVED OR FEARED, dons often do get elected in UP. It came as no surprise to anyone when Brijesh Singh alias Don Brijesh won the Varanasi MLC seat this March. Before him, his wife was the MLC from the same seat on a BSP ticket. And before her, it was his brother Udaynath Singh alias Chulbul Singh. Brijesh and Ansari are rivals in the Varanasi region, each commanding a loyal following—Brijesh among Rajputs and Ansari among Muslims. Lodged in jail since 2008, Brijesh has nevertheless pursued a political career that has now endeared his family to the BJP. He tasted defeat in 2012, when he fought an Assembly election on an obscure party symbol from Saidraja in Chandauli district. At the time, there were 39 criminal cases against him in UP and other states. However, his nephew Sushil Singh won the nearby Sakaldiha seat contesting as an independent candidate. Incidentally, Sushil ranks high in the list of MLAs with criminal charges in the current UP Assembly; he faces 20 such cases, including 12 charges related to murder. Rajnath Singh denied him a BJP ticket from Chandauli in the last Lok Sabha elections, but now, after Brijesh’s win in the MLC elections, where he was elected nearly unopposed except for an SP candidate, the family is once again hobnobbing with the BJP in the hope of an Assembly ticket. In August 2014, when Amit Shah came to inaugurate the parliamentary office of Prime Minister Narendra Modi in Ravindrapuri, Varanasi, the man sitting next to him was Sushil Singh. Though he had not joined the party, posters in Varanasi showed Shah and Sushil Singh together.

“There are many factors that contribute to the political rise of criminals in the state. One major factor is caste,” says Brij Lal. “In a society divided on caste lines, one major crime makes you an icon, a protector of the caste you belong to. The party affiliation does not matter; your supporters will rally behind you.” Many criminals therefore contest as independents. Winning without a party’s help glorifies their image and they eventually join any political front that suits them.

Another big name in UP’s Rajput community is Dhananjay Singh, who once had a reward of Rs 50,000 on his head. In the late- 1990s, when Brijesh Singh was on the run, Dhananjay emerged as the new Thakur don of Poorvanchal. He first became an MLA from Rarhi in Jaunpur in 2002 as an independent and later joined the SP. In 2007, he shifted his allegiance to Mayawati and once again became an MLA. In 2009, he was elected BSP MP from Jaunpur amid a row over the mysterious poll-eve death of his nearest rival. A couple of years later, he was suspended from the BSP over his involvement in a double murder case, but he was back in the party soon. Then, in 2013, he and his wife Jagriti were arrested over the murder of his maid at his official residence in Delhi. He was later released on bail but the BSP didn’t consider him for the Jaunpur Lok Sabha seat. He is now gearing up for the Assembly elections. “Frankly, no political party in UP is in a position to get a clear majority. I may contest as an independent,” he says. But he categorically denies any differences with Mayawati.

There will be other such dons in the poll fray, all of them hoping to add some sheen to their muscle power. Munna Bajrangi alias Prem Prakash Singh, who is lodged in Jhansi jail in connection with the murder of Rai, declares himself willing to contest this time. “If not me, my wife would contest elections. I am in talks with all the parties,” he said in Lucknow in March. He fought on an Apna Dal ticket in 2012 from Madiyahoo, but lost. “An election win increases their clout manifold, and if they align with the ruling party, they get rewarded,” says Brij Lal.

But despite the air of victory surrounding them, the crime lords of Poorvanchal aren’t invincible, says Sriram Arun, former DGP of UP. “In the 2014 Lok Sabha elections, 20 noted crime lords including Mukhtar, Atiq, Dhananjay and others lost the elections,” he says. “This is quite encouraging.” This time then, it is a do-or-die battle, both for dons-turned-politicians and for parties looking to make a killing off them.