Still Looking for the Lost 39 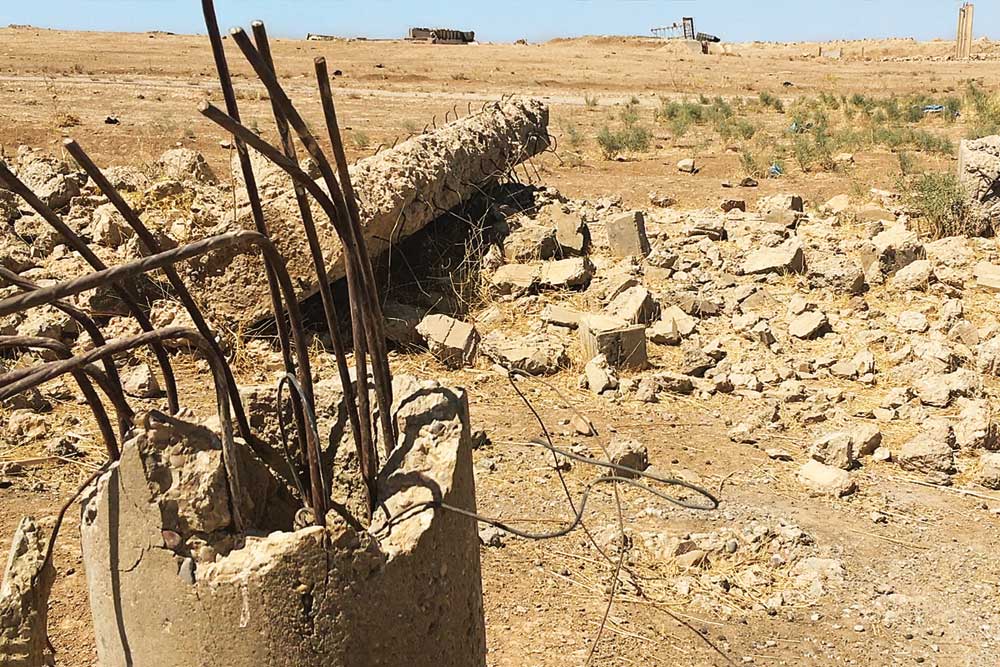 “WE HEARD TWO-THREE Indians were killed.” Atheel al-Nujaifi’s response to the whereabouts of 39 abducted Indians had a dizzying effect on me. As I covered my mouth with my palm and sank into a couch, the former governor of Mosul added, “It is a sensitive matter.”

Seated on a black leather sofa along with two others, Nujaifi was discussing the aftermath of ISIS’s recent fall in Mosul with me. A tall Arab with salt-and-pepper hair, he was not forthcoming on details, but did reluctantly tell me that there was no way to confirm the identities of those killed: “Because we don’t know where they are now or if they are Indians or other South Asians, or if this is just hearsay.”

The ambiguity he cast on his earlier unsettling statement left me suspicious if Nujaifi, the most powerful man in the city before ISIS’s 2014 onslaught, was changing his stance on seeing my reaction or such was the nature of intelligence emanating from Mosul. Accused of letting ISIS walk in and claim the city without resistance in June that year, Nujaifi had fled some 90 km east to the Kurdistan Regional Government’s (KRG) capital of Erbil in northern Iraq, but kept in touch with his moles back in the city. As a man close to the Sunni tribes that had struck an understanding with ISIS, Nujaifi was well placed to offer clues. Given his Turkish links, he is also believed to have played a role in Turkey’s safe rescue of its Mosul consular staff. In September 2014, 49 Turkish hostages held by ISIS were evacuated from that city via Raqqa. Turkey was reported to have used ‘local connections’ to get ISIS to release its citizens and also tracked their movements with UAV surveillance.

In comparison, the Indian Government’s efforts to trace its citizens missing since mid-2014 seem rather pale. Relying on inputs from other governments and their apparatus—including Iraq’s—New Delhi had told their families that they were alive. According to a high-level source in the Government engaged in the search, however, even the governments that India spoke to were largely in the dark about what was happening in Mosul.

After the Iraqi army vacated the city, ISIS had turned Mosul into a fortress. The group used the fear it generated through its grotesque acts as drawbridge spikes to keep out intruders. After Abu Bakr al-Baghdadi announced his caliphate in July 2014 from the pulpit of the Al Nuri Mosque, Mosul became impenetrable. Until July this year, journalists could go only up to the border manned by KRG’s Peshmerga forces in Erbil and NGOs like the Iraqi Red Crescent were also restricted to the city’s outskirts.

On June 29th , 2014, India’s External Affairs Minister Sushma Swaraj quoted a Red Crescent source to state that the Indians were reportedly safe. The Government didn’t reveal who exactly this source was in a bid for secrecy that was expected to aid the rescue effort, but during my visit to Mosul this July, it was clear that the Red Crescent lead had gone cold as far back as September, maybe even earlier, in 2014.

Hawre Ihsan Sadiq, a manager of the Iraqi Red Crescent, denied having any information on the 39 Indians or sharing anything with the Indian Government. Sadiq, who had headed the NGO’s Erbil branch since September 2014, said that if there was any news of them, he would have heard from field volunteers at work around Mosul. “For three years, ISIS controlled Mosul, and we didn’t have any information,” he told me at his office in Erbil.

In 2014, the Ministry of External Affairs received a letter from the Indian Ambassador in Baghdad, confirming that the citizens are alive. But the Ministry didn’t answer queries on what it did with that information

In June 2014, the Ministry of External Affairs had received a letter from the Indian Ambassador in Baghdad confirming that the Red Crescent had informed him of the citizens being alive. But the Ministry did not answer queries on what it did with that information. This lack of clarity was to persist.

Days after ISIS’s defeat, on July 18th this year, I set off from Erbil for Mosul and Badush. Hopes of locating the 39 had risen again. India’s Minister of State for External Affairs General VK Singh had visited Erbil a few days earlier on a tour of Iraq that included Baghdad (but not Mosul), and upon his return to Delhi, his senior minister met the families of the missing and told the press that the 39 Indians had been held captive in Badush and more would be known only once peace was restored there. The following is what Swaraj said on July 16th: “General Singh has received confirmed information from a senior Iraqi official that first they were used for hospital reconstruction, then they were used for farming, then they were sent to Badush prison. But since they were sent to Badush prison, the intelligence agencies do not have any additional information. That is why once the fighting in Badush ends, when the area is cleared, only then will we know what their situation is now.”

Hoping to locate them in Badush, I hired a local translator and joined an entourage of Western journalists covering the fall of Mosul. After crossing the checkpoint run by the Peshmerga on the Erbil-Mosul border and several others manned by the Iraqi Federal Police (as well as Shia paramilitary units), I reached West Mosul and met Brigadier Abdul Amir al-Kazraji of the elite Golden Division, the country’s counter-terrorism unit trained by the US which had fought the ISIS in Mosul.

Having taken his daughter to India for health treatment, the brigadier said he was pleased to help an Indian journalist. When I requested permission to visit Badush, he was puzzled. “Why do you want to go to Badush prison?” he asked, “It was demolished months ago.” Refusing to believe him, I insisted on confirming this with my own eyes.

Mosul was in ruins and largely deserted as we drove through. Only the old city was congested, but this part of town was under the danger of sniper fire from ISIS remnants. The path to Badush was relatively safe. With desert on either side of the stretch, the risk of an ISIS attack was minimal. Moreover, it had been secured by Iraqi forces and Shia paramilitary groups.

“This is it,” the translator announced after a 20-minute drive escorted by a Humvee. All that could be seen was another set of ruins where the prison once stood.

Compounding matters is the Ministry’s denial of Harjit Singh Masih’s testimony, the only one to escape among the 40. He told the Government that the rest had been killed

The brigadier was right. Badush prison had been demolished. In June 2014, ISIS forces had stormed the jail, freed some 300 prisoners of its own hard-line Islamist persuasion, and attacked about 600 others. A large number were killed. It isn’t clear if the 39 Indians were among them, but the mass murder of non-Sunnis and other minorities in and around this site is now a matter of factual record.

Standing in the middle of the desert, facing the debris of the prison, I wondered why did the Indian Government had made no mention of the demolition. There are only a few plausible explanations. Either New Delhi was deliberately being economical with the truth or its machinery had failed to check on a lead provided by the Iraqi government. Once General Singh was told by the senior Iraqi official of Indians being taken to Badush, the obvious step would have been to probe the prison’s status. Since there was no fighting in Badush and the region’s roads had been secured, a visit could have been arranged for Indian officials. It is perplexing why a picture was presented in India that was at odds with ground reality in Iraq.

ONE SUPPOSITION WAS that ISIS could have takenthe Indian abductees to Tel Afar in Iraq, which is 63 km from Mosul, or to Raqqa in Syria. Tel Afar, which is dominated by Turkmani Shias, was reclaimed from ISIS on August 27th, an exercise in which a paramilitary group drawn from the community played a significant role.

On October 15th, I met Commander Zakey Kamaal of the Turkmani force whose friends had fought in Tel Afar while he was posted in Kirkuk. He was seated at his camp under a life-size picture of Ayatollah Ali al-Sistani, and I asked him if he had any information on the 39 Indians. Could they have been taken to Tel Afar? “There is no news of any Indian hostages or prisoners,” he replied.

In August, I had visited Syria and pleaded for permission to go to Raqqa, which was still under ISIS control. I was denied a go- ahead to visit the group’s last stronghold, but was able to secure an interview with Dr Bouthana Shabaan, who’s considered close to Syrian President Assad. Dr Shabaan seemed confounded by my question on the 39 missing Indians. “If they were captured in Mosul, the Iraqi government would know,” she said. When I asked if ISIS could have brought the hostages to Raqqa or anywhere else in Syria, she said, “Raqqa has been under ISIS’s control and we don’t have any information from there.”

It was US-led forces that eventually ousted ISIS from Raqqa, its self-proclaimed capital, and declared victory there on October 17th, the date that is taken to mark the group’s defeat.

While ISIS has been vanquished, there is no respite for the families of the 39 Indians who were abducted by it more than three years ago. In the last week of October, General Singh made another visit to Iraq—this time including Mosul—for a ground check. According to him, he visited all the areas where the Indians were suspected to be at one point or another, but couldn’t find any fresh clues. The minister has provided the Iraqi government with DNA samples of the missing Indians for it to match with the dead.

The puzzle of their fate endures. Compounding matters is the Ministry’s denial of the testimony of Harjit Singh Masih, the only one who managed to escape among the 40 who were originally taken hostage. He told the Government that the Indians had been killed, but the Ministry has kept up the search. While answering a question in Parliament after my first report from Mosul in July 2017, the minister had said, “How did Masih escape? This mystery will also be revealed soon.”

The revelation is yet to be made. According to a report in the New York Times, ISIS still controls about 10,000 sq km of territory along the Euphrates river, even while the remaining members of the group are running for their lives. It is unlikely that they have hostages with them. But this is no comfort for the families of the 39 who had gone to Iraq to make a living.