Erdoğan: The Half President

A dictatorship is taking shape on the Bosphorus. Anchal Vohra in Istanbul captures the fears and anxieties of post-referendum Turkey 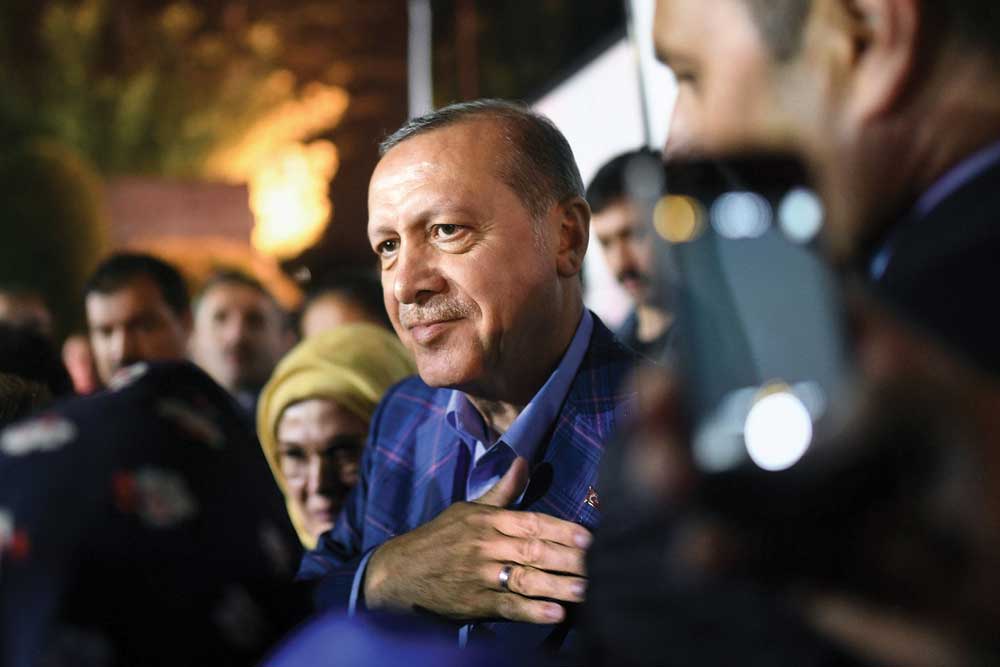 “WE ARE THE resistance, why be scared? This president is scared of us.” These were the words of a 26-year-old engineer seconds before he was arrested by state security officials, singled out for speaking to a journalist. He had hoped to evade the cops by mixing in the busy streets of Beşiktaş and had me race him for an interview. But our brisk walk and quick turns didn’t help. Dressed in plain clothes, three men appeared on the scene. They pulled him by the collar, grabbed him by the wrist, pushed me aside and started yelling. Unnerved, I lifted my phone to take pictures, as an elderly official with a walkie-talkie emerged from behind wagging a finger as a warning—I had better not.

Reminded of the stories of journalists in Turkey’s prisons, I hurriedly hailed a taxi. A minute later, as I caught my breath and took some shots from the other side of the street, the engineer had vanished. All of it lasted five minutes, but is a daily affair under Recep Tayyip Erdoğan’s regime many months after the official state of emergency imposed in mid-2016 after an alleged coup attempt.

When 40,000 people have been arrested in less than a year, does one more really count? A few minutes afterwards, when I returned to the group to inquire about the engineer, a girl screamed, “They have taken our friend, they have taken him.” Looking over their shoulders, the young group of 10-15 protestors dispersed, getting in and out of cafes and pubs, and then vanished into the crowd on the street, unrecognisable amidst the moving heads.

Wading through the oblivious masses, the man I’d spoken to had called President Erdoğan a thief and a liar. “He has stolen our votes. He asked the High Election Board to count the 2.5 million unsealed votes as ‘Yes’ votes. We had won, not him.”

That accusation is at the heart of the disputed legitimacy of the April 16th referendum that has officially provided the president with sweeping powers in Turkey. Erdoğan claimed a narrow victory, with the election board announcing a 51.45 per cent ‘Yes’ vote and 48.6 per cent ‘No’ vote. But the ‘Yes’ count, granting Erdoğan what he wanted, includes the 2.5 million unsealed votes. According to Turkish law, it is illegal to accept unsealed votes, says Professor Ersan Şen, who teaches at the political sciences faculty of Istanbul University: “If there is no seal on the envelope, neither the Higher Election board nor anyone else can accept it as valid; they cannot put themselves above the law.”

Andrej Hunko, a German lawmaker who observed the election on behalf of the Council of Europe, tells Open in an exclusive interview that the referendum didn’t meet the Council’s expectations. “In our opinion,” he says, “the government misused state resources blatantly. During the election the High Electoral Board changed the rules and allowed around 2.5 million of unstamped ballots to be used, which is against the Turkish electoral law. We see it as highly likely that these ballots were tampered to influence the stand-off between ‘Yes’ and ‘No’ in favour of Erdoğan.”

Turkey is split down the middle. Even a 51.4 per cent win is marginal for a man who imposed an emergency, made it difficult for the opposition to campaign, arrested thousands, and crushed all his opposition. Says a Turkish academic who wishes to stay anonymous for reasons of security, “Erdoğan realises even a 51 per cent is a ‘No’ vote and that makes him very dangerous right now.”

Despite the danger, at 7:30 every other evening, the ‘resistance’ organises anti-Erdoğan demonstrations in Istanbul’s Kadıköy, Bakırköy and Beşiktaş areas. All these neighbourhoods overwhelmingly voted ‘No’. The protestors find support in these localities and find it easier to hide from the police. At a time of uncertainty over civil rights, the value of this is significant.

The gathering is composed mostly of young students but also middle-age professionals. Banners call for an annulment of the referendum and equal campaigning rights if and when a new one is announced. Posters refute the charge that they are terrorists and traitors, as the Erdoğan camp has smeared dissenters, while also countering the religion-based rhetoric of the ruling AKP. For instance, to ‘Yes’ camp cartoons that say, ‘Monster asks Satan, how did you end up in hell? Satan answers, God wanted all angels to submit to him and I said no’, ‘No’ camp posters respond, ‘Even God has delegated his powers amongst his angels… and sent many prophets not one’, implying that power should not be concentrated in one man’s hands.

It’s clear that the numbers at ‘No’ rallies are steadily going down. Naysayer bastions like Beşiktaş draw fewer participants now, even when the protest points are located amidst clubs packed with Kemalist youth

Such exchanges reflect a deep ideological fault-line in Turkish society between secular Kemalists and Erdoğan’s Islamist followers. The slogans of the former hail the country’s modernist founder Kemal Ataturk and denounce the ‘Muslim Brother’ (a reference to the Muslim Brotherhood) in power, as they call Erdoğan, accusing him of wearing a sultan’s crown in the name of executive presidency.

Since referendum day, the streets have also been resonant with slogans daring the president. ‘Neither the Sharia, nor fascism, nor the presidential system will pass’, goes one. ‘Don’t bend your neck, Beşiktaş, don’t sleep, assume responsibility for your country,’ goes another, rousing the locality to resist the president.

Yet, it’s also clear that the numbers at ‘No’ rallies are steadily going down. Naysayer bastions like Beşiktaş now draw fewer participants, even when the protest points are located amidst clubs packed with ostensibly Kemalist youth. Chatting with some of them reveals that it isn’t a wavering commitment to the cause but the fear of incarceration that is leading liberals to be cautious. The resistance also suffers from a lack of leadership, apart from an incohesive strategy and unclear objectives. The organisation of protests, for example, is ad hoc, and is typically planned by local groups on WhatsApp and conveyed through social media to trusted friends.

On display is ample emotion, but the effort has little coordination, no face and no long-term vision.

Gurkan Ozturan, a journalist and a regular at ‘No’ rallies, isn’t ready to dismiss the protests, however. “On the 17th, a day after the results, 11 cities across Turkey held demonstrations,” he says, “Today there are 15. In Istanbul, it is the young people; in my town of Kırklareli, the pensioners are organising it. I don’t think [the movement] is dying, it is expanding and prolonging [itself].” Pointing to a growing culture of peaceful protests, Ozturan talks about the internet-rights protest of 2009 and the Gezi Park resistance of 2013 which began to block a shopping mall from coming up on the park but turned into an expression of civil disobedience to several policies of the Erdoğan government. The undermining of Turkey’s secular values and encroachment on journalistic freedom were among the issues.

For Ozturan, the state’s crackdown on independent minded journalism—some 140 journalists have been arrested since the failed coup last July—is a personal issue. He talks about the treatment meted out to friends in jail and his fear that one day it might be him. “In prison, [friends] ask you for a towel, soap and fresh underwear. This gives you an idea of how they are being treated. They have been arrested for questioning the referendum and insulting the president, both of which they have a right to. I think I too will get a knock on my door one of these nights. They generally arrest people at 4:30 in the morning from their homes.”

Journalists that are not imprisoned are co-opted. Worried it might get worse, Ozturan is training citizen journalists and using media content generated by them. “The Hürriyet newspaper is the latest tragedy. It has been sold off to Qataris; many of their journalists are moving to Germany. Daily Sabah was taken over ten years ago and is effectively a government mouthpiece. A reporter of TRT, Turkey’s global news channel, was just fired for going live with anti- Erdoğan protests on ‘Periscope’. Cumhuriyet, the last independent media remaining, is facing financial problems too.”

Nineteen employees of Cumhuriyat, including at least five journalists, have been jailed for over six months on terror charges. Kadri Gursel’s wife Nazire has been forced into single parenthood. “He lives with two people and there are no common areas to play or watch television,” she says of her husband, “these are the only people he sees 24 hours. Isolation is the torture tool being used to break him.” As the institutions that assure people their rights crumble around her, she expects help from the EU. “Everyone knows this referendum isn’t fair. The European countries must step in. That’s the only way I see any change or I have no hope.”

Turkey is not a member of European Union, but it is a part of the European Council. So what can Europe do, if anything? Andrej Hunko, the German politician appointed to observe the referendum, says, “I think the most important thing to do now is to end the cooperation with the Turkish government in many areas. Freezing the EU accession negotiations would be one first step. The negotiations over a Turkey-EU customs union must be stopped immediately. Soon we will hold discussions at the parliamentarian assembly in Strasbourg, where the situation after the coup and referendum will be on the agenda.”

Geographically, Erdoğan has Europe by the neck in a way. Turkey, wedged between the continent and Asia, has a long border with Syria that lets it control the inflow of refugees— a vast area of concern within the EU. Given the current dynamics, it is hard to gauge if Germany would offer more than lip-service on political rights to Turks arbitrarily deprived of these.

With Turkish nationalists supporting Erdoğan and a weak domestic political opposition, the forces of dissent on the ground are too badly splintered to make a cohesive push for Kemalist values. The protestors themselves are in no position to do much, but with his thin—and disputed—margin of victory, Erdoğan may act like a sultan but is only half a president.

A DAY AFTER THE engineer’s arrest in Beşiktaş, the police had set up several check-points to quell the revolt as swiftly as they could. But, unafraid, in a bustling bazaar of thousands, a few odd heads were still bobbing up and down, asserting themselves, challenging the appearance of normalcy and navigating their way through a crowd to converge at yet another protest point. These bravehearts are few, but they represent the other half.