Bengaluru: A City in Distress

The civic struggle to regain the legend of Bengaluru 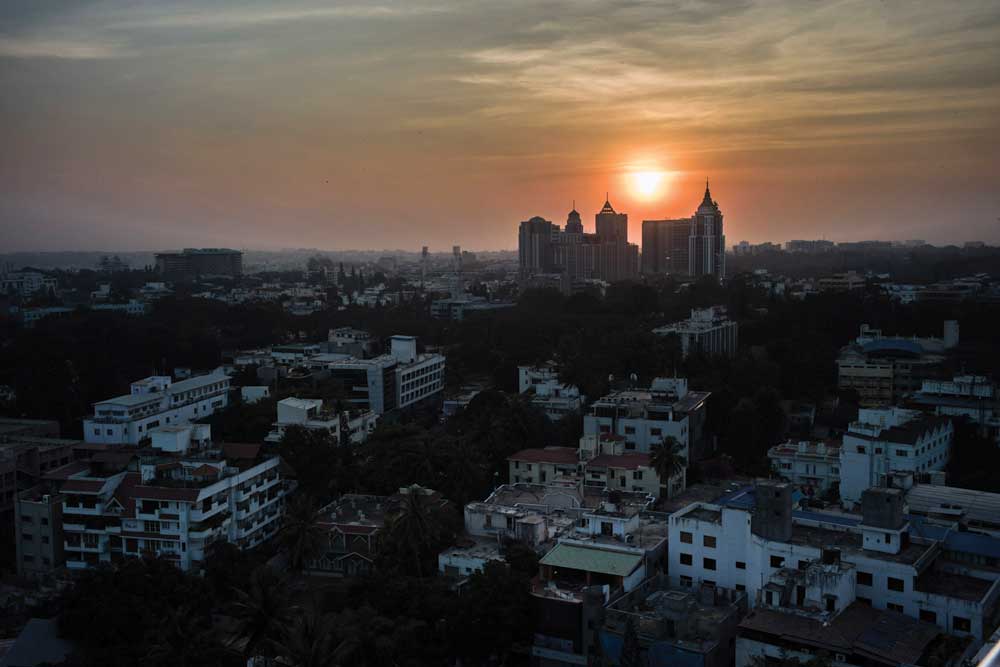 On a Monday afternoon in October, when her two sons weren’t home, 51-year-old S Mangala set out for the Bangalore Development Authority (BDA) head office on a BMTC bus, clutching her bag close. She had made the journey dozens of times, but today a rush of thoughts flooded over her as she crossed Kanteerava Studio, the hallowed ground where Kannada film icon Rajkumar was laid to rest in 2006. In 1982, her father had given her a parcel of land not far from here in Nandini Layout. The family could only afford to build a sheet-roofed house, where her children, Hemanth and Karthik, grew up, the elder one studying Mechanical Engineering and the younger, Interior Design. Bengaluru in the 90s was caught in the inescapable rhythms of development and Nandini Layout, a humble neighbourhood adjoining the industrial suburbs of north Bengaluru, suddenly reverberated with the ceaseless roar of cars motoring down the new Outer Ring Road. The boys’ dreams soared like those cars. Serendipitously, their house was on a corner plot flanking the road and a commercial building here could earn them lakhs of rupees in rent. By 2005, their dreams, it seemed, had come to pass. They moved to a smaller portion on the first floor of the building, making way for five tenants and reaping a rental income of Rs 70,000 per month, much of which was used to pay back the Rs 15 lakh loan they had taken to build the three-storey structure.

Mangala and her family had no reason to begrudge the IT boom or bemoan the city’s changing contours. They were beneficiaries of the manic growth—up until 2013, when, by cruel paradox, it came back to bite them. On October 24th, 2016, as Mangala approached the BDA head office in Kumara Park one last time, she remembered the day they were served a notice requiring them to give up their 1,900 sq ft of land for the construction of a grade separator. She had panicked, only to be reassured that there was hope yet. In fact, they could be richer by Rs 4.4 crore if the BDA paid market price for the land. Once the tenants vacated, however, Mangala and Karthik were staring at a stultifying delay in the BDA’s authorisation of compensation. A hail of indignities fell on them as their money ran out and creditors knocked on their door. Then Mangala saw a way out of the quicksand of bureaucracy and came to the BDA to set things right once and for all. She would consume poison and risk her life—in exchange for securing her family’s future. Sure enough, Mangala’s attempt at suicide made headlines and forced the BDA to release Rs 75 lakh to her in a week’s time—the rest is still mired in process. “About 80 properties are affected by the underpass. We aren’t opposed to the project, but development should not happen at the cost of someone’s life,” says Karthik, 31, who credits Mahalakshmi Layout MLA K Gopalaiah for taking up their cause with the BDA. Karthik cannot forgive his mother for pulling a dangerous stunt, but to her, the government’s long silence had seemed like death itself.

Bengaluru, like any other metropolis, is built on the gnawing anxieties of its millions. The Nandini Layout episode comes at a time when the BDA is getting rapped for other indiscretions. Even as three big projects in the city—the flyover at Hennur and the railway overbridges at Byappanahalli and Goraguntepalya— lay stalled, years behind schedule, the BDA, at the behest of the Congress government, has proposed a Rs 1,791-crore steel flyover from Basaveshwara Circle to Hebbal that was never in the city’s Comprehensive Development Plan. Tearing through the heart of the city, and felling over 800 old trees, the six-lane flyover is meant to ease traffic headed towards the airport, and could serve up to 270,000 vehicles in a day, according to the BDA. The idea, originally mooted three years ago, shelved and then revived last month by the cabinet, has met with staunch opposition from citizen groups. “Evidently, the BDA can muster Rs 1,800 crore for a 60,000-tonne flyover, but not Rs 131 crore to compensate the land losers of Nandini Layout,” says Gopalaiah. The high cost of the project and the fact that the BDA refused to part with its technical details have led people to question the motives of the Siddaramaiah government ahead of the 2018 Assembly elections.

According to a recent study by the Indian Institute of Science , there has been a 125 per cent increase in built-up area in Bengaluru since 2010, a decrease in green cover by 62 per cent and in water bodies by 85 per cent

Officials in the BDA are on edge. “There has never been such a brazen and unscientific proposal in the history of the BDA,” says Sridhar Pabbisetty, CEO of the Namma Bengaluru Foundation, which filed a PIL in the High Court against the flyover. “It is an agency that has outlived its purpose.”

BDA Commissioner Rajkumar Khatri measures his words. “Everyone wants development,” he says. “On how to achieve it, there are different ideas. We are listening to citizens and we will reach a balance.” There is a reason he treads with caution. The steel flyover has united educated Bengaluruans like few other civic issues have, with 8,000 of them taking to the streets and waging Twitter wars and making videos. Urban planners have offered alternatives to the flyover, including linking up the NICE road, adding 6,000 buses to the BMTC’s fleet of 6,600, speeding up Metro work and developing a suburban rail network on existing tracks. The National Green Tribunal has issued an interim stay order halting work on the flyover for four weeks until an environmental assessment can be done. The government, however, is intent on going ahead with the project, to be completed in two years by L&T. It has also proposed, in its 2016-17 budget, building 100 km of elevated roads running from north to south and east to west at a cost of Rs 18,000 crore.

THAT BENGALURU NEEDS improved infrastructure is stating the obvious. According to a recent study by the Centre for Ecological Sciences at the Indian Institute of Science that has been labelled ‘alarmist’ by some, there has been a 125 per cent increase in built-up area in Bengaluru since 2010, a decrease in green cover by 62 per cent and in water bodies by 85 per cent. With over 600,000 registered vehicles—120,000 of them cars—for a population of 12 million, traffic management has become an insurmountable challenge. Recently, an eight-year-old boy wrote to Prime Minister Narendra Modi about how it takes him 45 minutes to cover the three-km distance from his home to his school in Yeswantpur thanks to the incomplete railway overbridge at Goraguntepalya. The Prime Minister’s office was moved enough to respond, but the traffic on Outer Ring Road shows no signs of budging.

In Bengaluru now, the steel flyover and other auxiliary issues involving mobility are ushering in a paradigm shift in civic activism. It is trench warfare by citizens against expensive quick fixes

So, are concrete spaghetti junctions and steel highways wrapping around the city the only way forward? Industries Minister RV Deshpande says elevated corridors and ring roads tend to inspire confidence in new investors. “Bengaluru has become a brand. In spite of the infrastructural problems, people want to invest here. But this cannot continue for long,” he warns. In the first half of 2016, Karnataka trumped Gujarat as the top investment destination, attracting Rs 67,757 crore as against Gujarat’s Rs 21,309 crore. But it has slipped to the 13th spot on ‘ease of doing business’. Part of the problem is that the intellectual climate conflates development with new construction, says Naresh Narasimhan, a senior architect and urban planner who has been leading the civic movement against the steel flyover. “The BDA lives in the 20th century, when oil was abundant. Cities like London are switching to bicycles. We can start with adding buses and making them directional instead of destination-based so they can serve more commuters,” he says.

Every city, says Narasimhan, has a Jane Jacobs moment, and Bengaluru’s is round the corner. In mid-20th century New York, Jacobs, an intrepid journalist and a mother, took on powerful city planner Robert Moses to stop him from carving up lower Manhattan with an expressway. She mobilised citizens, experts and people in positions of power to speak up against the top- down approach to city planning. Jacobs’ book espousing liveable neighbourhoods, mixed-use buildings, public spaces and mobility-oriented planning has since significantly shaped the thinking of urban planners. In Bengaluru now, the steel flyover and other auxiliary issues involving mobility are ushering in a paradigm shift in civic activism. This is no ordinary demurral. It is trench warfare by citizens against expensive quick-fixes.

The city’s middle-class has shed its civic apathy and set aside divisive issues like Kannada identity to come together for common causes, says Prakash Belawadi, noted theatre artiste and activist. “Never before has Bengaluru had a sustained campaign. Part of it is because of social media. Nine years ago, when I organised a public hearing to involve citizens in planning the Metro, no one turned up. A bunch of us waited outside Ravindra Kalakshetra and nothing happened. The Metro went overground and we had no say in it,” he says. This time around, he didn’t have to work the backchannels to be heard by the government. “I think people have seen what flyovers do—they move traffic jams from one spot to another. When Bengaluru started to boom in the 90s, we weren’t geared to understand what was happening. Those of us who were concerned were fooled by politicians into believing that they were going to build satellite towns and large parks the size of Lalbagh. Now that I think about it, I wasted time on faux conflicts about outsiders. We understand now that the common causes are more important: traffic, pollution, trees, lakes. Pro- Kannada groups have approached me, offering to support our movement,” says Belawadi, joking that he has started signing as ‘mechanical engineer’ instead of ‘theatre artiste’.

For those who have made India’s Silicon Valley their home in recent years, a languorous disappointment is setting in. Radhika and Anant Gowtham, a couple in their forties, moved to Varthur near Whitefield two years ago from Mumbai because they thought Bengaluru would offer a better business environment for their office services aggregator startup. “Bengaluru won hands down in terms of cost of office space (Rs 5,000 per sq ft or less for offices outside CBD and the startup enclaves of Koramangala and Indiranagar), availability of talent and investor density,” says Radhika, mother to a nine-year-old. The Gowthams bought the spacious top floor of a single-building development—“I did not want my daughter growing up in a gated community,” she says—a decision they have since come to regret. Living just a kilometre from Varthur Lake, one of Bengaluru’s infamous waterbodies that often foam over or catch fire due to the raw sewage pouring into them, they worry about the health hazard and are looking for accommodation in Indiranagar, one of the city’s most expensive neighbourhoods. “The city is unable to expand outward because of serious infrastructural problems. It is not just traffic and roads. Everything is unplanned, even water supply and drainage,” says Anant. “If this isn’t resolved, we will be creating an urban underclass that is pushed to the corners of the city without access to good housing and sanitation.”

The soiled glory of Bengaluru as a city of blunderous ‘Magic Box’ underpasses and potholes that could break one’s back continues to spread. But now, instead of wagging their heads reproachfully, citizens are demanding that their 136 remaining lakes be preserved and the 1,000 others reclaimed, that cataclysmic projects be re-evaluated, and that public utilities be managed by democratic institutions. This is true progress, an involved people trying to redeem a beautiful city gone astray. 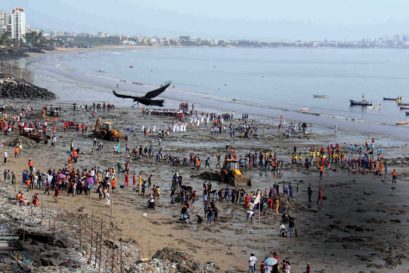