The Problem with Defence Acquisitions

The victim is national security 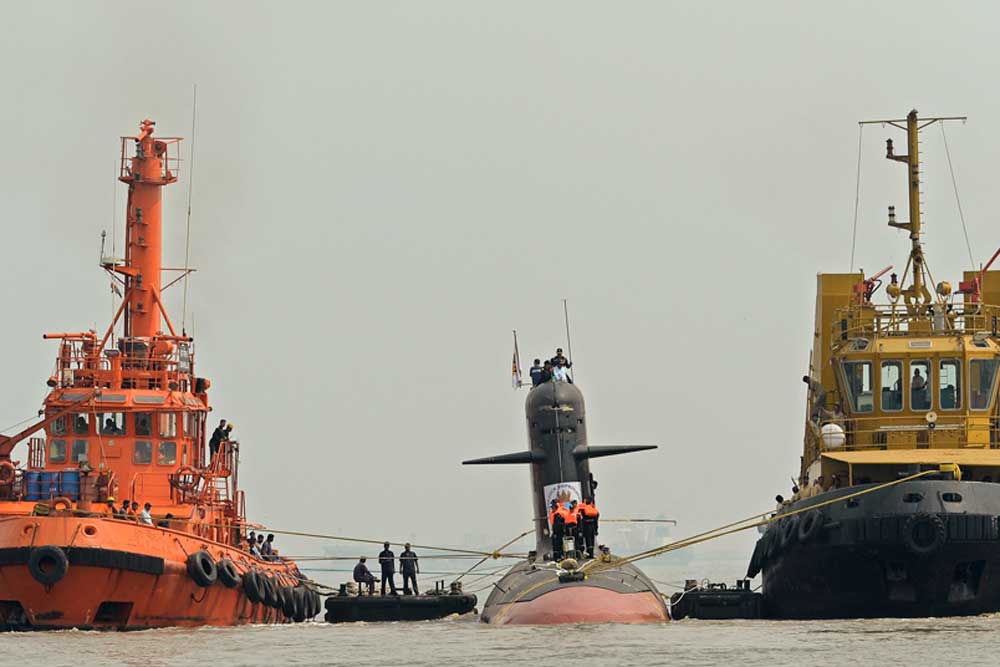 India has indigenously designed and built (mostly in the private sector) the Arihant-class nuclear powered ballistic missile firing submarine (SSBN), the most potent weapon system in any arsenal. And yet the Government has agreed with the Navy that India cannot build the 70 per cent less complex conventional diesel submarine (Project 75i) and that another Scorpene-like exorbitantly-priced contract costing tens of billions of dollars is necessary.

In 1998, the country obtained the Kilo-class boats from Russia for Rs 100 crore each, but subsequently forked out Rs 6,000 crore per French Scorpene submarine (Project 75) put together by the defence public sector unit (DPSU), Mazgaon Dockyard Ltd (MDL). It took 15 years to build the first Arihant SSBN, and only 12 years to construct the second of this type (Arighat), exactly the time taken by MDL to deliver the first Scorpene submersible (Kalvari). This is normal for DPSUs with no known talent for technology absorption. The private sector giant Larsen &Toubro (L&T), having mastered the complicated production schemata of multiple redundancies for each system in nuclear-powered vessels, has produced the Arihant with 80 per cent indigenous content by value; and Arighat with 85 per cent. Compare this with the Indian Scorpene with 85 per cent foreign content, which will decrease to 30 per cent by the sixth and last Scorpene.

Compare this state of affairs with the country’s design, development and production capabilities where SSBNs are concerned: India is completely self-sufficient in propulsion systems, control technology, and most of the assemblies in the boat. What will continue to be imported for the foreseeable future are diesel engines for support functions, motors, the optronic head of the mast, and a communications sub-system. L&T, moreover, has a 3-D fully digitalised submarine design facility that is as technologically advanced as any in the world, and can convert a ‘basic’ design into a production-ready engineering design.

It would have been commonsensical, under these circumstances, for the conventional diesel submarine project to be also assigned to L&T, which has the requisite production experience, design-development wherewithal, and excess manufacturing capacity. It would be in line with the trend to consolidate national resources in single submarine design-cum-production units, like Kockums in Sweden, the Vickers-Barrow combine in the UK, and the Rubin Bureau-Severodvinsk complex in Russia.

The previous Defence Minister Manohar Parrikar, keeping in mind economies of scale and a viable indigenous industry, surveyed the existing capabilities in the country, analysed the cost advantages, and concluded that L&T would spearhead the Project 75i. A combined L&T-Defence Ministry team was then to negotiate the purchase of just the design of an advanced conventional submarine from interested suppliers along with the few select technologies the country is still deficient in. The German firm, Thyssen-Krupp, with its HDW-series of submarines—the HDW 209 submarine bought in the 1980s is still in service and a darling of the Navy—was identified as a firm that could be induced to sell the design of its HDW-214 boat. This was an imaginative tweaking of the foreign ‘strategic partner’ concept central to the Defence Procurement Procedure, 2016.

Once Parrikar departed, Arun Jaitley, reassuming concurrent charge as Defence Minister, reverted to global tendering and the lowest tender (L-1) process. This tendency will be reinforced by the current Defence Minister Nirmala Sitharaman’s declaration at the 2018 Defence Expo in Chennai that the armed services can’t be compelled to buy Indian.

What L1 also means is that there will be no scrutiny of the technical capacity and capability of the Indian companies bidding for the contract, and permit a company with no experience in building submarines. The lowest bidder will become hostage to the interests of the foreign submarine supplier who will decide what technologies to pass on, including those that India already has, and what to sell as ‘black boxes’ for the duration of the production run, as has happened with all defence Transfer-of-Technology deals to date. So the 75i boat will have 100 per cent foreign-sourced content because the supplier knows the bid-winner has zero assets, zero production experience, and untested specialised manufacturing capacity.

India and the Indian military will remain foreign dependencies, national wealth will continue to be drained to enrich foreign defence industries, and the empowered supplier countries, holding all the high cards, will ensure that indigenous capabilities are scuppered and India’s national security compromised. The newly founded Defence Planning Committee, under the National Security Adviser Ajit Doval can, in theory, insist on the Parrikar prescription as the defence procurement template but, the odds are, it won’t.

The waste of public monies may be gauged by the fact that the design of the HDW-214 (or the Russian ‘Amur’ or the French ‘Barracuda’) equipped with air independent propulsion system can be bought for some $500 million or Rs 3,200 crore, which along with the cost of the one-off buys of only select technologies will mean a total hard currency outgo not exceeding Rs 8,000 crore. Except, a nearly ten times bigger sum of Rs 70,000 crore is already allotted Project 75i, most of which will enrich the foreign vendor.

Consider also that the Scorpenes of the Navy’s Project 75 were seriously compromised as a fighting platform in August 2016 when 22,000 documents relating to the stealth, ‘signature’, and other critical aspects of this boat were published by an Australian newspaper. This leak was attributed to a disgruntled employee of DCNS Naval Group, the Scorpene supplier. But the Indian Navy and Government, risk-tolerant when it comes to deals amounting to humungous amounts of hard currency, shrugged it off, not even penalising or blacklisting DCNS, and requiring it to redesign and change the basic characteristics of this vessel at the French company’s cost. So instead of one or two submarines of this type being an operational liability, all six Scorpenes will be. So, India’s sea-denial force will be anything but.

This was possibly the result of 2 to 3 per cent of the total Scorpene contract, as is usual in the arms business, being earmarked as the ‘commission’ component for parcelling out to various vested interests and facilitators within the country. One can see why defence acquisition decisions can be so easily engineered even and specifically at the expense of achieving arms self-sufficiency. It is a process foreign arms suppliers have turned into a fine art and roaring business.