Death of the Hero

And the virtues of collective action 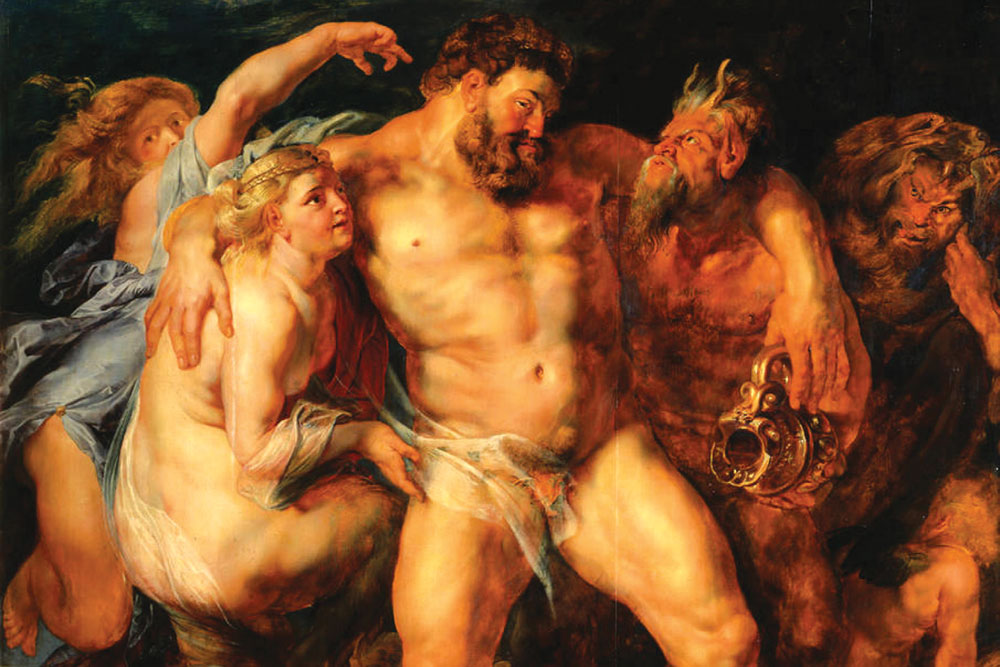 
A MAN SEEPED IN drink teeters and totters on his way. Unable to stand straight he leans back raising one heavy foot after another. The excesses of food and drink have started to fold over and threaten to eclipse his six-pack abs. Incapacitated, he rests his heaving bulk on a satyr and satyress. A second satyr plays with a lion’s skin, while a fair-haired male cherub rushes off with a club. This is Hercules. But this is The Drunken Hercules (1612-1614) painted by Flemish artist Paul Rubens. It is a painting that invites our laughter and our pity, here is a divine Roman hero, who has been reduced to just another drunken slob. He who wrestled with the Nemean lion, and donned in his lion skin defeated the Hydra simply with his club, cannot even walk straight. On his shoulders rests the state’s eventual defeat or victory, and now, he must be propped up like an infant learning to walk. The drunken Hercules is an enfeebled Hercules, his most powerful weapon, his club, becomes the plaything of a child.

Rubens’ painting wonderfully exposes the fragility of our construction of heroism. We create heroes to tell ourselves stories, and when we need succour in an alien or hostile world. If in antiquity we had Achilles and Hercules, today the same devotion of the state plays out for the Kohlis and the Modis and the Shah Rukh Khans. But to believe in the cult of the lone man, to hero worship, is to set oneself up for certain disappointment.

Our understanding of heroism still hinges on that of the Hellenic hero, he who embodies individuality, self-determination, and physical courage that prevails over all odds. The Hellenic hero is of immense physical strength, superior to all compatriots. You can see him onscreen in Hollywood and Bollywood, you can see him in Parliament, in the Vladimir Putins. Popular culture and political narratives build up scenarios of doom and gloom as a way of introducing, justifying, and winning our support for the hero. A hero needs everything to be a mess so that he can come to the rescue. In fairy tales it is the princess who must be protected, in today’s politics the state must be saved from alleged internal and external enemies. If there is no perceived foe, the hero will be unemployed and on dole.

A hero can be a hero only when created in opposition to another, it needs to be Man Versus Wild. To be a hero, is to set up binaries of victory and defeat, it cannot be Man With Wild. To cooperate, to coexist is seen as compromise, and as disempowering.

As the political axis of the globe turns towards the right, the Hellenic hero is edging out the Biblical hero. A figure like Christ or Gandhi were distinguished by their moral courage and sacrifice, not by their physical prowess. ‘The Hellene obtains glory through defiance; the Biblical hero obtains glory through submission,’ writes William R. Herman, in Heroism and Paradise Lost (1959). In politics today we can see these same rifts, we have the culture of defiance, and a culture of compliance. There are those who will bully their legislation through, and there are those who will choose to listen. Today, if we are seeing the valorisation of a Nathuram Godse (even if it is a fringe element) it is because physical prowess has come to trump moral fortitude.

The danger lies not only in the elevation of the Hellenic hero, but in the idea of heroism itself, as it raises the one over the many. By its very nature, to be a hero is to be one above others, it is to be a captain, not a team player. It is to dismiss the work of the collective, those in the wings, those in the kitchen, those in the lab, and to crown only the man on the stage, the man striding up front.

Whether it is in art or science or politics, the hero has always been considered male, toiling in solitary isolation, relegating women to witnesses or helpers. The rhetoric around heroism plays a role in the historic marginalisation of women and their work. Raising children, tending for one’s family, are seen as quotidian pursuits. In ‘Objectivity or Heroism? On the Invisibility of Women in Science,’ (published in The History of Science Society, 1996) Naomi Oreskes writes, ‘The imagery and rhetoric of expeditionary heroism in the field sciences has camouflaged women’s contributions, by reinforcing an image associated with physicality, when in fact physicality often had nothing to do with the actual scientific work, and by relegating their contributions to the realm of the mundane, in spite of the reality that field work was commonly characterized more by boredom than excitement.’

The manufacture of heroes not only marginalises women, but also those who are simply not in the business of tooting their own horn, and those who are okay being cogs in the wheel. In Invisibles: The Power of Anonymous Work in an Age of Relentless Self-Promotion (2014), David Zweig celebrates the toil of those he calls the Invisibles. As a former factchecker at a magazine, he chooses to examine those who get a quiet inner satisfaction from work, without the public oos and aahs. In his interviews with Invisibles, (for example ghost writers or anesthesiologists), he identifies their ambivalence towards recognition, and notices that many of these Invisibles choose to talk in the collective ‘we’ and not the singular ‘I’. They do not spend their breath in creating their own parables, their passion lies with the bigger narrative.


I have walked in protest rallies recently in the capital. For me, these protests are significant not only for the causes they expose but for the fact that they are in the real essence-headless. No single person leads from the front

Zweig writes in the Harvard Business Review (May 2014), ‘Invisibles show us that power and visibility are not always aligned. We might think that the person at the top of the pyramid, the front of the stage, or the head of the boardroom table is the one with all the responsibility, but it’s often someone unknown to the public who bears much of the weight.’ The heroes of today are more often than not showboats, they feed off the public’s attention, there is no place for modesty, let alone acknowledging the work of others.

But in 2019, we’ve seen telling examples of the power of the unknown many. I have walked in protest rallies recently in the capital. For me, these protests are significant not only for the causes they espouse but for the fact that they are in the real essence—headless. No single person leads from the front, no one is looking to a chief for their cues (at least not in the ones I attended). Instead, like a stream of water it follows the contours, while also making its own path. If it finds a khaki dam ahead it simply changes course. Other tributaries join along the way, the trickle becomes a swell. The stream does not know its course from the start, rather it makes its own way and meanders towards an estuary where it can empty itself. The movement, the growth, the ebb and flow of the people appears organic. The rallies are devoid of the hierarchy of a stage and mike, which naturally separate people into the single speaker and the many listeners. At the protest no one is looking up in front for guidance, instead everyone tries to follow their best instinct. Sure, the odd person picks up a blow horn, or beats a drum, or sings out lines, which others will repeat, but through it all no one is seeking out the brightest star to orbit.

In the absence of an obvious leader anyone can be everything. The best part of the protests is the hero-making of laypeople. Students in libraries, adolescents with backpacks, mothers with children—this is a protest of all. Even without being too sentimental, it seems like a purity of purpose has brought them to the streets. They’ve come out of their homes to tell us that something is rotten and they are not okay with it.

The protest is the most potent symbol of the power of the many. The defining images of 2019 would have to be the transformation of roads of honking traffic into arteries of throbbing people; whether it is the masked men and women of Hong Kong who are like the Gladiators of Protest, or the women in Santiago who are the Antigones of Protest. In Hong Kong, the protestors who have honed their skills over months of facing a hostile state in the streets come equipped with their own devices and processes of defence and offence. In Santiago, the women dressed in black and blindfolded make a case against patriarchy with their spoken poem ‘A Rapist in Your Path’. To a rhythmic and infectious beat, thousands of women in the Chilean capital chant what has now become their rallying cry: “El violador eres tú (The rapist is you).”

In all of these we see the absence of a titular head. Sure, there might be a Greta Thunberg who has inspired people to leave their armchairs and benches, but these marches are not about a flock following a shepherd. The sweep and spread of peaceful protests across the globe tells us we do not need heroes, we need the Invisibles. We do not need the hubris of the single, we need the collective wisdom of the many. Heroes will inevitably let us down, because we imagine them to be completely untarnished and wholly unafraid, and no one can be that.

We are surprised when our favourite actors do not voice our opinions, or worse, when they say nothing at all. We throw our arms up in despair when our leading sportsmen let out nary a squeak in support of our causes. And we declare defeat when we see that people we might have admired parrot a tweet of a stooge, which gives itself away with the lack of apostrophes and hyphens. Our heroes will let us down, because that is the nature of heroism, and the offshoot of mythmaking.

THE METOO movement sent out ripples because it brought heroes down. The carapace of heroes (whether it is a Weinstein or an Epstein) strew the landscape of the last two years. These were once men of influence and repute, who finally proved to be no better than the unzipped pervert in the gully. The bringing down of heroes is always a messy business. And as the MeToo movement has shown it is best done by the power of many.

Today’s Drunken Hercules could perhaps be seen in a figure like Aung San Suu Kyi, as drunk on power, she has had the most vertiginous fall from global icon to fallen hero. A recent Economist headline read, ‘Aung San Suu Kyi has gone from hero to villain,’ the strap added, ‘Yet she has not changed very much’. In 1991 she won the prize for the most heroic of them all—the Nobel Peace Prize. Earlier this month cries of ‘Shame on you,’ followed her motorcade to the International Court of Justice in The Hague, which was hearing a genocide case against Myanmar. How can the same person transform from ‘an important symbol in the struggle against oppression’ to an accused in a genocide? Her downfall shows that there can be no heroes (irrespective of gender), there are only humans floundering between good and bad. Bertolt Brecht’s Galileo in the play Life of Galileo (1939), says it best, ‘Unhappy the land that is in need of heroes.’