Viyyur Central Prison in Kerala starts a television channel of its own, by the inmates for inmates 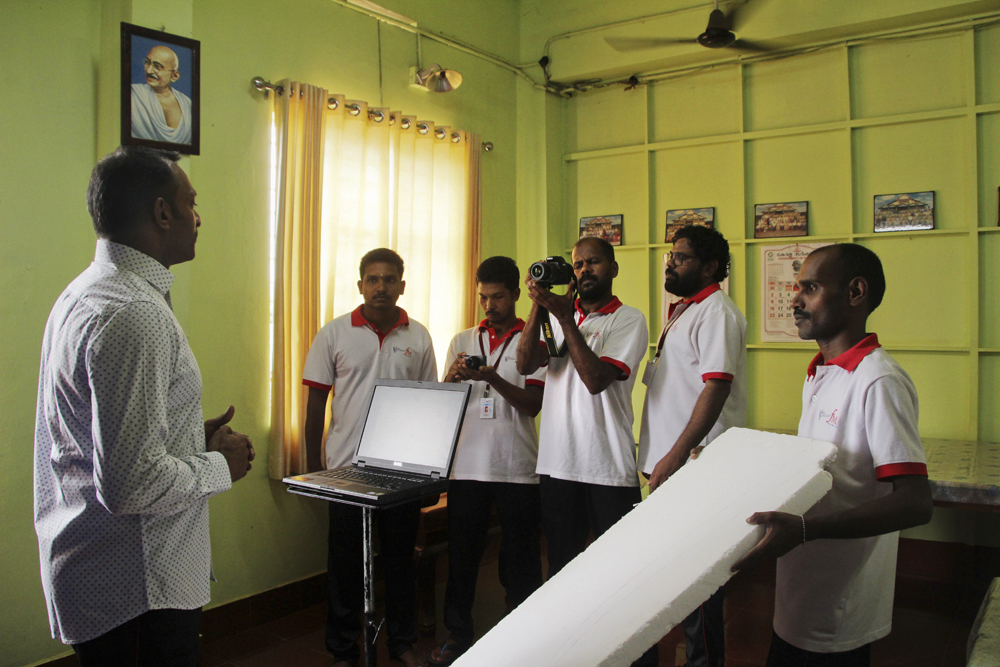 Jail doesn’t necessarily mean an end to a career in visual media if one is an inmate of Central Prison, Viyyur in Kerala. Known for pioneering unique in-house products under the brand ‘Freedom’—Freedom Chapatti, Freedom Radio and even Freedom Melody, a music band—they have now launched a a channel of its own. Called Freedom TV, its fare includes prime time news bulletin, a music show, comedy programmes, educational programmes on jail rules and talk shows on law related matters, all anchored, shot and edited by inmates.

They have taken a tip or two from mainstream media. The prime time anchor follows the same style, voice modulation and earnestness in his presentation that is typical of Malayalam channels. A life convict, it is uncertain when the anchor would be able to experience the real taste of freedom. He was convicted for murdering his wife and has already spent 13 years in jail. Now completely occupied with the Channel, he is busy visualizing every week’s programmes, shooting and meeting deadlines. The journalists visiting the jail are supposed to talk in camera, giving an opinion or wishing the ‘television crew’ the very best for their flourishing channel. All such bytes would be included in the next news bulletin. Interestingly, all the crew members- Producer, Editor, Cameraman, Production Assistant—are life convicts for murder.

“The inmates had a radio station long back. They used to present programmes for the radio. The idea of a television channel came up after a short term vocational training course in videography and visual editing was conducted in the jail. More than 20 inmates expressed active interest for those courses,” says Nirmalanandan Nair, Superintendent, Central Prison, Viyyur. “Society has a wrong perception about a prisoner. Everyone here is not a dreaded criminal. Eighty per cent of them committed offences without any predetermination. Circumstances made them do the crime, the remaining 20 are habitual offenders. All our reformation activities target the majority who are not habitual offenders.”

The channel is being telecast two days a week, Wednesday and Friday. In the prime time bulletin, main stories include the events in the jail, VIP visits, the launching of welfare programmes in addition to happenings in the world outside. “We prepare news scripts based on the information we get from the newspapers and television channels,” says the editor, another life convict. Exposure to the visual media is not new to him. He was an ad filmmaker and has done couple of short films too. He was convicted for the murder of his first wide and has been in this jail for only 20 days. His life in prison has just begun and there is long way to go. “I really enjoy doing this. I had a passion for news and other programmes,” says Freedom TV’s prime time anchor. He was a businessman earlier and hopes to some venture related to the visual media once released.

Sweet Songs and Super Five are the two other programmes popular among the inmates. Both are compilations of film songs and scenes with an anchor bit. The officers provide them the collection of songs and downloaded movie scenes. “It is presented as a programme on demand from the inmates. We select songs and movie scenes as per their requests,” says the anchor. Then thete Vox Populi, also hosyed by the news anchor himself. It is a chit chat with inmates including pranks, riddles and jokes. Law Corner is a show in an interview format. Either the Superintendent jail or someone else in his capacity gives answers to questions by the anchor on prison rules and practices. Doubts raised by inmates regarding jail rules are being clarified in this show. Another law based show being planned is Thoughts on Justice, anchored by an ex-police officer who is now a life convict. It is an informative programme in which he provides lessons on Indian Penal Code, Criminal Procedure Code and the Constitution. This programme is yet to be approved by the Superintendent. “We have to thoroughly verify such programmes with serious content, especially he being a life convict in a sensational murder case,” says Nair.

It had been a gruesome murder. On Februaty 15 2005, a 20-old-man Praveen, a native of Kottayam, did not return home. Later he was found murdered, his body chopped, wrapped in plastic covers and dropped in various locations. He was said to be in an illicit relationship with the wife of the then Deputy Superintendent of Police. The brutality of the murder made it hit headlines for months. In December 2009, the police officer, by then retired, was convicted for life and thus ended up in Viyyur. He has been an active participant in recreational and vocational activities in jail.

In Viyyur, besides videography and editing, there are a number of other vocational training courses like advanced diplomas in Optical Fiber Technician and Digital Security Surveillance, professional certificate courses in Industrial Fire and Safety and Automotive Upholstery. Inmates are also given training in carpentry, furniture manufacturing, electrical work and plumbing. “Our intention is to make them equipped to live an independent life outside even if the family is unwilling to accept them,” says OJ Thomas, the welfare officer of Viyyur Central Prison. Prison statistics indicate that recidivism is relatively low in Kerala. “As we told you, since majority are not dreaded criminals or habitual offenders they never come back. Those who keep retunring are mostly related to offences like theft and robbery,” says Thomas.

“The reformation programmes in Kerala’s jails make a tangible impact,” says Jacob Punnoose, former DGP of Kerala. “Jailed population is very low here compared to other states. There is a huge gap between the number of cases registered and people put in jail which shows the existence of an effectively functioning law and order system.” Punnoose, who was also the Special Rapporteur with the National Human Rights Commission, has been a team member for a study on jail reforms in Kerala. The average number of inmates in Kerala’s prisons never crosses 10000. According to him this is remarkably low compared to the total population and the number of crimes being registered. “An average number of 5.5 lakh crimes are being registered every year in Kerala, but people languishing in jail and unnecessarily being kept behind the bars for a longer period is not that common in our state. Jail is the exception and bail is the rule,” he adds. Kerala has a fairly good track record of releasing undertrials without inordinate delay. According to the prison statistics provided by NCRB, 63 per cent of them are being released before three months. However, Kerala jails are not free from overcrowding because capacity has not been enhanced for a couple of decades. “The total capacity is 6000 and now we have 8000 prisoners altogether,” says Sunil Kumar, the welfare officer of Pujappura Central Prison at Thiruvananthapuram.

Punnoose observes that vocational training and recreation activities in jails have been a major factor in keeping recidivism low. Jail reforms focusing on skill development and occupational training started ten years ago. The biriyani and chapatti made in Kerala jails have huge demand. “Last year we had a turnover of Rs 4,32,00,000 and a net profit of Rs 71 lakhs,” says Nirmalanandan Nair. Half of this amount is spent for welfare activities in jail. According to prison statistics of 2016, Kerala reported the highest expenditure on welfare activities for prison inmates. This included food, clothing, medical expenses, vocational training and recreation. Organic farming has also been successfully established in Viyyur jail which has a land area of 130 acres. “The inmates made a significant contribution to last year’s flood relief. They prepared and distributed food in relief camps and also contributed four lakhs to chief minister’s relief fund,” he says..

Kannur central jail which is home for many VIP prisoners of political conflicts has also been successfully running a wide variety of vocational activities. A beauty parlour for men named ‘Freedom Expression’ is the latest such venture. Inmates are given training in beauty treatment and established the parlour which is open to the public. Authorities were skeptical about whether the common public would access the service but the venture has become a great success. “It is interesting to see that common people trust prisoners convicted for murder and other gruesome crimes to let them do haircut and beauty treatments,” says Punnoose. Poojappura central prison at Thiruvananthapuram has a boutique from where the public can buy trendy clothes stitched by inmates. According to the latest prison statistics of NCRB Kerala ranks third in the country after Tamil Nadu and Delhi in terms of sale value of commercial products. Tamil Nadu and Kerala are states having the highest value of goods produced per inmate.

Yeshudas, a native of Puthukottai district in Tamil Nadu, spent almost 11 years in Viyyur central prison and after being released a few months back, makes a living by manufacturing soap and detergent. He used to be a habitual offender always returning to jail for theft. He then learnt soap and detergent making inside. “I now make and sell it in my village,” he says over phone. There are many such success stories but there are also shortcomings. Though the prisoners are taught skill development and vocational training, they do not have the means to start self employment on their own. “So far there are no schemes to provide financial support to the prisoners to help them begin a new life once they are released,” says Punnoose.

Meanwhile, the team of Freedom Melody in Viyyur jail is all set to start the round up bulletin. The prime time anchor is busy collecting the latest information on the success story of Kerala’s battle against the Nipah virus. An additional piece of news on the day is the visit of the Open magazine team. Freedom Melody conducts cultural programmes among inmates. There is dance, music, mimicry, mono act and storytelling. A 25-year-old migrant from West Bengal serving life imprisonment for murder is the assistant cameraman. A CPM cadre convicted for a political murder is also part of Freedom Melody.

All the programmes require two tier approval—first by the Assistant Superintendent and then the Superintendent. “I have to find additional time to see all the recorded tapes and verify, but I am happy to do it,” says Nair.

“When I was approached to contest elections, I had only one condition. I would not give up the role of ASHA”