Under-19 World Cup: Wall of Fame 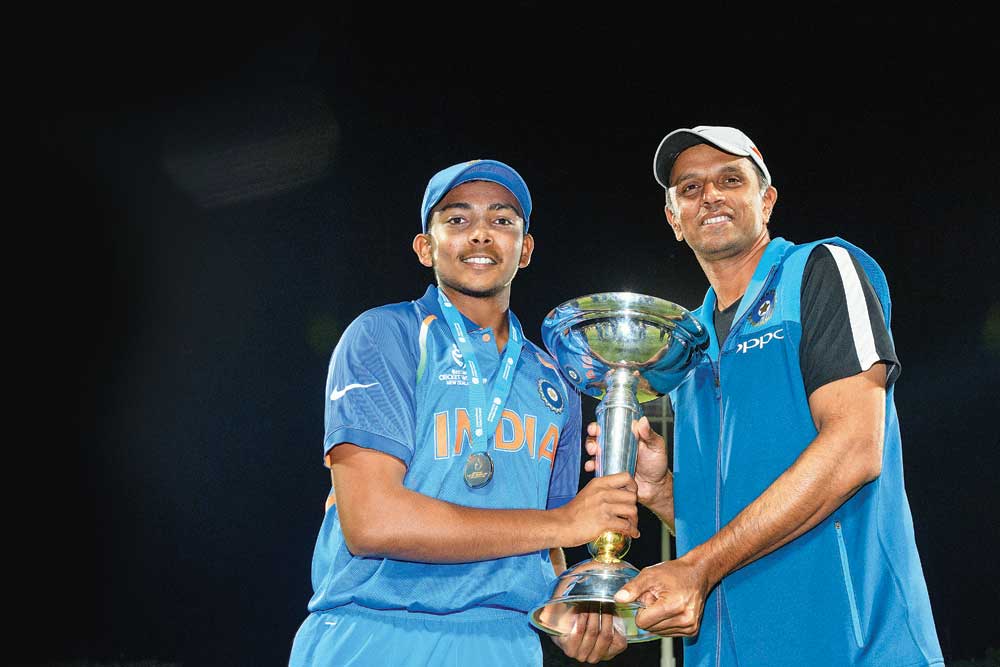 ON FEBRUARY 2ND, the eve of the Under-19 World Cup final in New Zealand, the Indian team’s think-tank—headed by coach Rahul Dravid—decided to break routine and not discuss strategies during their pre- match meeting. Instead, Dravid dimmed the lights in the conference room, turned on the projector and displayed a series of pictures and videos that summed up the team’s journey; from the first time they united at the National Cricket Academy in Bangalore late in 2016 to the night before the World Cup final in Mount Maunganui, New Zealand.

For the duration of the 20-minute presentation, the players, led by captain Prithvi Shaw, chuckled, praised, appreciated and soaked in all the memories that included everything from their petrified faces during team-bonding activities to their dazzling on- field performances. The purpose of this exercise was to simply keep the positive mindset afloat and to address any anxiousness ahead of the biggest cricket match of their young, teenage lives.

Twenty-four hours later, India thrashed Australia by eight wickets to lift the U-19 World Cup for the fourth occasion. No wonder, then, that every member of India’s victorious team, when quizzed about their trophy, is quick to highlight that the triumph was achieved not over three weeks but over a campaign that lasted two years.

The 2018 victory was by far the most dominant by any team since the inauguration of the U-19 World Cup, all the way back in 1988. During this tournament, India’s narrowest margin of victory was 100 runs, or eight wickets—depending on how one approaches it. Either way, it told a tale of a team that looked determined to be the best from the minute they touched down in New Zealand at the beginning of the year.

The results will indicate that the World Cup was a stroll in the park, but that is largely due to the fact that the seeds to success had been planted with Dravid’s appointment as coach of India’s U-19 team three months before the 2016 U-19 World Cup in Bangladesh, a tournament which India lost in the final.

“At my last World Cup campaign in 2016, I didn’t have time… I had only seen 15-16 boys,” Dravid said a day after the tournament ended. “So, this time around I wanted to put in a process where I was able to see more players, provide them with different opportunities, give them the experience of what it was like to play for an Under-19 team and generate a pool of 30 players capable of playing at that level.”

Among the first steps taken, Dravid ensured the support staff from the previous World Cup was kept intact and then started with a clean sheet by assembling a squad capable of winning the title in two years time. From a coaching perspective it was a new challenge. In many ways, this generation of players symbolised modern India. These boys had the tendency to be slightly brash and spent a majority of their free time on social media. They were also addicted to their smartphones and it would be fair to say that their attention spans were probably shorter than anyone the star-turned-coach would have encountered during his career as a cricketer.

Aryan Juyal, the back-up wicketkeeper in the squad, summed up Dravid’s role in the side best when he said: “We could be mischievous and play a prank or too, but at the same time we would also be aware that we would get a tap on the shoulder if we stepped out of line. The fact that Rahul sir gave us flexibility and didn’t set absolute rules were what we respected enormously.”

Over time, Dravid and his support staff had built a rapport with the boys that created a vivacious and enthusiastic dressing room culture. Nothing captured this environment and their comfort level with their superstar coach better than during Dravid’s birthday, a few days before the tournament was to begin. Not a single player hesitated for a moment to smear cake over the 45- year old legend’s face and also post the series of selfies across social media. Off-field, they had cultivated the culture of a happy family. This was soon going to reflect in their on-field performances as well.

In the opening match, India annihilated Australia by 100 runs. It gave a glimpse of India’s ruthless attitude and all-round skill set

In the opening match of the tournament, India annihilated Australia by 100 runs. It was a match that gave a glimpse of India’s ruthless attitude and all-round skill set. Shaw, India’s captain and a child prodigy earmarked for greatness, set the tone with a knock of 90 runs, during which his stroke-play drew comparisons with the great Sachin Tendulkar. The fast bowlers weren’t far behind either. “Salivating,” was how former West Indies fast bowler Ian Bishop described India’s Kamlesh Nagarkoti and Shivam Mavi on first sight. Their ability to bowl in excess of 140 kmph on a constant basis, along with their rhythmical run-ups and high arm actions, turned more than just Bishop’s head.

Former Australian captain Steve Waugh, who was present at the ground to watch his son Austin (playing for Australia Under-19), later told his former team- mate Tom Moody, a commentator for the World Cup, that the Indian team showed no signs of anxiousness – a strong sign of a tight knit unit that had played together for a long time. And for that, Dravid and his vision will once again have to be mentioned.

Not content with relying on his players’ talent, Dravid ensured that in the 12 months leading up to the World Cup the squad got as much match practice as they could. India played two bilateral series against England, home and away, and also participated in the Asia Cup. Then, Dravid put in an official request to reach New Zealand (in Napier) nearly three weeks prior to the first game so Shaw & Co could acclimatise to the conditions by playing three matches against a local team (Central Districts A). The request was granted, of course.

Given their talent and form, India would barely raise a sweat in the next two pool matches as they trounced Papua New Guinea and Zimbabwe. In the latter contest, Shubman Gill was allowed to open the innings during the chase and fans of Indian cricket first lay their eyes on the emerging batting luminary. Gill, who smacked an unbeaten 90 in just 59 balls, was far less explosive off the field. Prone to addressing questioners in press conferences with ‘sir’ or ‘madam’ and seldom speaking unless spoken to, Gill was painted as a ‘shy boy’ by the media. ‘Not true’, revealed Shaw later.

“Gill is the most mischievous guy in the team,” the captain said. “He makes everyone laugh and cannot stop pulling everyone’s leg in the dressing room.” Gill might have fooled the onlookers on the tour about his character, but there was little doubt about his aptitude and dedication. The number three batsman showcased his resolve, technique and class by scoring his third fifty on the trot, a superbly constructed 86 during their win over Bangladesh in the quarterfinals.

THERE’S A BACKSTORY to this game. Six months ago, Bangladesh had knocked this Indian side out of the Asia Cup, a game in which tempers had flared and words were exchanged. This history apparently made Dravid nervous, and he is said to have spent a sleepless night before the match. But his boys were relaxed enough to win the game by 131 runs. At this point, their collective focus should’ve turned to Pakistan, who they were to meet in the semifinals. Instead, it was on a far greater distraction.

Two days before India’s semifinal game against Pakistan, the IPL auction was held in India, with many boys from this team on the bidding roster. Dealing with his players’ non-cricketing anxieties pushed Dravid into uncharted territory. “It was going to be a distraction and I could have ignored it, but instead we decided to address it and confront it as a group,” he told reporters later.

Shaw said that Dravid told the team that while it was natural for them to be engrossed in the IPL auction, it was also important that they bear in mind the arduous path each of them had taken over the past two years to achieve the ultimate goal of reaching thus far in the World Cup.

Seven players would get selected in the auction, three of them (Gill, Shaw and Mavi) fetching over Rs 1 crore while Nagarkoti would end up being brought by the Kolkata Knigh Riders for Rs 3.2 crore. But a day later, on the eve of the match against Pakistan, Dravid immediately recognised that the players had stuck to their promises of concentrating on the task at hand.

India would go on to decimate their arch-rivals by 203 runs in their penultimate match. Gill’s masterful century (102 not out) and fast bowler Ishan Porel’s superb opening spell of 6-2-17-4 were the main talking points of yet another polished performance. The conviction in these wins had already led to plenty of hype, fanfare and publicity, not just in India, but across New Zealand as well. On the day of the final, thousands of fans drove down from Auckland to Mount Maunganui, painting the small ground blue.

Chasing a modest total of 216 set by the Australians, Manjot Kalra hit a riveting century and ensured India won with eight wickets and 67 balls to spare. And the moment middle-order batsman Harvik Desai smacked the winning runs, a gruelling two-year journey had concluded in the most emphatic manner. With the trophy secured under his arm, Dravid took his team on one final journey to the middle of the field. As they forged a team huddle, with gold medallions hanging around their necks, Dravid asked his players to cherish these memories forever, but continue to aim higher.

On arrival in India, where the team was mobbed by thousands at the airport in Mumbai, Dravid was constantly asked questions regarding the future of the players. While he was all praise for their talent, Dravid was quick to state that winning the U-19 does not guarantee success at the senior level and referred to the winners of the 2012 edition as a cautionary tale. “The result of the 2012 final will tell you India beat Australia (Unmukt Chand’s side won by six wickets),” Dravid said. “But six years down the line only one of the boys has gone on to play for India, in a couple of matches, while four or five of the Australians have gone on to play for their country.”

The captain of the 2012 World Cup team, Delhi-boy Chand, was widely considered to be the next Virat Kohli, mainly because Kohli too won the U19 World Cup as captain in 2008. But while Kohli went on to immediately make the transition to international cricket, Chand stagnated— yet to win his senior India cap at 24. It was perhaps with Chand in mind that Dravid told the reporters: “Hopefully this is not the memory that defines them (the batch of 2018). And hopefully these boys will have bigger and better memories as they get ahead in their careers.”