The Reign of Kitchen Kings

Why online grocery shopping is thriving 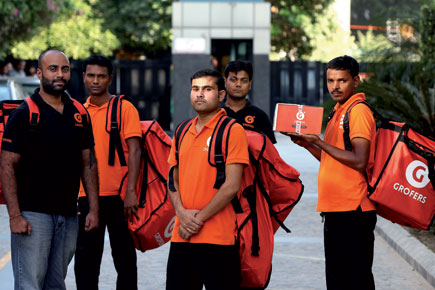 For 34-year-old Harneet Sodhi, an infotech professional living with her husband in an upscale high-rise along Golf Course Road in Gurgaon, ‘doing grocery’ was never any fun. The weekend chore of taking out the car and scurrying through crowded lines in the local supermarket for the week’s groceries was always done with routine rounds of bickering, frowns and procrastination. One of the pitfalls of living in the locality, as with many other such apartment complexes in Gurgaon, was the absence of a friendly neighbourhood convenience store. “But I have now started ordering online through an app on my phone,” Sodhi says, “One gets good combo deals which work out cheaper. Besides, my orders get delivered at my time and convenience.”

With over a dozen online grocery portals working within the National Capital Region, Sodhi now spends most of her grocery shopping time browsing for the best deals available. “Since there is severe competition to grab customer attention, most of them offer great discounts. Whenever I need something, I first check what deals are available, and then place my order with the one offering the best options,” she says. While the discounts range between 2 and 5 per cent, Sodhi, however, still shies away from buying fresh fruits and vegetables online, opting to stick to the custom of buying these from a local vendor. “The only hitch with online shopping is that you cannot physically see what you’re buying,” she says. “While I can easily buy packaged and branded items because I know what they are, I am not sure if the perishable items would be of good quality, particularly if they are available at huge discounts.” A regular online shopper now for most other things, be it clothes or household objects, Sodhi says, “I don’t know how long these online stores will last, but for the time being, it’s the best thing that could happen in the name of convenience.”

Sodhi’s enthusiasm explains the current wave of online stores popping up on our web browsers. Riding on the convenience and rising popularity of internet shopping in India, grocery portals have mushroomed over the past year or so, most of them promising attractive discounts and promotional coupons along with free home-delivery services. Anything and everything is offered to customers just to get them to pull out their smartphones and tap the apps, bypassing the kirana store round the corner or supermarket at the local mall.

While items bought online are delivered within two-hour time slots chosen by the customer, all that customers have to do is download the app, and then tap and swipe into their e-baskets what they want. Customers have the option of paying either online through credit cards or with cash once the items are delivered at their doorstep.

With nearly 40 such portals in operation across the country, it is no longer just a big-city phenomenon. They are also gaining popularity in smaller cities like Visakhapatnam, Ahmedabad, Jaipur and Lucknow. “The main reason for this is that people are getting tech- savvy across the board,” says Navneet Singh, co-founder of Gurgaon-based online portal PepperTap.com.

An alumnus of Indian Institute of Management, Ahmedabad, Singh started the company with Milind Sharma. Singh says he drew on his personal experience of working six days a week and then suffering the tedium of shopping for groceries and other essentials on his Sunday. “We had initially targeted our enterprise at young double-income-no-kids couples in Delhi-NCR, but surprisingly, housewives, whom we would think of as being more interested in venturing out themselves and shopping, are also a major part of our consumer base. At the end of the day, it is convenience and technology that is making the difference,” he says. Launched in November 2014, PepperTap has around 2,000 staff members working on the ground, and processes about 37,000 orders on any given day for cities like Jaipur, Pune, Lucknow, Hyderabad, Kolkata, apart from Delhi and Mumbai.

Other than PepperTap, websites such as Zip.in, FreshToHome.com, AaramShop. com, LocalBanya.com, Omart.in, BigBasket. com, AtMyDoorSteps.com, MyGrahak.in, ZopNow.com and RationHut.com are just a handful of e-stores that have opened of late. Run by journalist-turned-entrepreneur Priya Solomon and her Kochi- based family, FreshToHome.com specialises in delivering fresh sea fish, without any chemical preservatives and long periods of storage. Mumbai-based Grofers, which started out supplying groceries to restaurant chains and delivering medicines home from pharmacies (hence the name), now operates in as many as 27 cities with a ground staff of over 3,000 people.

By the latest data released by the Internet and Mobile Association of India, the online food delivery market saw an impressive 40 per cent growth in 2014 and reached Rs 350 crore by the end of December. According to a survey done by research firm Technopak on the e-retail sector, India’s overall e-tail market is pegged at $7 billion for 2015. Of this, online food and grocery is a tiny and nascent category, though it has witnessed a huge upsurge over the past year. Its potential is huge. “Food and grocery is about 67 per cent of the total [mostly offline] retail market,” says Pragya Singh, vice-president, retail and consumer division, Technopak. “Consumers seeking convenience and a wide range of products are now attracted to online grocery shopping,” she adds, pointing to the limited reach of old-style grocery chains. As smartphone penetration in India deepens, online grocers will be accessible to millions of more shoppers.

A study on online grocery by the US Department of Agriculture earlier this year also forecasts strong growth in India. ‘The availability of multiple payment methodologies such as online banking, credit cards, debit cards, and cash-on-delivery have meant that it is convenient for urban Indian consumers to shop online while saving both time and money,’ the study’s report notes.

With India considered a hotbed for internet startups nowadays, such reports have helped draw an onrush of investments into the sector. Valuations, say experts, are still not too high, and e- tail penetration is still very low, which makes space for expansion for years to come. “It is the ‘now happening’ sector,” adds Pragya. Just as PepperTap was founded by techie consultants Navneet Singh and Milind Sharma, other e-grocery ventures like LocalBanya and Grofers too are startups headed by former corporate professionals. Bangalore-based BigBasket, considered one of the largest e-grocery ventures in India, was set up by VS Sudhakar, who had founded Fabmart. com in 1999. The company, which boasts of 1 million customers and about 15,000 orders a day, began in 2011 with $10 million invested by Ascent Capital and Rs 200 crore by Helion Venture Partners and Aventus Capital.

Perhaps it was the sector’s low entry barriers that inspired Lucknow-based MBA student Aishwarya Jaiswal to start Gharbaithay.com with an initial sum of just Rs 50,000. He launched his venture in June 2015, and claims to service 10 apartments with about 10-12 orders daily within Gomti Nagar in Lucknow. It is a tiny business. Instead of his own website, he operates a ready-to-use website. Jaiswal also takes orders via WhatsApp and then sends off a delivery boy to procure items from a closeby kirana store and has them delivered to the customer. He claims to have generated sales worth Rs 150,000 since June.

With corporate houses like Reliance and Tata eyeing the industry and launching pilot projects in small cities, and e- tail majors like Flipkart and Amazon too planning to jump into the fray, Singh feels that the party is only going to get bigger. Even big retailers like Future Group, which owns Big Bazaar, are planning to go online sometime soon. Big Bazaar plans to give customers the flexibility to buy anywhere, pay anywhere and get things delivered anywhere in India.

Even as the e-grocery business expands furiously in India, the key words currently are ‘sustainability’ and ‘survival’ amid all the competition from other e-grocery ventures (on prices) and from neighbourhood kirana shops (on reliability). Sustainability depends on the capacity to maintain and manage inventories at high quality levels, and to ramp all this up to gain the cost advantages of a larger scale. So while an Aishwarya Jaiswal serving about 10-12 orders a day can function purely as an order executor, e-tailers like BigBasket have to procure items, maintain an inventory and manage storage units. Also, since this is a hyper-local business, the same business works differently in every city. Non-packaged perishable items demand extra attention. Companies like Grofers and PepperTap have tied up with local convenience stores whose stocks show up on their product lists when the consumer logs onto their website through an online app. “The challenge is to maintain a relationship with the kirana vendor and make sure that he maintains the inventory accurately so that we can make deliveries to the customer on time,” says Albinder Dhindsa, co-founder of Gurgaon-based Grofers.com.

Pragya Singh of Technopak says that the biggest challenge is to keep up quality levels in spite of low profit margins and operational glitches. With most ventures spreading operations to several cities rapidly, she apprehends cases of ‘biting more than one can chew’. Since this business is characterised by low margins, it is imperative to scale up fast. However, the risk in growing too fast is that players spread their attention and resources too thin and fail to optimise their operations in one place before moving to the next. “Consumers would not like to compromise on quality, price and even range of products, apart from the convenience of delivery,” says Pragya Singh, “Consistency is the key to survival.”