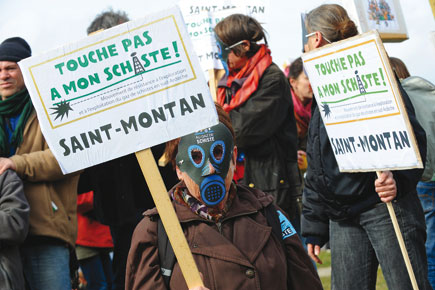 
If Fukushima is deemed to have demonised nuclear energy, France is all set to tar the image of shale gas. It plans to ban its exploration in the country, throttling this energy source even before it gets a chance. Just a year ago, it was busy welcoming investment in shale gas. Since then, a public outcry against hydraulic fracturing, a drilling technique used to extract this gas from under the ground, has changed minds in Paris. It contaminates drinking water, say protestors. Some states in the US and Canada have already imposed bans or moratoriums on fracturing. If France issues a thumbs-down too, it would be a big blow to its future.

“This ban will definitely send a wrong signal to countries like India and China hoping to become self-sufficient in energy from large shale gas prospects in their countries,” says Sudipta Basu, a geoscientist with Reliance Industries Ltd, a company keen on making the most of its potential. With global reserves estimated at 6,600 trillion cubic feet, shale gas holds enormous promise as an alternative to expensive oil and nuclear energy. Also, it could curtail the power of countries like Russia, Qatar and Iran over natural gas prices.

But do these factors outweigh its ecological impact? “No,” says Arvind Mahajan, head, natural resources, KPMG, who believes that the oil industry needs to address concerns about the extraction of shale gas affecting the potability of water. Evidence of its danger is mounting. A Duke University research paper, for example, confirms methane contamination of drinking water in areas undergoing shale gas extraction. Fracturing works by injecting a pressurised mix of water and chemicals into a shaft that goes deep into the ground and then exerts force laterally to crack open shale rocks, thus releasing the gas trapped within. Toxic water from the process, if it reaches groundwater reservoirs, can prove harmful to human and other life. The technique also stands accused of creating seismic disturbances and releasing dangerous quantities of methane into the air.

With elections due and green activists so vocal in France, few politicians would ignore such worries. This means a ban is likely. Oil and gas explorers, however, have not been lazy in their response. Fracturing, they say, is still to be perfected as a technique. Eco-friendly methods are under development as well. According to Basu, “The oil industry is on the verge of a breakthrough that will make fracturing possible with minimal water and chemicals.” If that happens, shale gas could shake up the energy industry.