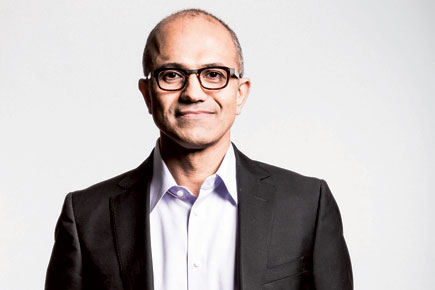 It’s not often that one gets a twinge of sympathy for a monopolist, even one that’s lost its monopoly, but the feeling is hard to escape vis-à-vis Microsoft. Just ahead of the launch of Windows 10, its CEO Satya Nadella has outlined a gameplan for the handheld era, and it has the jury out on whether it’ll save the company that once gave the world its most popular interface between man and machine.

That Microsoft should attract whispers as a ‘has-been’ of the future is ironic in itself. Recall the early 1980s? Back when Bill Gates, its founder, was seen as a villain who’d capitalised on Steve Jobs’ idea of handy little ‘windows’ to be clicked open on computer screens? Microsoft’s Windows was low on originality, but, aided by IBM’s dismissal of Apple as a ‘toy computer’, it found itself installed on millions of PCs and PC clones made by rival desktop makers, and then, once a war for market share sent PC prices crashing, on virtually every screen in sight by the turn of the millennium.

Ah, but that was then. Almost every screen one now sees is held in someone’s hand. Microsoft’s game has been stolen by Google, whose Android for handheld devices has earned itself the distinction of being this era’s most popular interface (again, its ease-of-use drawn from Apple’s iPhone) between woman/man and machine.

If that isn’t Microsoft’s bugbear, nothing is. It’s a fight for who offers a gateway to the latest wonders of technology, and the $87 billion software major is faring rather badly here. More than one year since its $7.2 billion purchase of Nokia’s mobile phone division, it has but a 3 per cent sliver of the global market for handsets, something that mustn’t be easy for a company of its heft to come to terms with. The recent news that it would lay off 7,200 workers was hardly a surprise. But even no news has been bad news for it. In the ongoing frenzy of apps being developed for all sorts of stuff, today’s software whizkids are aiming for Apple and Android phones, not Microsoft. And therein lies the rub. Without an avalanche of apps in its favour, it would be staring at doom.

Microsoft is not in denial. Addressing top executives and thousands of partners at a conference in Orlando on 13 July, Nadella announced a triple-point action plan. For one, he declared, Windows 10 is versatile enough to operate on every kind of device: for “one unifying experience”, as he put it. For another, the company has some clever software up its sleeve to enhance efficiency in new ways, a play for tech-savvy usage at the market’s upper end. On top of it all, it aims to set up a ‘smart cloud’, presumably with enough memory space and processor power to wirelessly enable heavy-duty applications.

Nadella’s broad strategy for the market out there, though, is to make the most of a billion lap/desktops by loading the Start Menu of Windows 10 with attractive apps that work on handsets too. This, in turn, is expected to attract a stampede of app makers. “The fundamental truth for developers is that they will build if there are users,” the CEO said in an interview with ZDNet, “And in our case, the truth is that we have users on desktop.”

To see this chain of events happen, users of earlier versions of Windows are to be offered a free upgrade of the latest one. “Universal Windows apps are going to be written because you want to have those apps used on the desktop,” in Nadella’s words, “The reason why anybody would want to write universal apps is not because of our 3 per cent share in phones. It’s because a billion consumers are going to have a Start Menu which is going to have your app. You start the journey there and take them to multiple places. Your app can go to the phone….”

Whether it works or not, it sure looks like Microsoft’s best way out of a desktop trap. Direct appeals to handset users haven’t got the company too far; even BlackBerry loyalists, the kind who worry about data security more than selfie ability, are scarcely conscious of Microsoft as an option. But then, the handset need not be the be-all and end-all of the story. Nadella’s quest is for “the next bend in the curve”: “One big mistake we made in our past was to think of the PC as the hub for everything for all time to come. And today, of course, the high-volume device is the six-inch phone. But to think that that’s what the future is for all time to come… is madness.”

For now, Satya Nadella seems to be betting the company on software that’s free of hardware form. This makes sense. Beyond that, well, there is really no truth anybody could claim to know, is there?