Believe it or not, entrepreneur Vibhu Natarajan exports palm trees to West Asia. Because gardens need to be grown overnight. 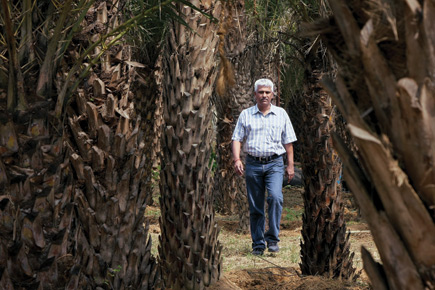 Believe it or not, Vibhu Natarajan exports palm trees to West Asia. Because gardens need to be grown overnight.


The next time you spot a row of stately palm trees at Delhi Airport or at Hong Kong’s Disneyland, and want to compliment the landscape artist, think of Chennai. Chances are that these trees were shipped to these places all the way from Chennai and transplanted. Little is known about this emerging outdoor plant and tree business in the landscape segment, which at a conservative estimate is worth Rs 200 crore in the domestic market and earns an equal amount from exports.

There are very few cultivators who grow, nourish and replant palm trees, as the trees’ mortality rate is often higher than expected profits. “It’s a very delicate thing to do. This is a business where lots of time and patience is required,” says Vibhu Natarajan, a tree entrepreneur whose farm grows 60 varieties of palms, mostly for exports but also a growing domestic market. Most palm trees on his 20-acre farm at Nathanallur, 58 km from Chennai, grow at a rate of six inches a year.

At Vimanaa Landscapes, he grows palm trees, bottle trees, ornamental trees and shrubs that provide a touch of colour to an otherwise barren landscape being overrun by industrialisation. Many of the varieties here are from Madagascar, Australia, West Indies as well as parts of South America and Europe.

While Europe and the Middle East are in recession, the domestic market has grown handsomely over the last two years, says Natarajan. Among his customers are Marriott, Novotel, Microsoft, Baba Ramdev’s ashram in Haridwar and the airports at Delhi, Hyderabad and Mumbai.

“We often don’t know the ultimate buyer as the trees are bought by growers in Europe and India for resale. In India, customers are mostly landscaping contractors. The feather in our cap was the supply of plants to Disney in Hong Kong. Currently, we are working with a leading landscaping company on a Middle East project. We are also working with a Spanish company on projects in the Middle East,” Natarajan says.

To explain the demand for these trees, Natarajan says: if a 40-acre resort is being set up, it may need 100 varieties of plants for anything between Rs 75 lakh and Rs 1.5 crore.

The demand for full-grown trees has been increasing in India, especially with the arrival of foreign landscaping architects. With a landscaping budget of Rs 50 crore, the huge demand from the Delhi Airport project is expected to empty out all the palm nurseries in India. Vimanaa already has orders for 500 phoenix silver trees from Mumbai, Delhi and Hyderabad airports.

Each palm tree that is replanted fetches anywhere between Rs 10,000 and Rs 30,000, depending on its variety. Asked about his turnover, the cautious entrepreneur says: “It is a highly fragmented industry, and as a new farm, we expect to corner at least 1 per cent of the total market in the coming years.” That’s all. “The business grows along with the GDP,” he adds.

In this industry, the mortality rates while shifting trees are very high. But, Natarajan and his two trusted hands—Yuvaraj H and A Manalan—have ensured that his farm has the lowest mortality figure in this small but growing industry. “Relocating is an art and has to be done in a scientific manner. Full-grown trees require cranes as some palm trees weigh in at a tonne apiece—they need cautious handling,” explains Yuvaraj.

From Chennai, these palms are sent all over the world in open-top containers. Some of the trees have travelled 42 days by sea, and survived. “Each of them is like a child and we have to wait for them to grow into teenagers, only then can we retransplant them elsewhere. After collecting, we have a 5–10 per cent mortality rate. Others have 80 per cent mortality because they are only interested in making money and not learning the trade. We have successfully collected and retransplanted 3,000 palms from around Chennai. They are all growing very well,’’ says Manalan.

The exotic among plants are governed by the Convention for International Trade on Endangered Species (Cites). It’s also a business where the rules of the game change, often without much notice. The European Union recently brought in new rules making it mandatory for imported plants to be in a year-long quarantine, in the host country. “It is very important to plan ahead. In a few months, I will be the only exporter with EU certification, as I have already created a pest-free area on the farm which is regularly visited by the certifying experts,” says Natarajan.

Sunil de Sousa, director of Greenpiece, a Bangalore-based landscaping company that undertakes big-budget contracts, says that demand for ‘softscaping’, that is plants and trees, has been growing by 30-40 per cent every year. The industry’s phenomenal growth has been aligned with demand in the hospitality, institutional and real estate sectors. Any landscaping architect would require 300 to 500 varieties of plants sourced from a myriad nurseries, and this is where speciality growers like Natarajan come in. “He is one of the few specialist palm cultivators who grow trees to the required height. It’s a business where lots of time and attention is required, while the demand can come in an instant,” says de Sousa.

Natarajan learnt the business by trial and error and by looking up information on the internet. Over the last five years, he has understood the requirements of his foreign and domestic clients, and is now looking to grow the palms—in both numbers and size—quickly to keep pace with demand. He is also improving his product range by introducing avenue trees, ornamental trees and shrubs. However, the focus remains on palm trees that have markets in southern Europe, China, India and the Middle East.

Horticulture has been Natarajan’s first love and Vimanaa is his second venture, after an earlier attempt to grow orchids along with his father. The family business wound up after the government acquired the land.

“This business calls for immense patience, hard work and constant learning, as the weather patterns are changing. Selection of appropriate material, growing conditions, microclimate, workforce training, water resource management and pest and disease control are some of the key success factors,” he says.

The entrepreneur-cum-farmer also rattles off scientific names of trees with the ease of a botanist. As demand soars, Natarajan is urgently scouring locations nearer to his demand centres, as the cost of transportation has more than trebled since he set up Vimanaa. “It makes more sense for me to move to the outskirts of Delhi, Mumbai or even Bangalore as demand increases.” He is already growing some varieties at Madikeri in Karnataka and in Sikkim. At his farm near Chennai, he grows 60 varieties of palm, both imported and local. From small, single shoots in polythene covers that are a year old, to sturdy four-year-old palms growing in European tubs—his farm is full of plants and trees of various sizes.

This is a business with lots of ups and downs. The current recession has reduced exports to a trickle. But sometimes demand comes from unexpected quarters. Natarajan recalls that two years ago an ornamental plant with thick long leaves called ‘mother-in-law’s tongue’ was fetching up to Rs 40,000 per plant in Southeast Asia. Demand for these plants has surged due to the belief that they bring good luck. But not all demand is erratic. Natarajan had exported 500 silver date palms to adorn Beijing for the 2008 Olympics.

Among popular palm trees that are grown here are Dypsis decaryi, an unusual palm from Madagascar with a triangular trunk; Syagrus schizophylla, a Brazilian variety; and Wodyetia bifurcata, an Australian variety commonly called the foxtail palm, which is popular because it grows easily and quickly. Bismarckia nobilis is a handsome palm with silver-coloured leaves from Madagascar, which can grow well in tough conditions. Phoenix rupicola is a beautiful soft-leaf palm from the lower Himalayan reaches, and North India’s khajur or Phoenix sylvestris—silver date palm—is the most popular landscape palm because of its low maintenance and ruggedness.

Among avenue trees, the Brachychiton acerifolius, or the Illawarra flame tree, with its bright crimson flowers, is the most sought after. The Brachychiton rupestris—Kurrajong tree or bottle tree—is an Australian showstopper. It is easy to transplant and can survive up to three months after being uprooted. Plumeria—frangipani or pagoda tree—is a delightful flowering tree with fragrant flowers and is very popular with women, says Natarajan.

From the contractor’s need to set up that garden in a hurry (and as economically as possible), to the lady’s fancy for a pagoda tree that she can admire at leisure, the landscaping architect has to juggle with many whims and business decisions to do his job: set up that garden overnight.