India’s luxury retail marketers still have to overcome a few hiccups before the sector can show its full promise. 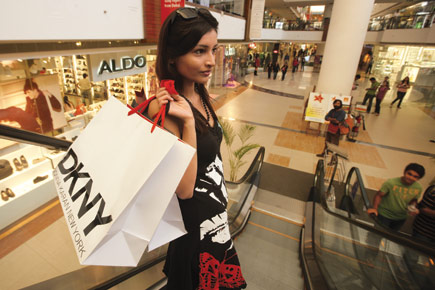 India’s luxury retail marketers still have to overcome a few hiccups before the sector can show its full promise.


Telemarketing messages are not an ideal publicity tool for a luxury brand. It’s okay for Reliance Trends to be blatant: ‘Festive 09 collection Now In Store. Shop for Rs 3,000 & get Gift Coupons for Rs 2,000 Free at Reliance Trends.’ But a luxury fashion retailer ought to never be so populist, urgent, or desperate as to communicate via a Bulk Message. So it’s telling that over the past several months—at least once on a regular weekend and twice on long ones—customers of a clutch of Mumbai’s top-tier brands have been bombarded with SMSes about discounts and end-of-season sales that sometimes last months at a time. ‘Last 10 days of upto 60% off on Moschino, Ferretti, Jean Paul Gaultier & Marc by Marc Jacobs at the Taj Colaba! 4 brands at one place! Grab yours!’; ‘1st time in Mumbai DVF designer collection! Indulge yourself in bold colours and lush prints. Discount up to 50%.’

In 2007, at the height of optimism about India’s potential as a luxury market, researchers predicted that Indians would soon be buying up everything they never had. That the Indian luxury market would somersault to $30 billion by 2015. That Indians would follow the Chinese example. Brand ambassadors spoke about the wisdom of the Indian consumer, a discerning soul who apparently understood service and luxury because of an acquaintance with darzees and domestic help. In less than three years, those projections are beginning to look fantastical. At this year’s International Herald Tribune luxury conference, Mohan Murjani, chairman of the Murjani Group and former high priest of India’s luxury fashion business, admitted that many luxury brands operated on financial models that were “far too optimistic”.

Retail sales hover at around $500 per sq ft, nowhere near 2005 estimates of $1,000 per sq ft. Profit margins are also half the projected numbers. The only figures that have exceeded calculations are rents. First generation luxury marketers like the Murjanis and Sachdevas of TSG (Moschino), who trained their focus and resources on the high-gloss, low-return luxe market, have been scalded by the excesses of their own steamy expectations. Regulatory and infrastructural conundrums aren’t the only things companies left in the business are trying to fix in luxury retail management 2.0. They’re also scaling down their ambitions.

Retailers have understood that a better strategy is to exploit the promise of lower segments, which offer lucrative margins, and use that money to expand within the luxury space. “Getting value for money is still in our genetic code,” says Amit Dutta, managing director of Luxury Hues, a consultancy helping international brands chart a new course in India, “But there is a huge market of young Indians who want to nibble at luxury. They’ll buy a pair of shoes or jeans for Rs 5,000, but they’ll think twice about spending Rs 30,000 on a blouse.” The game is to draw this bulge bracket of buyers without any loss of perceived prestige. Anjani Kasliwal, head of Brandhouse Retail Ltd, a division of S Kumars, believes her company’s longevity demands such well-deliberated diversification. Brandhouse launched Escada and Alfred Dunhill in 2007. The firm quit the Escada joint venture in 2008, just before the international women’s fashion house filed for bankruptcy, while the gentlemen’s clothier still survives in Delhi and Bangalore. For now, the company hasn’t inked any more deals with international luxury brands; instead, its next offering is Oviesse, a mid-range Italian clothing label. “We want to serve all segments of the market,” she says, “so we have brands at all price points, and we believe that is the way forward.”

True, the most anticipated new launches in the country are high-street brands Zara and Top Shop. The Murjani Group has released licences they held for Gucci, Bottega Veneta and Jimmy Choo, and abandoned plans to launch La Perla, the gold standard lingerie company. The company has decided to de-emphasise top-end luxury and focus on premium tags like Tommy Hilfiger and FCUK, which offer much better returns. And Genesis Luxury, which distributes multiple luxury entities including Bottega Veneta and Jimmy Choo, is scheduled to launch Tie Rack, a sensible salaryman brand of neckwear.

“I think the new luxury retailer is wiser about marketing and strategies, prudent with money, and understands that the real market to tap is the aspirational one,” says Bandana Tewari, fashion features director for Vogue India. “If these retailers can use the middle class boom to get them into the fold, eventually they will graduate to luxury.”

When the Indian Government first allowed foreign direct investment of as much as 51 per cent in single-brand retail operations, everyone believed the Indian luxury market would take about five years to take off. More realistic recent assessments have lengthened it to more than ten years. But even this may be too little time to dislodge the main stumbling block for luxury retail expansion: real estate. Especially in Mumbai. “We’ve been looking to expand into Mumbai for some time, but there is no infrastructure for high-end brands there,” says Kasliwal. “The only option that exists right now are five-star hotels and that’s just not viable in terms of cost.”

As per earlier projections, mall space in the country was supposed to hit 100 million sq ft by 2008, but a recent report by real estate firm Cushman & Wakefield says construction of over 10,000 sq ft of mall space was deferred last year due to decline in demand. Total available space today is around 60 million sq ft. And only a minuscule fraction of that—Emporio in New Delhi, Galleria Mumbai, and UB City Bangalore—offers the requisite ambience for luxury shopping.

The first band of retailers came with unique propositions. When Louis Vuitton was assessing the Indian market, it considered setting up shop within three floors of Hamilton House, a beautiful heritage structure in Ballard Estate, Mumbai’s 22-acre Londonesque business district. With its wide leafy lanes and classic architecture, Ballard Estate offers Mumbai’s best possible high street solution, an area that could have easily grown into the city’s own Bond Street. The deal didn’t work out for Louis Vuitton, and like most other brands, it settled into a five-star hotel.

The Murjanis housed Gucci, Bottega Veneta and Jimmy Choo at the custom-made Galleria, an almost 4,000-sq ft shopping annexe next to the Oberoi Trident hotel. It is a luminous address, but at a monthly Rs 700 a sq ft, the overheads are stratospheric. One of the reasons why all three stores proved monetary challenges (before its relaunch by Genesis Luxury, Jimmy Choo was closed down after most of its stock was sold for Rs 5,000 apiece, a huge mark down for accessories that usually cost more than Rs 25,000). “The Murjanis really showed how it’s done,” says Tewari, “their stores were beautifully crafted. A high-end brand needs that sort of aspirational space. You have to feel like you’re entering another world, it’s part of the experience.” But who can afford to create such aura? Especially if you’re in a one-sided relationship.

Most of luxury retail’s first marriages between foreign brands and Indian distributors have ended (or ended up in counselling). The idiosyncrasies of these 51:49 joint ventures have been particularly destructive for Indian investors. “The franchisee deals weren’t always lucrative. The brands came in thinking that there is a market here salivating for big international names, and if they can just get a local distributor in place then that was enough. They were wrong,” says Dutta of Luxury Hues. “The franchisee has the burden of the P&L [profit & loss account], he’s responsible for marketing the product, creating a consumer base and investing in the infrastructure, and all this for a limited contract. In two years, the mother company could even find another partner and the local guys would be out on the street.”

Some international companies, say critics, forged relationships with NRIs who knew little about the domestic Indian market, or with people who were clueless about what merchandise to offer and how to market it. “Many of the old partnerships were made in haste and there were errors at both ends,” says Tewari. “With experience now, everyone understands that they have to tailor their plans for the Indian market, which is entirely different from other Bric countries [namely Brazil, Russia and China].” The brands that survived the last two years free of drama are brands that launched with sleeping partners.

Since 2007, international firms have been lobbying the Government to allow 100 per cent ownership of single-brand retail outlets. But till that wish comes true, everyone’s thrashing about for ideas. It is rumoured that even the Gucci Group—their licence has changed hands to Luxury Goods Retail, run by Reena Wadhwa, wife of Ashok Wadhwa, founder of Ambit Finance—is trying to pump more money into its Indian subsidiary. For the foolhardy, there are plenty of bankers and lawyers who can work out multi-tiered deal structures that bypass Indian regulations on ownership to effectively achieve full control.

If brands were masters of their own Indian destiny, they may have a better chance against the vagaries of the market, and may even invest in their occupation of consumer mindspace—or some special recess within it—for the long term. Right now, wealthy or not, few Indians can discern the significance of a Bottega Veneta Knot or grasp why a limited edition Louis Vuitton Monogram Roses Neverfull canvas bag should be worth nearly Rs 70,000. And those who can, prefer to buy their luxuries in London where prices are lower and you get a Vat refund at the airport. “Luxury is as much about the myth surrounding the brand as it is about quality,” says Dutta. “Brand building is extremely important—so far no one has done it, and that’s why only the big logo brands like LV have worked.”

The great big hope is that globalisation will deliver. Exposure to world markets could have a ripple effect on Indian consumption patterns. KSA Technopak Advisors, which tracks India’s luxury potential, reports that the country’s luxury consumer base has been increasing at a steady 13 per cent annual clip, from 1.16 million in 2005-06 to more that 1.60 million in 2008-09.

The numbers probably exclude India’s black money millionaires who live in improbable places, making their money from unlikely sources like scrap metal or beauty clinics, but want to buy themselves some sophistication. Some industry insiders say Louis Vuitton in New Delhi has one of the highest per sq ft sales of any LV store in the world. Its customers come from Delhi, but largely from Chandigarh, Amritsar or Ludhiana—and most pay in cash. As a result, according to urban retail legend, Louis Vuitton had to get itself a bigger safe. That’s the sort of home improvement that a luxury retailer would love to make.