“Keynes Is Your Classic Middle of the Roader”

Sixty years after John Maynard Keynes's death, his brand of economics, known as Keynesianism is back big time. 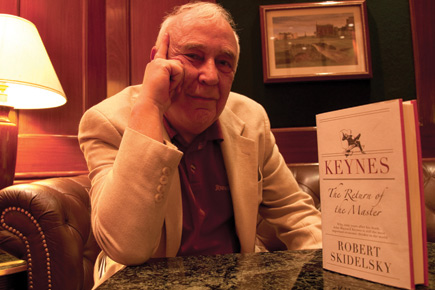 Sixty years after John Maynard Keynes’s death, his brand of economics, known as Keynesianism, is back big time.


“In the long run, we are all dead,” economist John Maynard Keynes famously said. But 60 years after his death, his brand of economics, known as Keynesianism is back big time. Robert Skidelsky, political and economic historian, has virtually spent his life studying Keynes and his ideas. After his critically acclaimed three-volume biography on Keynes, comes Return of the Master. He spoke to Open about the current economic mess and what Keynes thought of India.

Q How did your fascination with Keynes begin?

A It began when I was doing my Ph.D. I wrote a book on the politics of the Great Depression called Politicians and the Slump. At that time Keynes was, of course, a major dissenting figure. It was before his General Theory had been written. Even then he had very strong ideas on policy. He believed we needed to take positive action to counter the Depression, and so I gradually got interested in him as a person, his ideas, his brilliance and the fertility of his mind. But I hadn’t imagined the love affair would last in excess of 30 years. Just when I thought I was finished with him, he’s returned in my life, and he’s returned as a force in everybody’s lives.

Q There seems to be a cyclicality to Keynes’ popularity. Do we seem to remember him only when things go awry?

A Probably. Let’s wait for the next crash. Maybe we would’ve learnt a bit. One of his key doctrines was that there is unescapable uncertainty. The beauty about Keynesianism is that it doesn’t demand the kind of devotion Marxism does. It reflected a balance of power between government, business and trade unions. It was economics fitted for the middle way.  Keynes is your classic middle-of-the-roader—pilloried by the left and right in equal measure. He said, “I haven’t come to destroy capitalism, but to make it safe, and make the world safe.”

Q Is capitalism safer today than in 60s or 70s?

A In one sense it is, because there is no obvious alternative. But the dominance of unregulated markets and the future of globalism are in question because they are throwing up too many problems. If you get a succession of big financial crises, you start asking questions about the costs of this capitalist system. And therefore the demand for the rehabilitation of the role of government is increasing.

Q Where did Keynes stand on globalisation?

A He was born in 1883 and grew up in what’s called the first age of globalisation, which ended in the First World War. In the inter-war years, they tried to restore it, but it was lopsided globalisation. That lopsidedness is still with us. One of the big imbalances was the gold standard; gold was accumulating in one or two places—US and France. That was imposing a deflationary pressure on other countries. Keynes regarded that as one of the main causes of the Great Depression. IMF was set up to mitigate the problem. Now we have it again. This time the shoes are on the other foot. The US is running current account deficits while China and India are accumulating big surpluses. So this lopsidedness is deflationary. I don’t think Keynes would have liked the idea of specialisation and division of labour. All of manufacturing resides in China, services in India, so what are they going to do in America? All this stuff about America becoming a super-technologist would have been a pie in the sky for Keynes. He said a big country needs to have a variety of things. He was a free trader, a liberal, but he was quite sceptical of globalisation. He would only have offered qualified support for globalisation.

Q Would he have approved of the huge stimulus packages that have been doled out?

A Oh, yes! There is a big collapse in demand. So you have to find another exogenous source of demand.

Q From socialism, India seems to have walked in straight to Keynes’ lap…

A India has found a far greater balance than former communist countries. Manmohan Singh himself is a Keynsian because he was well taught. He learnt his economics in a good school! It probably explains the whole balance of his policy—to liberalise while not accepting that the market is always right and the government always wrong.

Q Keynes’ first published work was on India. What attracted him?

A He was influenced by India. Some of his early ideas of hoarding and money came from India. He thought the Indian propensity to hoard gold was a major explanation of its poverty. He got this idea of money as a store of value from Indian attitudes to gold.  After all when people save, they’re not saving to invest in securities. They’re saving to hoard.

Q Will Keynes be shelved again when the economy begins to look up?

A Probably. Or maybe we’d have learnt a bit. Let’s wait for the next crash. One of the key doctrines of Keynes was that there is inescapable uncertainty. We shape our future, and we don’t behave the same way we did the last time. Events never come in exactly the same form. The idea that you can price the future exactly is one of the biggest intellectual fakes. But it’s a comforting fake.

Q You even lived in Keynes’ Sussex country house for 20 years. Was it by choice?

A His house was on the market when I was working on the second volume of the Keynes biography, and I jumped on it, for it gave me the right inspiration and vibrations. The family had sort of taken out all things Keynes. It was a barebones structure with only a couple of travelling boxes with the initials JMK etched on them.

Q How was he as an individual? He comes across as a jolly good fellow in your accounts.

A Well I don’t know. I’ve never met him but the answer is, if he had liked me I would have liked him. He could be very charming with people who he thought were worth it. But on the other hand he could be very rude, especially to intelligent people who said stupid things. He wasn’t rude to stupid people. While reviewing Friedrich Von Hayek’s first major theoretical book Prices and Production, Keynes said it was an example of a remorseless logician starting with false premises ending in madness. He had a very striking turn of phrase and he could cheese off people.

Q As an economic historian how do you see the future economic order shaping?

A The real question is how the world economic system can accommodate China and Russia. And, of course, there’s Islam and no one quite knows how to deal with it. I talk of these two countries because they’ve got somewhat antagonistic value systems. They will be awkward partners to put it mildly. The Chinese have their own way of thinking. India should be an important player, but I think in many ways it’s a much easier country to engage with. India is a lot more predictable than Russia and China. Much of India’s elite is trained in the West anyway.

Q Do you think the current economic scholarship has let us down in this crisis.

A When the crisis struck, I was struck by how little the economists had to say about it. All the commentary was coming from financial journalists and people in the market. Paul Krugman and Joe Stiglitz were two exceptions, both Keynesian, and to an extent Larry Summers, who tried to analyse things for the intelligent reader. Most theoretical economists like Robert Lucas had nothing to say and that’s because their theory was in holes. You shouldn’t be in a hole like that when the markets are behaving in a way Chicago economists said they should. Theories of efficient financial markets didn’t envision anything like this. So they were really quite silent, and are still recovering their breath a bit. The explanation that comes naturally to most conservative economists is: it’s all the government’s fault. In this case, they held that the Federal Reserve made the mistake of expanding credit too much, which led to the bubble. But if you believe in rational expectations, you shouldn’t be fooled by agents. The crisis has exposed several inconsistencies in the neo-classical view of the world, or the Chicago School view of the world.