Hemp, long associated with narcotics, is also a useful raw material for legitimate products ranging from textiles to pharmaceuticals. Indian entrepreneurs are beginning to exploit its potential 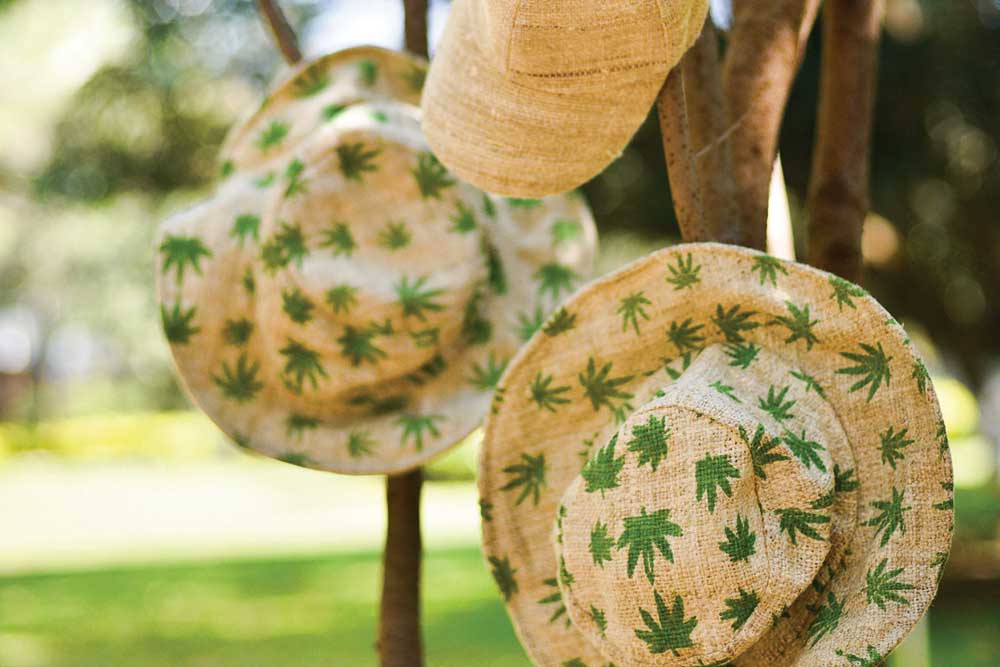 ELSTON MENEZES and Benson Martis knew nothing about cannabis or hemp until they had finished their schooling in Kuwait and reached Bengaluru to study in a college there. They were still in their late teens when a friend returned from Nepal with a wallet that he said was made out of hemp. That piqued their interest. They were aware of marijuana and the narcotic aspect of the cannabis plant, but a little research told them that almost 30,000 products, from fabrics to medicines to car body parts, could be made from non-narcotic strains that went under the label of ‘industrial hemp’.

They mulled over getting into business but were wary. There could be trouble from the police and most people still associated hemp with narcotics. They decided to start by creating awareness of hemp products. Benson went to Nepal, where the government promotes hemp as a cottage industry, and got back a few products. In 2012, they took their first steps and started selling simple hemp products like bands, flip-flops, wallets in flea markets in and around Bengaluru. At their stalls, some people would touch the fabric being sold and ask whether it could be smoked. Police would occasionally come, stare at the logo, which was a giant cannabis leaf, ask what they were selling and smell the products.

“Three years back, we started seeing a change in the mentality of people around Bangalore. People were not asking us, ‘Bro, do you have something to smoke?’ It would be like, ‘Bro, what kind of hemp products do you have?’ The tone changed. We got some customer base from that point of time and started realising that there can be a real fruitful business [built] out of it,” says Menezes.

Their company BE Hemp now sells a variety of hemp products online, such as wrist bands, ankle bands, bags and slippers made of handmade Indian hemp fabrics and finer cloth imported from China and Spain. “We are also trying to sell the products of all hemp companies across India, at the same time,” Menezes says. Initial sales of rolling paper were Rs 2,000 per week but went up to as much as Rs 60,000 per week at one point.

One of their main products used to be raw hemp seeds, but they had to stop selling these last year because the government suddenly tweaked the rules for its sale. It also illustrated how nebulous the regulations were. “That was one of our best products, just raw hemp seeds got from the wild. We [have now] started making soaps and everything out of it instead. Because we can sell processed products from seeds, we can’t sell anything raw,” he says.

Marketing also poses its own hurdles, as they discovered three years ago with Facebook. Menezes says, “We made our first 100 per cent hemp notebook and put up a paid advertisement on Facebook, just to see how many people are interested and how we could sell the product. They let us run the ad for about three days and then they blocked it saying that we are selling illegal products. We were like, ‘It is just a notebook.’ We tried replying to Facebook and they sent a message saying this is an automated message and your message will not be taken again. That is why we thought of setting up our own website and it is almost done. We get most of our orders from returning customers and on Facebook from those who find our page somehow or the other.” But they still want BE Hemp to eventually be what Menezes terms the ‘Amazon of hemp’.

“What we want is to get a strong hold of the value chain, where we get the fibre processed into yarn that we supply” Yash Kotak co-founder, Boheco

Bombay Hemp Company or Boheco, founded in 2013 by seven men in their early twenties, is one of India’s leading start-ups in the industrial hemp products space. As students of HR College, Mumbai, they had found themselves together working for a solar rural electrification project. In 2010, when one of them went to Australia, he saw a town named Margaret River operating only on two commodities: one was grapes and the other hemp, from which food, clothing and even houses were being made. The seven sensed a business opportunity in India because cannabis grew in abundance here, but they still needed to be clear if it was feasible. “Coffee shops to coffee shops, Saturdays to Saturdays, we used to meet up,” says Chirag Tekchandaney, a co-founder.

After college, they picked up jobs in different sectors but the idea of the business remained in the backdrop. About five years ago, they finally set their business up. Some of them hopped onto a train to Uttarakhand, a state that had hemp in abundance and also several small legitimate businesses based on it—like official bhaang suppliers, mandis and hemp seed outlets. There they met a former chief secretary who had signed an excise policy for the use of hemp fibre and seeds in three districts. He also put them on to others in the administration. They would go to government officials with a brick, a plate of salad or a T-shirt to illustrate what uses hemp can be put to. From nodal governmental agencies making hemp fabrics, they acquired some and gave it to designers back in Mumbai, but the cloth turned out to not be good enough. “We shifted focus and said, ‘How about looking at other countries for the fabric just to build a market?’ We got some from Romania, Taiwan and China. We made our first white shirt in 2014 and sold about 150 of those priced at Rs 2,487 [apiece],” he says.

In the initial years, they also went on excursions across the north and northeast to collect wild hemp seed varieties. The goal was to conduct further research, a necessity if India were to ever become a global player in this field. For industrial hemp to be accepted and encouraged here, the Government must be able to differentiate it from the narcotic varieties of the plant. Tetrahyrdocannabinol (THC) is the psychoactive compound that gives cannabis its narcotic properties. Industrial hemp plants in India have low THC levels of 2-3 per cent and are considered non- narcotic. The global norm is under 0.3 per cent. The first step for large-scale indigenous hemp cultivation is therefore to develop crops in which the THC content is below 0.3 per cent. The Government needs to be especially clear on the level in the plants to do away with a curious anomaly in its existing policy on cannabis.

THE NDPS ACT of 1985 states that industrial hemp can be grown for fibre and seed purposes. But there is no standard in India to test the THC limit of seeds because science hasn’t kept up with policy. “Policy allows it to be grown legally, but you don’t have the right kind of seed to grow because you can’t tell whether the seed carries THC or not. We are trying to naturally breed the right kind of hemp seeds that can be grown by the farmer. It is a process that will take some time. Basmati took seven years to breed itself to a consistent grade of rice. That is exactly what we want to do. We want to domesticate the crop. At the moment, it is growing in the wild. You can’t really tell whether it is high THC or not. We want to lower its THC where it can be used for industrial purposes. We want to make low-THC hemp seeds available to the farmer. We will buy back his produce, process it and take it to the customer,” says Tekchandaney. Boheco now has MoUs with government institutes and research projects to yield low-THC seeds, great yarn or a plant from which phyto-pharmaceutical drugs can be extracted.

“Three years back, we started seeing a change in the mentality of people around Bangalore. They were not coming and asking us, ‘Bro, do you have something to smoke?’” – Elston Menezes co-founder, BE Hemp

Globally, he says, industrial hemp products are a $38 billion industry. In India, which is only just getting on the train, the potential is vast. Hemp has numerous advantages over, say, a crop like cotton. It takes much less water and fertiliser to grow. It is a stronger fibre and grows faster, too—in about three months, as against six to nine months for cotton. Farmers can have multiple harvests in a year. Boheco sees its biggest opportunity not as a manufacturer of consumer products, but as a supplier of hemp yarn. At present, China has captured 70 per cent of this market. “To compete with China, we need to start [using] that same process here, so that tomorrow we are the two main manufacturers in the world. What we want is to get a strong hold of the value chain, where we get the fibre processed into yarn that we supply. For that, we need to master the technology of processing hemp to a standard where it can be accepted by industry,” says Yash Kotak, another co-founder.

An organisation trying to get hemp businesses under one umbrella to lobby with the Government is the Indian Industrial Hemp Association (IIHA). Its founder, Rohit Sharma, comes from a family of farmers with land in Haryana. Wild hemp would grow on their fields in abundance after summer and attempts to remove it hadn’t been successful. Sharma started to read more on these plants and found out about hemp’s business potential. He got into the business of cannaboid (CBD) hemp oil. CBD is a non-narcotic compound that has medicinal properties. Sharma says getting the business started had been taxing because the government couldn’t comprehend the legitimate aspects of hemp. “We used to go and say ‘hemp’, they would say ‘bhaang’ and not even want to talk to us. To make them understand how the world is growing industrial hemp, we made a one-minute video and started sending them that,” he says.

Sharma founded the IIHA five years ago to support industrial hemp businesses. He says they are talking to a number of states to initiate cultivation. In Uttarakhand they have just got a pilot commercial licence to grow hemp in 1000 hectares. “We will be doing a seed breeding program. By 2019 we will be supplying the seeds to farmers to grow,” he says. Commercialisation had been tricky so far because no one wanted to touch a plant associated with narcotics, and the loss had been entirely India’s. “The world has gone way ahead, we are just starting. Marlboro makes all their paper from hemp fibre, majorly procured from China. Fibres are used in bioplastics; like in Europe, BMW and Mercedes panels are made out of hemp,” he says.

Sharma says that hemp fibre has a vast potential market in India. “There would also be the export market for fibre and allied products. Then come seeds and the rest. Medicines that are expensive [elsewhere] can be made here in a cost-effective way,” he says.

But hemp regulation needs to be rationalised. For instance, Boheco has just launched hemp seed oil, but the company limits its use to cosmetic applications alone as, by law, its consumption is still a grey area. Yet, awareness is increasing gradually. In 2014, the company’s founders had been pitching the benefits of hemp foods at a farmer’s market when a woman came up to them and asked, “Hemp? Hemp toh non-veg hai, na?” Today, they don’t get too many questions like that.