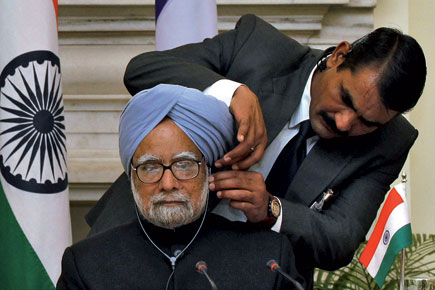 
In his address at the AGM of the Confederation of Indian Industry (CII), Prime Minister Manmohan Singh had this to say: “We must plan to finance our higher-than-normal current account deficit… for a few years.” In the third quarter of 2012-13, India’s current account deficit (CAD) touched an eye-popping 6.7 per cent of GDP. The CAD measures how short a country’s export earnings, asset income and inward remittances have fallen of its import payments, dividend/interest outgos and outward transfers of the non-capital kind. While NRI remittances have slid a little, a yawning gap between India’s imports and exports now poses the threat of a Balance-of-Payments crisis for the first time in two decades.

For all of 2012-13, the PM expects India’s CAD to clock in at a less scary 5 per cent, but even this is twice what it should be. “It is something to worry about,” warns Dr Surjit Bhalla of Oxus Investments, “especially so in this decelerating growth scenario.” What is worse is that India’s major imports—of gold and crude oil—are used for consumption rather than for enhancing economic productivity. In fact, the only reason that external transactions can go on without the rupee’s exchange rate in a tailspin (or foreign reserves depleted defending it) is that India relies on investment inflows of funds from abroad to plug its trade gap. Some of this money comes in as FDI, but most of it is ‘hot money’ invested in Indian assets by FIIs. Either way, as a Crisil report puts it, ‘India will need a river of capital inflows to cover its CAD in 2013-14’.

What the PM wants is to open Indian markets further and wider to attract these inflows. The danger is that the money may not be as forthcoming as he hopes. In the third quarter of 2012-13, India was lucky to get enough money in, but given the country’s poor economic record, “sustaining that level of inflows would be quite challenging” in Bhalla’s assessment. One way out would be to push through a dramatic set of economic reforms to draw large lumps of FDI, but can the Centre do it?

Another way to earn dollars would be by boosting exports, but how this can be done is a tough question. Letting the rupee fall ought to raise export competitiveness, but many exports display low price-elasticity and gain little this way. In merchandise sectors, rising labour and other costs have already neutralised the potential benefits of a cheaper rupee. Will slashing energy subsidies, then, be the only way to restore some sanity to India’s external accounts?