The Group’s Chairman has shown no inclination to draft his memoirs, but Tata watchers deserve clues on at least four mysteries of his term 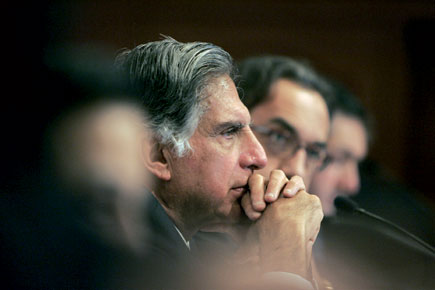 The Group’s Chairman has shown no inclination to draft his memoirs, but Tata watchers deserve clues on at least four mysteries of his term


Tata fascinates me. Not just as a brand that sounds like baby babble but still symbolises trust and longevity after a century-and-a-half of existence, but as a business house that is greater than its financial worth—like art. And like art, some of the finer aspects of its raison d’etre shall always be cryptic, granted. Group founder JN Tata’s ultimate business goal, as one may deduce from Frank Harris’ splendid 1925 book on the man, was by no means evident even to fellow rationalists of his time. After all, a strategy that’s too obvious is not one, and his successors have been equally enigmatic.

Disappointingly, Ratan N Tata has shown no inclination so far to draft his memoirs once he retires next week as Group Chairman. Sure, the founder’s wit as a diaryist may well be unbeatable (see the appendix of Harris’ book), and the disclosure of some secrets may actually be unwise, but Tata watchers arguably deserve clues on at least four mysteries of Ratan Tata’s tenure.

Of immediate relevance would be his “good M” and “bad M” remark after Tata Motors flipped its Nano factory over from Singur in Bengal to Sanand in Gujarat. This was not about Marxists and Macaulayites, nor about Margins and Marketshare, it was about a couple of individuals. So who was good and who bad in his estimation? He did not specify. And if it was “stupid” not to be in Gujarat, as he famously said on that occasion, was it for reasons other than the sweet deal his company was offered?

Even more baffling has been la’affaire Tata Finance, the self-spotted scandal that saw its CEO axed in 2001 for his alleged misuse of funds via a subsidiary and a subsidiary of this subsidiary. It could easily have escaped the strictest system of corporate governance, and it was clearly to the Group’s credit that it reacted so sharply to rogue trades found on its ledgers; almost no one has alleged that Ratan Tata himself was privy to any of it. Yet, the palpable panic in Bombay House seemed to suggest more than just the horror of a top executive caught flouting Tata’s code of ethics; was something amiss with what was originally meant, code-willing, to be a bona fide investment of strategic significance? And while its corporate DNA of integrity has always been critical to the Tata Group’s sense of selfhood, were the genes that built its empire really at risk? Forgettable as the episode may now be, Ratan Tata’s own version of it would be of interest to those confounded by all the nerves on display. What was the big scare? Hopes of a bank licence in jeopardy? Unlikely.

For a group that has rarely shrunk from anything too revolutionary or steamy, its huffle-shuffle in India’s youthful café market has been somewhat mystifying too. At the turn of the millennium, Tata Coffee took a minority stake in Turner Morrison’s Barista chain of coffee shops. But once its majority owner suffered a setback or two and abruptly called it quits, Bombay House took surprisingly little time in doing likewise. Both partners ended up selling Barista in 2004 to Sterling Infotech for a song—or what sounded like one—given that the latter resold it to Italy’s LavAzza not too long afterwards at an obscene profit. Tata Coffee, of course, now has Starbucks on its side, and its plans in this market remain roughly what they were 11 years ago. But what explains its sudden loss of confidence in Barista? Was it really a write-off? Why?

And finally, the big question that has haunted many an image consultant in India for at least a decade. Why would a business group so sure of itself snap off an old tradition of companywise autonomy and consolidate all its public relations with a single agency? That is exactly what the Tata Group did on 1 November 2001, assigning its big-daddy account to Niira Radia’s Vaishnavi in an act so imperious that it stunned India’s PR industry. Tata, as the group chairman had been saying for several years, was practically a single brand for all market purposes, but even so, observers are still in the dark about the grand rationale of the move.

Far easier to grasp have been the Group’s M&A deals overseas. It wouldn’t have been a $100 billion group without these. And, guess what, it wasn’t left strapped for cash either. Today, the market value of Tata Sons’ stake in Tata Consultancy Services alone is enough to cradle Tata Steel, if need be, while its acquisition in Europe flounders. It’s safe.

It is the four other puzzles that Ratan Tata—and Ratan Tata alone—could help solve. With only scraps of publicly available information at hand, Tata watchers have had to resort to that old abstraction, Tata’s brand values, and comfort themselves with the assumption that sound reasons must have underlain all those oddities, but it would help if Ratan Tata took the trouble to enlighten us—if only to make us feel less infantile in our trust of Tata.