This entrepreneur began bullet proofing vehicles in the 1980s’ Punjab, but now finds that demand is getting stronger and stronger. 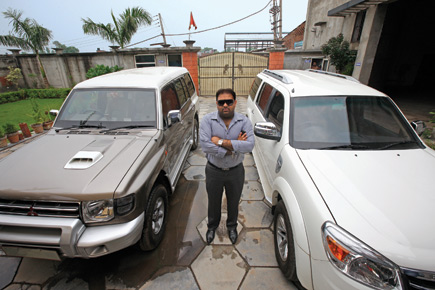 This entrepreneur began bullet proofing vehicles in the 1980s’ Punjab, but now finds that demand is getting stronger and stronger.


It’s an unlikely setting. Or a very likely one, on second thoughts. As you race past Punjab’s busy city of Jalandhar on the Grand Trunk Road on your way from Delhi, you encounter a roundabout that leads to Pathankot. Here, virtually in the middle of nowhere, one of India’s most enterprising businessmen runs a business of bullet proofing vehicles. With a boxer’s thick-set build, Sunchit Sobti rather looks the part. You feel you might have spotted him somewhere, perhaps in a James Hadley Chase novel.

It’s a tough business, retro-fitting vehicles with reinforced steel. You can get him your regular Scorpio, Prado or old Ambassador—whatever—and he will armour it from most kinds of bullets that could conceivably come whizzing at you in India. And in insecure times such as these, such bullets form the nightmares of enough people to create demand for his services. Still. “In the late 80s,” recalls Sobti, “we were dealers for Tata Steel in Punjab when during a casual conversation Police Chief KPS Gill mentioned a need for bullet-proof vehicles for his forces. We had no idea how it was to be done, but we bent our back on the shopfloor, and I scouted for technology in India and abroad. The one good thing was that steel giants were not interested in operating in what they then thought was a tiny and unprofitable niche.”

Today, Sobti’s firm Laggar specialises in ultra-light steel sheets, some only 8.5 mm thick, that can save lives. But back then, it took the firm three years to come up with a 14 mm steel plate that could stop the chambered bullet of the dreaded AK-47 rifle. No sooner had he bullet proofed 12 Punjab Police vehicles than he found himself a marked man—newly placed in the sights of the Babbar Khalsa’s AK-47s. The state’s most feared militant group threatened to eliminate the entire Sobti family.

Determined to make the most of his technical breakthrough, Sobti got armed bodyguards and trained personnel to safeguard his plant and workshop. The toughest decision, though, was an emotional one: sending the kids to Wynberg Allen, a boarding school in Mussoorie (now in Uttarakhand).

Shootouts in Punjab have declined visibly since the 1980s, but the business is looking up for several reasons. One is the concept’s increasing popularity among men in uniform, especially the cops. “Laggar has supplied us with a lot of armoured personnel carriers,” discloses a senior Central Reserve Police Force officer in Delhi on condition of anonymity, “Attacks on the CRPF would have been far more deadly without these vehicles.”

The other reason is a boom in retail demand, with more and more individuals seeking a safer drive to work (or whatever business they must conduct). A Pajero can be bullet proofed for anywhere between Rs 7 lakh and Rs 35 lakh. It takes about 25 days, and Sobti has clients across India, from Punjab’s liquor baron Monty Chaddha to Andhra’s media moghul Ramoji Rao.

So, what does it take to turn, say, a Prado bullet proof? Elaborates Sobti, “Once you give us the car, we change everything but the engine. It is like giving new birth, but inside the womb, if you like, since we cannot mess with the basic structure. There are two main challenges. The first is to ensure that the bullet proof car looks no different from one that’s not been armour plated. The second is to make sure that the suspension, which we replace, can take the extra weight. We are proud that we do all this better than what many car giants with their large factories can manage.”

Making the vehicle look normal is important. You should be able to slip into traffic without attracting attention. Also, one safety trick requires that you travel in a convoy of identical cars, with a few dummies as red herrings; and so the bullet proof one should be hard to spot.

Laggar is now looking to expand big time into the government contract segment of business. Here, Sobti envisions his company as part of the soon-to-expand defence sector. According to a recent report published by the Confederation of Indian Industry (CII) along with the consultancy KPMG, India’s capital expenditure on defence imports over the next ten years is likely to be in the range of $115 billion. To boost domestic manufacturers of equipment, government policy requires defence deals to have an in built ‘offset’ clause—by which a foreign supplier must subcontract Indian firms for inputs to the extent of some 30 per cent of the contract value. India is expected to import armoured vehicles worth an annual $200 million, and these contracts would require that Indian firms be given subcontracts. Sobti senses opportunity here.

He won’t be alone. “Not only smaller players, but big firms like Mahindra & Mahindra are also looking at this opportunity with serious intent,” says Ramnath, an auto analyst with IDFC, a financial consultancy, “The offset clause will go a long way in expanding the market and give it critical mass.”

Sobti’s itinerary these days is a busy one. Over the next five days, he is to visit Gandhinagar in Gujarat, Nagaland in the Northeast and another place in Bihar. “This last port of call is getting real busy,” he says with a wink, “what with elections around the corner.”

Sobti’s factory, which also makes bullet proof glass, has little idle time. And so long as there is strife in this country, or even if a fraction of Naipaul’s million mutinies actually erupt, there will be nightmares aplenty of an assassin’s bullet finding its mark. Sobti’s Laggar could remain what analysts call a ‘sunrise business’ for quite some time.