This time round, the Chinese official media groups have created smokescreens, like they did in the run-up to the 1962 war 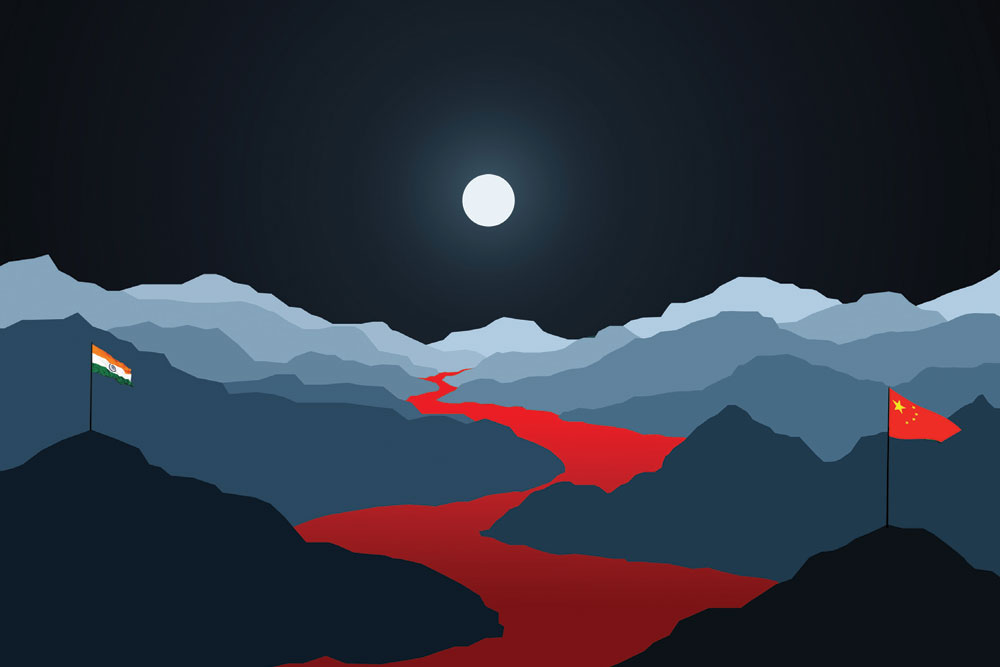 
THE SAVAGE KILLINGS of Indian soldiers by China’s People’s Liberation Army (PLA) troops in the freezing cold of Ladakh’s Galwan Valley on June 15th—with iron rods, clubs and other improvised weapons rarely used in modern combat—raise enormous concerns about the likelihood of an escalation of armed conflict, especially because tempers are high following weeks of continual brawls along the Line of Actual Control (LAC) and the loss of lives.

Most Indian Army officers speak of the violent incident in the Valley as a ‘localised’ skirmish, but American military historian Edward Luttwak, who is also a specialist on the grand strategies of empires and superpowers, describes it as a policy of ‘controlled escalation’ envisioned by none other than Chinese President Xi Jinping. It’s difficult to counter Luttwak considering that China has been needling relentlessly in the affairs of other countries and regions, including Taiwan, Vietnam, Japan, sea routes in its east and its own administrative regions like Hong Kong as well as Australia. The proof of its increasingly revisionist approach towards its neighbours and those elsewhere is playing out right before us. Again, the irony is obvious: India building infrastructure on its soil and upgrading its roads shouldn’t ideally frustrate China, which is on a zealous pursuit to enhance its military prowess and setting up new installations on both land and sea, even far beyond its jurisdiction.

Yet, China’s brinkmanship surprises none. After all, as a policy, Xi has also successfully infused ultra-nationalism into his vaulting geopolitical ambitions and expansionism. Since coming to power in 2012, he has steadily strengthened his grip as the paramount leader of China and got his own name and ideology enshrined in the ruling Communist Party’s constitution, hoisting himself to the level of the founder of the People’s Republic of China, Mao Zedong. Even the name of Deng Xiaoping, who led his country on the path of ‘socialism with Chinese characteristics’, a euphemism for unleashing China’s pent-up hunger for capitalism, was entered into the party constitution only after his death in 1989.

Xi is going by the Mao playbook. Like Mao—who, as if by force of habit, discovered ulterior motives in each movement or action by friends and foes alike within the party and outside and subsequently built cases to use military means for political purposes—Xi also seems to have a penchant for embarking on military expansionism to enhance his position and that of his country, now locked in a trade war with the US.

In 1962, before China went to war with India, Mao’s conviction—though way off the mark—was that India wanted to invade Tibet thanks to Prime Minister Jawaharlal Nehru’s Forward Policy. Nobody in his politburo questioned him for fear of reprisal. All were forced to echo his voice despite not being convinced themselves that India trying to protect its territorial integrity was the same as promoting a rebellion in Tibet, a job done by CIA agents. Mao, who was upset with Delhi offering the fleeing Dalai Lama asylum, also managed to win the Soviet Union’s consent, albeit temporarily, as the former superpower got embroiled in the Cuban missile crisis, to strike at India.

Now, Xi’s PLA chose to target Indian positions along the LAC at a time when the whole world is battling the Covid-19 pandemic that originated in China. Like in the past, Beijing’s tactics and strategies are invariably based on premises it has created for consumption at home and abroad. This time round, the Chinese official media groups have created smokescreens, like they did in the run-up to the 1962 war, that it was India’s decision last year to bifurcate the border state of Jammu and Kashmir and get rid of special provisions enjoyed by the people of the state that infuriated China, which has its share of border disputes in the region. The construction activities on the road to Daulat Beg Oldie from Durbuk were cited as another ‘provocation’, although it was work-in-progress for close to two decades.

The Indian troops were attacked by PLA soldiers at Patrolling Point 14 on Indian territory a few kilometres from the LAC. Although outnumbered, the Indians fought back vigorously and an officer and many soldiers lost their lives. According to an agreement between senior officers on both Indian and Chinese sides, PLA soldiers were committed to deescalate the tension that had erupted several weeks ago along the LAC, the de facto border between the two countries.

The real intent of Chinese aggression could be vastly different from what that country’s claim is, says Major General M Vinaya Chandran, who retired last year from the Indian Army and was part of the LAC working group. Although India was among the 120 countries that voted in favour of a resolution at the WHO for an independent inquiry into the origins of Covid-19, Chandran believes the PLA is bent upon “teaching India a lesson” for its setback in Doklam, a territory inside Bhutan, India’s staunch military ally. In 2017, China had made unilateral and unprovoked attempts to alter the boundary in Doklam and extend an existing road southward, forcing India to cross the Sikkim border to stop the Chinese troops. China had to withdraw its troops a few months later.

It is often said that India and China never exchanged fire since 1975, but the brutal attack in Galwan Valley is a discomfiting reminder of the situation on the ground. First, it outlines that this peace was always a fragile one. Second, most analysts now agree that the expectation of China mellowing down militarily as it prospered economically is flawed. Third, many of its rivals feel that China is unreliable and its commitments are never final. After 1962, Indian and Chinese troops have exchanged fire only thrice: twice in 1967 in Sikkim; and once in 1975 at Tulung La, Arunachal Pradesh.

On the standoff between India and China over the past few weeks in many parts of eastern Ladakh, Rohan Mukherjee of Yale-NUS College agrees with Luttwak that China has adopted a strategy of controlled escalation. But he feels it is one that has a limit, because the difficulties of combat in that environment make it unlikely that skirmishes of this nature will escalate to all-out combat. “Having said that, the fact that the PLA soldiers were reported to be present at PP-14 in large numbers armed with clubs and rods suggests premeditation, and the very fact that they reneged on the mutual agreement to vacate PP-14 shows that they intended to push the limits of India’s resolve. The Indian Army decided to stand firm, instead of once again seeking a negotiation, and Chinese lives were undoubtedly lost. India’s reaction should suggest to Beijing that this sort of adventurism on the LAC will be less successful going forward.”

He also concurs with Indian Army officers on the primary cause of Chinese deployment. He says that the longer-term change in the local balance of power brought about by infrastructural improvements triggered fears in Beijing of both a greater Indian ability to defend contested territory along the LAC, and in future, to make limited forays into the Aksai Chin region itself.

As regards the official line touted by the state-owned Chinese media, he tells Open, “Analysts such as Ambassador P Stobdan have pointed out that by bringing Ladakhi identity out of the shadow of Jammu & Kashmir, India has created the basis for greater attachment among the local populace to India, a development that would worry China. In the short term, remember that Ladakh includes Aksai Chin even if the latter is de facto under Chinese control. Therefore, the symbolic act of altering Ladakh’s status undoubtedly upset the Chinese. Of course, this does not mean India brought this crisis on itself. India’s domestic sovereignty is its own business.” Certainly, the need of the hour for both sides is to focus less on muscular politics and to tread the path of de-escalation and peace.