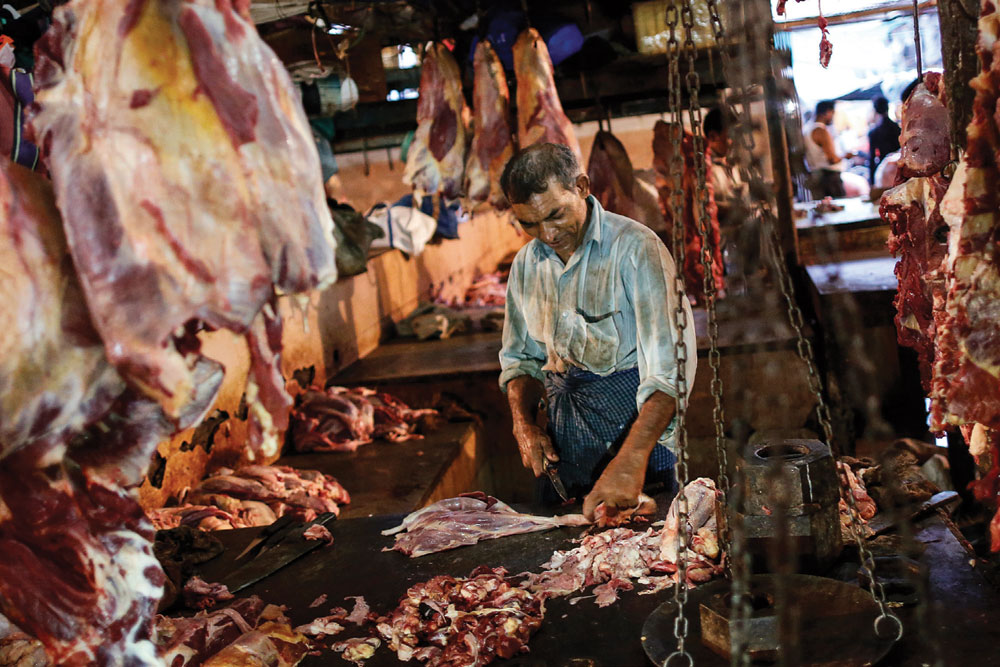 An abattoir in Mumbai (Photo: Reuters)


COVID-19, the pandemic which has destroyed the world as we knew it, emerged from the ‘wet markets’ of Wuhan. The market offered exotic variety, including ‘120 wildlife animals across 75 species’, according to the South China Morning Post. ‘Wet’ markets are huge open-air stalls which sell fresh seafood, meat, fruit and vegetables. Most ‘wet’ markets sell and slaughter live animals on site—a crowd of puppies, pangolins, bats and eels, besides the regular chicken, fish, etc—packed tightly into cages. In China, these are staple food. ‘Wet’ markets also sell wild animals and their meat. The Huanan market at Wuhan, for example, has a wild-animal section where live and slaughtered beavers, snakes, porcupines and baby crocodiles, among other animals, go up for sale.

Why are these markets called ‘wet’? Because there is liquid in these places: live fish splashing in water and melting ice keeping meat cold. But the ‘wet’ also includes the blood and entrails of slaughtered animals. If a buyer chooses a puppy, it is pulled out of the cage and slaughtered in full view of the animals as well as people. Apart from blood, the frightened animals also expel faeces and urine, making the market unclean and unhygienic. China has never ordered the closure of its ‘wet’ markets as they’re an important source of affordable food and livelihood.

In January, China banned the sale and consumption of wild animals as food. The government temporarily closed the Huanan market after it was identified as one of the early sources of Covid-19. Scientists suspect that the virus may have jumped from one species to another, and then on to humans. ‘Wet’ markets, where lots of different species of animals live in tight clusters and inhuman conditions and where humans come into contact with them, are ideal sources for transmission of zoonotic diseases. Animals play an essential role in transmitting zoonotic infections.

On June 11th, Beijing confirmed a Covid-19 case, ending 55 days without reported local transmissions. Since then, the outbreak has grown out of proportion. Beijing had previously reported its last case of Covid-19 transmission in mid-April. The current outbreak began when a man with no history of recent travel tested positive for SARS CoV-2, the virus that causes Covid-19, and was hospitalised the next day. He was infected at the Xinfadi Agricultural Wholesale Market, an enormous 112-hectare market consisting of 2,000 stalls selling meat and seafood, with 10,000 customers and workers visiting daily.

Meanwhile, there is an intense debate going on in Germany on why slaughterhouses have become one of the most common sources of coronavirus outbreaks across the country. Germany’s largest single outbreak of Covid-19 took place at an abattoir in North Rhine-Westphalia. More than 2,000 people contracted Covid-19 in the Gütersloh area and have been linked to the Tönnies slaughterhouse.

Three large slaughterhouses have closed in England and Wales after nearly 250 workers tested positive for the coronavirus, while the Unite union said there were suspected outbreaks at five other sites across the UK. A meat-processing site owned by Asda in West Yorkshire took 48 hours to confirm an outbreak after about 150 workers fell ill with the virus. The Kober plant, which supplies bacon to Asda supermarkets and employs more than 500 people, has closed with a test-and-trace programme under way. The UK’s main supplier of supermarket chicken, 2 Sisters Food Group, closed its Anglesey plant for 14 days after 58 people tested positive. In Wrexham, 38 staff have tested positive at Rowan Foods, which makes food for supermarkets across the UK.


Slaughterhouses have nothing to do with either Muslims or Islam. They are a source of disease and ill health. Have you ever visited a slaughterhouse? The filth and unclean conditions are deadly—faeces, urine and blood flowing all around

The cluster of new cases in meat-processing plants raises concerns about potential pandemics similar to those seen in France and the US, where nearly 25,000 meat and poultry workers were reported to have contracted Covid-19 with at least 91 deaths.

Is there a message here? But surely! When will we learn that slaughterhouses and meat plants are not conducive to good health?

It all started with the Mad Cow Disease or Bovine Spongiform Encephalopathy (BSE) in Britain in the mid-eighties. Subsequent research indicates that the first probable cases of BSE in cows occurred during the 1970s. Two cases of BSE were identified in 1986. Mad cow disease spread like wildfire among British cattle in the mid-1980s, after they were fed the processed animal remains of sheep infected with scrapie, a brain-wasting disease. The outbreak was then amplified and spread throughout the UK’s cattle herds by feeding bovine meat-and-bone meal that contained the remains of other cattle, who developed the disease, to young calves. In other words, by cannibalising the calves. Cattle are herbivores. Feeding them any form of meat—leave alone the remains of their parents—is unhealthy and cruel. The spread to humans resulted in Creutzfeldt-Jakob disease (CJD), a fat degenerative brain disorder, which is transmitted to humans by eating BSE contaminated food.

The Ebola Virus Disease (EVD) was discovered in 1976, the majority of cases occurring in Africa. Ebola first broke out in 2014-2016 in rural Guinea in West Africa, spread to urban areas and crossed borders within weeks, becoming a global epidemic within months. EVD most commonly affects people and non-human primates (such as monkeys, gorillas and chimpanzees). It is caused by a group of viruses in the genus Ebolavirus. The virus is animal-borne, with bats or non-human primates being the most likely source. Animals infected with the virus transmit it to other animals, like apes and monkeys, till it reaches the top primates—humans. Initially, the virus spreads to humans through direct contact with the blood, body fluids and tissues of animals. It then spreads to other people through direct contact with body fluids of a person who is sick with or has died from Ebola. The butchering of bats and handling of raw meat was the source of infection. 11,315 people died from the disease in six countries: Liberia, Guinea, Sierra Leone, Nigeria, the US and Mali.

THE SARS coronavirus (SARS-CoV) was identified in 2003 and is yet another animal-sourced virus from an uncertain animal host—perhaps bats—that spread to other animals (civet cats) and then infected humans in the Guangdong province of southern China in 2002. SARS has reappeared four times—three times from laboratory accidents (Singapore and Chinese Taipei) and once in southern China, where there is evidence of animal-to-human transmission.

In spite of all the evidence of animal-to-human transmission, the Central and state governments in India have not examined whether our slaughterhouses are the sources of this pandemic. No testing has been done in any slaughterhouse or on their workers. I can hear the self-appointed left-liberals condemning this as an act to suppress one community. Please. We all want to save our skins and knowing the source of this steady rise in numbers is essential.

In India, the slaughterhouse was a British invention, to supply beef for their steak to the Englishmen. Robert Clive built the first slaughterhouse in Calcutta in 1760, with the provision that the butchers should be Muslims, thereby ensuring a Hindu-Muslim divide over cow slaughter. The Mughals did not permit cow slaughter until Aurangzeb, who is recorded by historian J Gordon Melton as ordering a cow to be slaughtered within the premises of a Jain temple. There is recorded evidence of a cow slaughter trial presided over by the later Mughal Emperor Farrukhsiyar. For the Mughals, banning beef was a pragmatic decision, to avoid provoking Hindus to rebellion, which would have disrupted agriculture and hindered tax collection. This Mughal policy changed with the advent of the East India Company, whose sole purpose of territorial expansion was to find and export raw materials to industries back home. And beef steak was necessary to keep the Englishman content.

We see repeated cases of diseases jumping from animals to humans, but slaughterhouses and wet markets continue to flourish. This is a result of human greed and stupidity

Slaughterhouses have nothing to do with either Muslims or Islam. They are a source of disease and ill health. Have you ever visited a slaughterhouse? Even if you are not affected by the piteous cries of animals watching others being slaughtered and knowing that their turn will come, the filth and unclean conditions are deadly—faeces, urine and blood flowing all around. How can this be anything but a source of ill health? We know that chickens are pumped with antibiotics, while male chicks are put through shredders even while alive, pelletised and made into chicken feed. They come to the table in various forms of chicken—biryani, butter chicken, murgh masala and so on.

This pandemic is a message from nature, that we have to respect other species. Human exploitation of animals is unpardonable and stupid. We see repeated cases of diseases jumping from animals to humans, but slaughterhouses and wet markets continue to flourish. This is a result of human greed and stupidity. To quote Ian Fleming, “Once is happenstance. Twice is coincidence. Three times is enemy action.” Human beings are their own enemy.