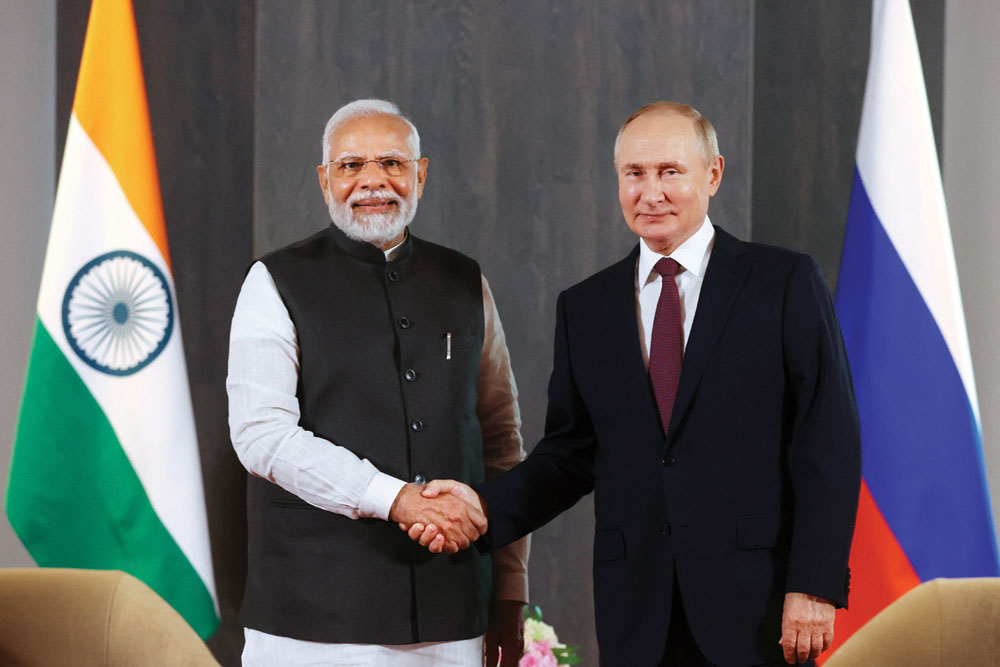 
WHEN PRIME MINISTER Narendra Modi met Russia’s President Vladimir Putin in Samarkand recently, the two leaders discussed a number of issues. But in the mass of topics covered in Modi’s remarks, a handful of words stood out, words that have been welcomed by different leaders.

When Modi said, “I know that today’s era is not of war and we have spoken to you many times on the phone that democ­racy, diplomacy and dialogue are such things that touch the world,” many held it to be some kind of turning point in India’s position on the Ukraine war. In the days that followed, these words were interpreted in the Western press as a “stunning rebuke to Putin”. French President Emmanuel Macron echoed the words when he addressed the UN General Assembly on September 21. He said, “Narendra Modi, the Prime Minister of India, was right when he said the time is not for war. It is not for revenge against the West or for opposing the West against the East. It is the collective time for our sovereign equal states to cope together with challenges we face.”

Modi’s words tapped into deep concerns about Russia’s war and the economic and political chaos it has caused in the world. In India’s periphery—in Sri Lanka, Bangladesh and Pakistan— the economic effects of the war have been devastating. Africa stares at a food crisis as grain shipments from Ukraine stopped suddenly. From oil to fertilisers, commodities are on fire and economies are in trouble. The reception to Modi’s words is understandable.

What matters to India, however, are Russia’s diminishing prospects.

When the war in Ukraine began in late February, it was thought that Russia’s vastly superior war machine would make quick work of Ukraine’s defences and its very existence as a nation-state. Seven months later, Russia is on the back­foot. Putin has now ordered “partial mobilisation” to replenish Russia’s troop numbers. This has followed a Ukrainian counteroffensive in the southeast (Kherson) and northeast (Kharkiv) regions where Russia has lost territory under its control. Ominously, he hinted at the use of “all means”, an implied threat of using nuclear weapons.

It is hard to say which way the war in Ukraine will go, but it is quite clear that Russia has miscalculated politically and militarily. Western countries, especially the risk-averse European ones, were hesitant to supply arms and ammunition to Ukraine. It was only months after the war began when the US finally managed to get its supplies across to Kyiv. Those supplies are showing results.

Overall, however, Russia is in a much weaker economic and political position than it was before the war started. It has been forced to sell oil at a discount and also rely on faltering Chinese support. A weakened Russia has only one winner in Eurasia: China. That is the prospect causing concern in India.

Even after the “special relationship” between India and the Soviet Union ended when the latter imploded, India took care to maintain relations with Russia. By now it is clear that though India’s ties with Western countries, especially the US, are much stronger than others, it has been consistent in keep­ing its friendship with Russia. When the issue of acquiring the S-400 Triumf missile defence system arose, India remained firm on the deal with Russia even after the US mounted pressure on it to abandon that deal. But that was before the war in Ukraine. Since then, India has gone ahead with buying Russian oil. At one time, Russia supplied just 1 per cent of India’s crude oil sup­plies. This figure has gone up to 12 per cent now, leading many West­ern media outlets to say that India is helping Russia in its war effort. India has rebuffed these charges with a mild degree of irritation. This is the other side of the equation with the West—while not openly dwelled on—that worries India.

Modi’s remarks are best inter­preted against this background. A weak Russia that is reliant on China for support—however weak and calculating that may be—is not in India’s interest. As matters stand now, Russia is in the grip of a “sunk cost fallacy”: it will throw more resources in its war effort that was not planned properly to begin with. Its original goal is now ever further from being realised.

India depends on Russia for military supplies as well as raw materials and commodities. These are, however, only one part of the overall package. Russia’s political support to India on a host of issues has remained constant and unwavering. The only issue on which it has been cautious is the India-China conflict where Russia has not gone beyond homoeopathic doses of concern.

While India’s economy is growing (it surpassed the British economy earlier this year), it remains a middling power for all practical purposes. Its ability to project military power is limited as is its military-industrial base. It is in the nature of such powers that they are prone to risk-minimising calculations when they build relations with other countries and conduct foreign policy. In Jawaharlal Nehru’s time, this risk-averse behaviour was dressed up in ideological terms as “non-alignment”. Today, that ideological baggage has been discarded but the preference for risk-averse choices remains strong. At times, this goes so far as to not ‘offend’ even enemies like China: there is a very strong group of current and former diplomats, thinktankers and ‘intellectu­als’ who habitually keep making somewhat doltish pro-China noises. It took decades for India to even move in the direction of forging stronger political and strategic ties with the US. That, too, is a product of risk-averse behaviour.

The same attitude also informs India’s continued efforts to maintain and upkeep ties with Russia. Until now, India has taken great care not to be seen as criticising Russia. This is not due to some ideological affinity between the two countries as many Western commentators suggest. Modi’s remarks and Putin’s careful response that “I know your position on the con­flict in Ukraine, your concerns that you constantly express,” suggest that both countries understand what is at stake.

The best outcome for India would be if the war in Ukraine ended quickly. But ensuring that is not in India’s hands. All that it can do is gently tell Russia and its leader about what is at stake. Russia, in any case, is a country with a very long history of war and diplomacy and understands the choices available to it. But as matters stand now, Moscow’s miscalculations are for everyone to see. Its security concerns on its northern flank (the Baltic region) and its southern periphery (Ukraine and Georgia) are well-known. But such is the nature of international relations that even when concerns of countries are known to each other, they do not stop from making the most of what they can. Something similar is at work in Ukraine and Russia. India is geographically distant from that theatre but the consequences of the war have affected it adversely in many ways. It can bear the cost for now but the long-term cost is yet to be reckoned with. Modi’s words convey those concerns.