Who Will Win the Mind Game?

As BJP hopes to retain power through a tireless campaign, the opposition counts on ethnic and religious arithmetic 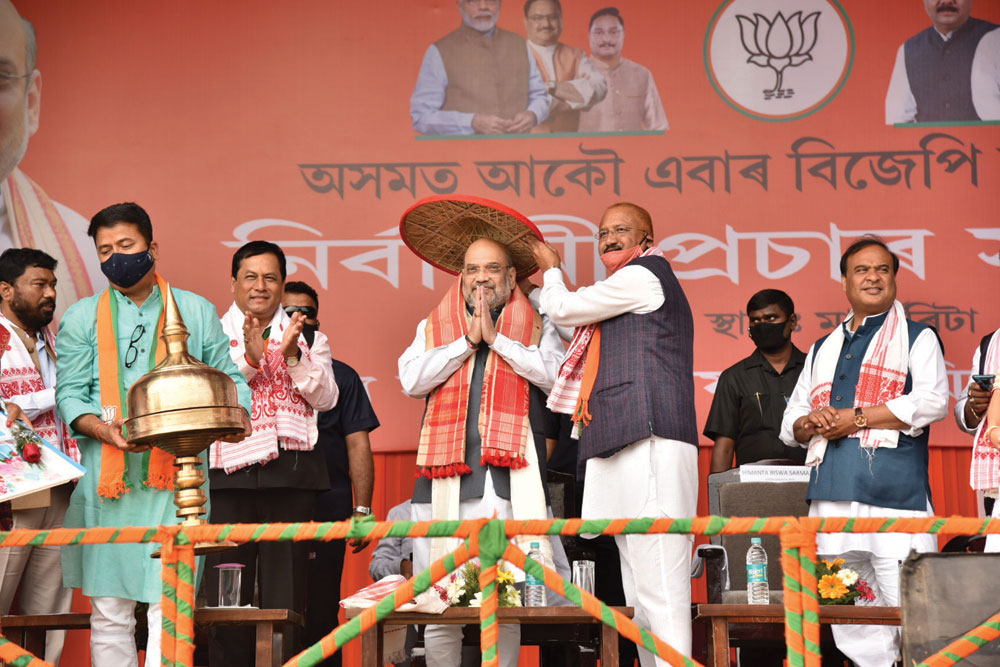 
FOR A STATE that receives heavy seasonal rainfall, it is showering mind games this poll season in Assam where the ruling Bharatiya Janata Party (BJP) anticipates returning to power and the Congress-led grand alliance hopes to upset pollsters. Power of persuasion, psychological tactics around social identity and fear are on full display in the three-phased Assembly elections in the Northeastern state that began on March 27th and will end on April 6th.

In an election that has seen a realignment of forces compared with the one in 2016, both BJP and its rival front have left nothing to chance and are using every weapon in their electoral armoury to shock, embarrass and deftly one-up the other. As opposed to the last time when the Congress faced anti-incumbency and defections, this time, it has aligned with the pro-Muslim All-India United Democratic Front (AIUDF) with the common goal of taking on BJP.

In an instance of shock and awe, on March 28th, a day after the first phase of polls got over, BJP ran a banner advertisement in the state’s main dailies proclaiming that it was assured of a certain victory in all the 47 constituencies that had just gone to the polls. Congress, which knew very well that this could have a bearing on the voting choices of people over the remaining two crucial phases, lost no time in lodging a complaint with the Election Commission. It alleged that the advertisement was meant to ‘influence and deceive’ the electorate. As expected, social media was rife with diverse views on BJP’s strategies and ruses.

Clearly, this is seen as a masterstroke of political spin on the part of BJP that perhaps bordered on the desperate, especially since it is likely to be at a natural disadvantage of having been in power for five years. Again, the next phases would cover almost two-thirds of the state’s voters and, therefore, pulling in as many votes from those would be critical to an eventual win.

The poll scene has changed drastically in five years. In 2016, Congress and allies had to face a massive anti-incumbency sentiment after being in power for three straight terms under Tarun Gogoi, who was at the helm from 2001 to 2016. Besides, several top leaders from the Asom Gana Parishad (AGP) and Congress joined BJP ahead of the polls. BJP also managed to stitch up an alliance with the Bodoland People’s Front (BPF). Five years later, though, BJP is up against two coalitions: one between regional parties Assam Jatiya Parishad (AJP) and the Raijor Dal which had spearheaded the anti-Citizenship (Amendment) Act, or anti-CAA, agitation; and the other one, an eight-party, Congress-led tie-up that, besides AIUDF, includes BJP’s former partner BPF. Meanwhile, Congress has come under sharp attack from BJP for securing support from the Badruddin Ajmal-led AIUDF to keep itself politically active in the state. BJP, for its part, hopes votes get divided to its advantage.


Fortunately for BJP, the Citizenship (Amendment) Act has not emerged as a major issue in this election. NDA is also showcasing its record on governance, development and welfare schemes

Regardless, the ruling National Democratic Alliance (NDA) has battened down the hatches by organising as many rallies of its honchos as possible. As a result, Prime Minister Narendra Modi, Home Minister Amit Shah and other senior BJP leaders have travelled extensively in the state delivering commitments on the burning issues and targeting rivals. BJP also claimed that the NDA’s tally would rise to 100 from 86 in 2016 in the 126-member Assembly where the winning combine requires 64 seats to come to power.

Reports from some areas of the 47 constituencies in eastern Assam suggest that BJP will likely emerge as the single largest party. The key to its returning to power lies in its performance here that is home to people belonging to a range of communities: the Assamese, Mising, tea tribes and Bengali Hindu communities. It is no secret that ethnic equations and caste arithmetic in the other regions of the state will offer opposition parties an edge. Pundits that I spoke to are of the view that a fierce contest took place in the first phase of polling in at least 15 constituencies where Congress has a bright chance of not only retaining its earlier seats but also wresting a few from BJP. They contend that Amguri, Teok, Titabor, Golaghat, Naharkatiya, Lakhimpur, Bihpuria and Doomdooma are a few constituencies where the outcome is unpredictable.

Fortunately for NDA, the CAA has not emerged as a major issue in the polls, notwithstanding the fact that a vast region in the state’s eastern districts and Guwahati are home mostly to Assamese communities that had protested against the new law which grants citizenship to a section of non-Muslims from the neighbouring countries of Pakistan, Afghanistan and Bangladesh by extending the cut-off year to December 31st, 2014. The law not only nullifies the National Register of Citizens (NRC) in the state but also the historic Assam Accord which had marked March 24th, 1971 as the cut-off date for determining citizenship. Moreover, BJP’s promise of protecting the ‘jati, mati and bheti’ in Assam sounds hollow thanks to this new law.

The alliance of AJP and Raijor Dal was formed with the declaration of battering ‘communal’ parties like BJP and AIUDF. High hopes were raised when these parties were formed but analysts have cast doubts whether they would be able to really make a decisive impact in the Assembly polls. Still, they are expected to cut into the vote shares of BJP, AGP and Congress—something that could influence the final outcome. The rallies organised by these parties have attracted huge crowds not only in the Assamese heartland but also at some locations in the western districts where Bengal-origin Muslims are crucial voters.

The Congress coalition, too, has made serious efforts to capitalise on anti-CAA sentiments in the state. Besides, it has raised other issues, such as price rise, unemployment and wages of tea garden workers, and so on. Congress expects to woo voters with five poll guarantees: generating five lakh jobs, providing a monthly income support of Rs 2,000 to all housewives, increasing the daily wage of tea garden workers to Rs 365, granting 200 units of free electricity to every household, and passing a resolution in the Assembly against implementation of the CAA in Assam. Besides, the alliance envisages preventing the split of votes in Muslim-dominated constituencies in the state thanks to its truck with AIUDF. Both parties had secured a total of 40 seats in the previous polls. Their shortcomings in the Bodoland Territorial Region (BTR) are also sought to be overcome following the decision by BPF to join the alliance, according to UPA leaders. BPF had won all the 12 seats in the autonomous region in 2016.

Faced with myriad challenges and to offset any likely losses, BJP and its allies are banking heavily on identity politics. Hindus account for 65 per cent and the Muslims 35 per cent in the state. Which explains why Assam’s BJP leader and Finance Minister Himanta Biswa Sarma has been dwelling at length on the 65 versus 35 standoff in his speeches. NDA also chose to target AIUDF and its president Badruddin Ajmal for attack, calling them protectors of Bangladeshi infiltrators. Chief Minister Sarbananda Sonowal recently described AIUDF as an “enemy” of the country. BJP expects such rhetoric to pay off.

BJP and its partners are also showcasing their governance record in this election. The ruling alliance has implemented several direct and indirect cash benefit schemes, such as Arunodoi and Chah Bagisa Dhan Puraskar Mela, targeting different sections of the populace since January. Almost a dozen projects with an estimated budget of more than Rs 6,000 crore were launched in which 90 lakh people were beneficiaries. Development in the past five years is being underscored repeatedly with the construction and repair of roads being cited as one of the major achievements of the government. The NDA government has also approved an increase in the daily wage of tea garden workers by Rs 50 (which has not been implemented so far following a case lodged by the Indian Tea Association and 17 tea companies in Guwahati High Court).

BJP definitely has its pluses. Its ‘spadework’ for the Assembly polls had been completed months in advance, its leaders aver. There are also reports of strategic door-to-door campaigns.

The Rashtriya Swayamsevak Sangh (RSS), which has been active in the state for decades, especially among the most disadvantaged communities, is also in full swing to assist BJP’s no-holds-barred campaign. RSS affiliates, such as Vanvasi Kalyan Ashram and Seva Bharti, have been active in the education and healthcare sectors in the state for a long time. BJP certainly banks on RSS’ last-mile connectivity in its poll blitzkrieg in several Assembly seats. More than anything, as the dust and grime of electioneering continue to kick up a storm, the polls here are being fought with an unbending resolve and utmost aggression.