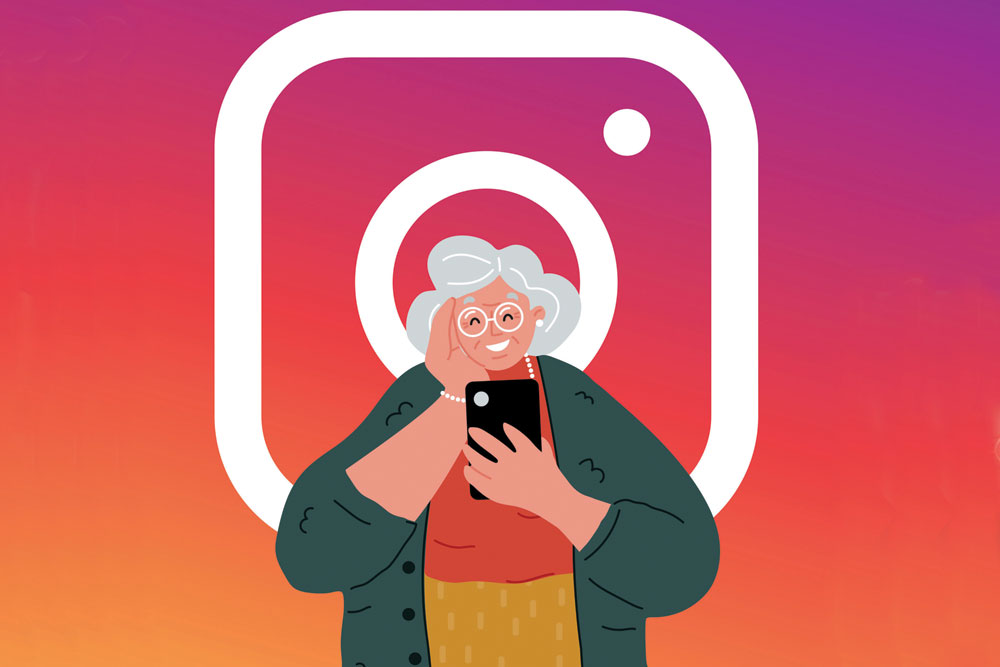 
FOR SEVERAL YEARS, when Jyothi Thomas conducted her soft skills corporate training programmes for IT employees, she could not help but notice the technological gulf that was building between her and the youth. The 62-year-old from Chennai kept abreast of technology, she says, securing the help of younger friends and students. But as the technological jumps picked up speed, with our mode of going online and its many tools increasingly moving from computers to phones, to now being more and more centred round multiple mobile phone apps, she was acutely aware of just how difficult it was getting.

A few years earlier, her daughter, now based in Canada, had set up an Instagram account for Thomas and showed her how it worked. Thomas had instantly loved the experience, she says, but with her daughter now away, she could not get it to work. “I was mad about it. But I was completely lost,” she says. Thomas could not figure out how hashtags worked, or why the photos she mistakenly posted in her messages were not showing up in her account feed.

So last year, as the pandemic raged and the world outside her window shuttered down, Thomas decided she must take matters into her own hands. She went online to a Zoom meeting filled with silver-haired and bespectacled faces for the first of many classes on Instagram for the elderly.

“You should see me now,” she says. “I change my bio every day. I’m changing (the photos on) my account every day. My daughter calls me every few days and says, ‘Oh my god mama, what are you up to’,” she says. “What can I do? I’m totally, totally, addicted.”

India, as the conventional marketing wisdom goes, is a country of the youth. But the country also has a significant elderly population that is also growing rapidly. According to Census 2011, an estimated 104 million people aged above 60 live in India. By 2050, it is estimated that nearly 20 per cent of all Indians will belong to this age category. The elderly are living longer and more fulfilling lives, many continue to work long past their retirement age and, just like their younger countrymen, have disposable income they are willing to spend on their comforts and wants.

The technological leaps of the last few years have meant that senior citizens are increasingly left behind. According to a 2017 survey carried out by the NGO Agewell Foundation, about 86 per cent of seniors in the Delhi-NCR area were found to be digitally illiterate (elderly men making up 76.5 per cent, and elderly women worse at 95 per cent).

The pandemic in many ways has exacerbated the situation. The world has moved further online, with everything from scheduling Covid-19 vaccination and having essentials delivered to all forms of social and cultural activities that keep one engaged moving online. But many senior citizens are now playing catch-up. They are, like Thomas, joining classes to work out everything from social media to digital payments. They are moving their kitty parties and spiritual chanting sessions online. According to a spokesperson of the fitness app Fittr, several elderly people are even coming online for their fitness needs. There has also been a small explosion of the ‘grandfluencers’, or elderly social-media influencers, from the Dancing Dadi (the elderly Kathak dancer Ravi Bala Sharma who has taken Instagram by storm), the cute 70-plus couple that goes by the name Mr and Mrs Verma on Instagram, to Poonam Sapra’s hilarious “motherwithsign” account, where on a small signboard, the bespectacled, often sweater-clad lady delivers messages from motherly concern (“Wear enough clothes, you’ll catch a cold”) to motherly sarcasm (“Try and spend some time with your parents too. They’re good people”). Many of these influencers have followers upwards of 1.50 lakh, are sought after by brands to promote their products, and often even appear on popular TV programmes, such as when, a few months ago, the couple Mr and Mrs Verma was invited on Indian Idol. 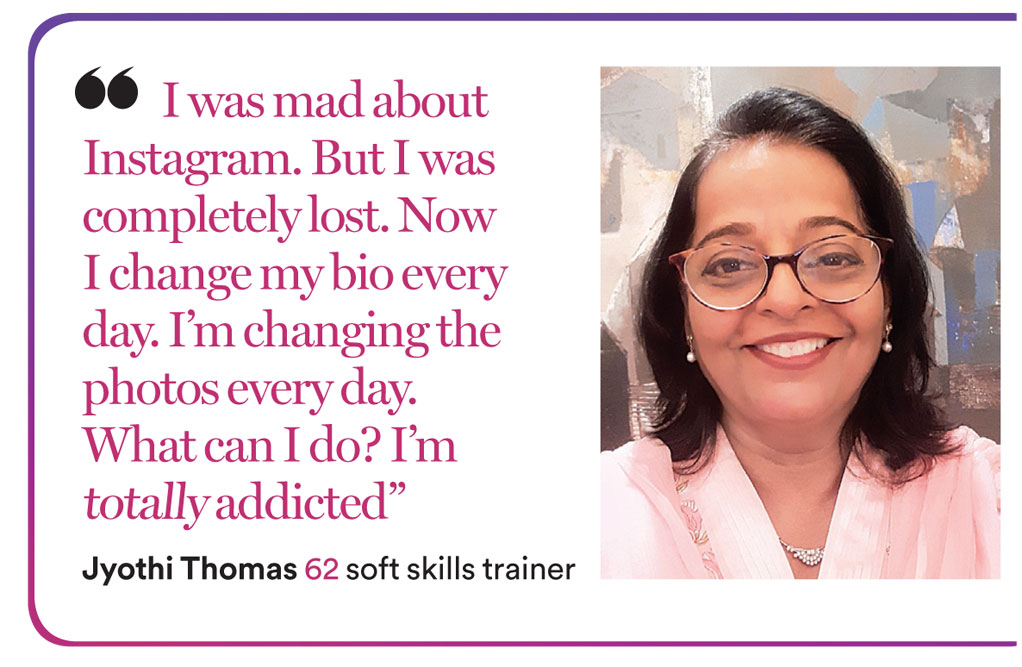 “The elderly in India have been adopting digital platforms at an accelerated pace. What started as a way to stay in touch with family and children is slowly becoming a new way of life—from transactions to entertainment,” says Mahima Chugh, Partner, McKinsey & Company. “The base of elderly users in the total population is currently low compared to their Asian peers. For instance, India has a lower percentage of seniors (10 per cent in 2020) compared to other parts of Asia (30 per cent for Advanced Asia, 17 per cent for China in 2020). That said, across digital platforms the senior age group is amongst the fastest growing cohorts witnessing strong growth on these platforms.”

According to Chugh, several factors had contributed to this shift even before the pandemic hit, from demographic shifts, such as reducing family size (5.5 to 4.5 persons from 1999 to 2015), increasing number of nuclear households, and children moving to other locations for studies or work, and the elderly thus turning to digital platforms as a means of staying in touch. “They were also the most vulnerable, especially in the first Covid wave, and were encouraged by doctors, families and children to stay indoors—almost forcing them to replace many of their physical visits by digital ones—whether for accessing financial services or buying daily essentials. For example, according to a 2020 McKinsey Consumer Sentiment Survey, 66 per cent of users aged 55-plus said they had started using online services for grocery delivery—which went up to 70 per cent in February 2021; 57 per cent saying they would continue to use such service and 28 per cent said they would increase adoption. Similarly, in November 2020, 40 per cent of 55-plus surveyed users said they had begun to participate in online personal training/fitness programmes, with 50 per cent saying they would continue and 20 per cent saying they would increase its use even after the pandemic ended. By February 2021, this had gone up to 50 per cent of this same demographic who had begun to use online/personal fitness training since the pandemic and 66 per cent who said they would continue,” she says.

For a long time, Senguttuvan S, a popular food blogger on Instagram has resisted monetising his account. “I don’t really need the money,” the 72-year-old says. But the requests from brands to feature their products have become incessant, he says, especially after he was invited to the Tamil version of MasterChef on TV. And with many having fewer follower counts than him promoting brands online, he may rethink his previous disinclination towards promotions.

Unlike many in his age category, Senguttuvan, who lives in Chennai, did not face much difficulty navigating the online world. A former Godrej executive, who always kept abreast of whatever new technological development was taking place, after his retirement some 12 years ago, he began to spend his time pursuing his hobbies around photography and bird and butterfly watching. “I spend my time with the young. I don’t enjoy spending time with people in my age group because they mostly only talk about problems and health issues and it gets very negative,” he says.

About five years ago, while visiting his daughter in the US, he began cooking for the first time. Soon, his Instagram account, also recently discovered, was filled with photographs of his newest passion. When the pandemic first spread, and Senguttuvan had to limit his visits outside for bird and butterfly-spotting, he spent even more time on his Instagram account. “Now I do only four hours online every day. Otherwise it gets addictive,” he says.

According to Shreya Bajaj who, along with her sister Surbhi Bajaj, last year started Easy Hai—a venture that, through online workshops, helps senior citizens navigate the digital world—the pandemic exacerbated the issue of digitally challenged senior citizens, and in many cases, pushed these seniors to go online. 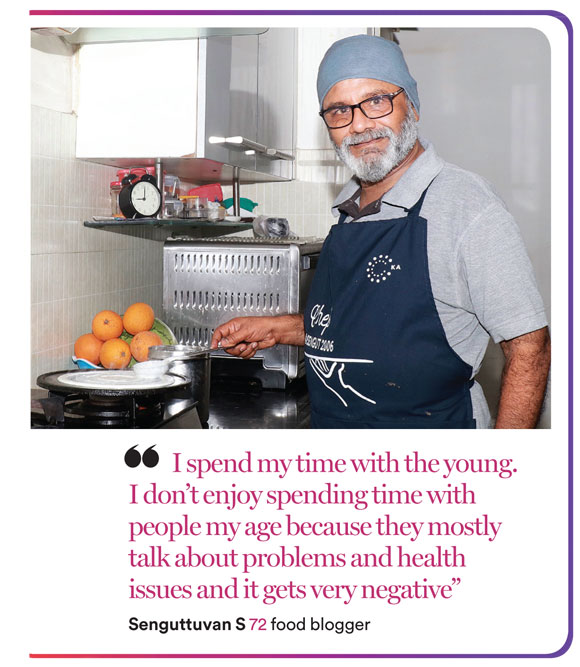 “Seniors have struggled through the pandemic. How to use Aarogya Setu, how to turn on Bluetooth and GPS for this app, how to pay bills online or order groceries. In some cases, they are aware of how to do these things, but there are fears of bank accounts getting compromised or not wanting strangers or deliverymen from knowing their addresses. It’s like doing a class for two-year-olds. But I tell them there are no wrong questions. There is nothing negative about it. It’s like learning a new language,” says Bajaj.

They have so far conducted workshops for over 8,000 senior citizens, many of these individuals in their 80s. These classes range from helping the elderly understand and use everyday apps and online tools to helping them take better photos and videos for social media and then learning how those can be edited, and to even more advanced courses, such as tutorials on how to use tools such as Excel and PowerPoint or workshops on social media for small businesses catering to elderly entrepreneurs like homechefs. “It’s great to see but many of the elderly have made that transition online. Like managing to take their yoga, or (Bhagwat) Gita-reading classes or kitty parties online,” Bajaj says.

Sapna Ghatiwala, a Mumbai-based jewellery designer, was one such individual. Although only 51, she had found navigating the online world difficult, and when the pandemic spread and her many yoga, pranayam and spiritual classes came to a halt overnight, she worried how she would cope. But Ghatiwala turned to online tutorials, learning how to edit photos and videos for her social media accounts of her jewellery brand while also gathering the confidence to spend more time online, and even, eventually, joining the classes she so missed online. “I’ve boosted my confidence now. I’ve learnt there is so much more, like how Zoom has so many more features than I knew. Now when clients call, I get them to do it over Zoom instead,” she says.