The Redundancy of an Agitation 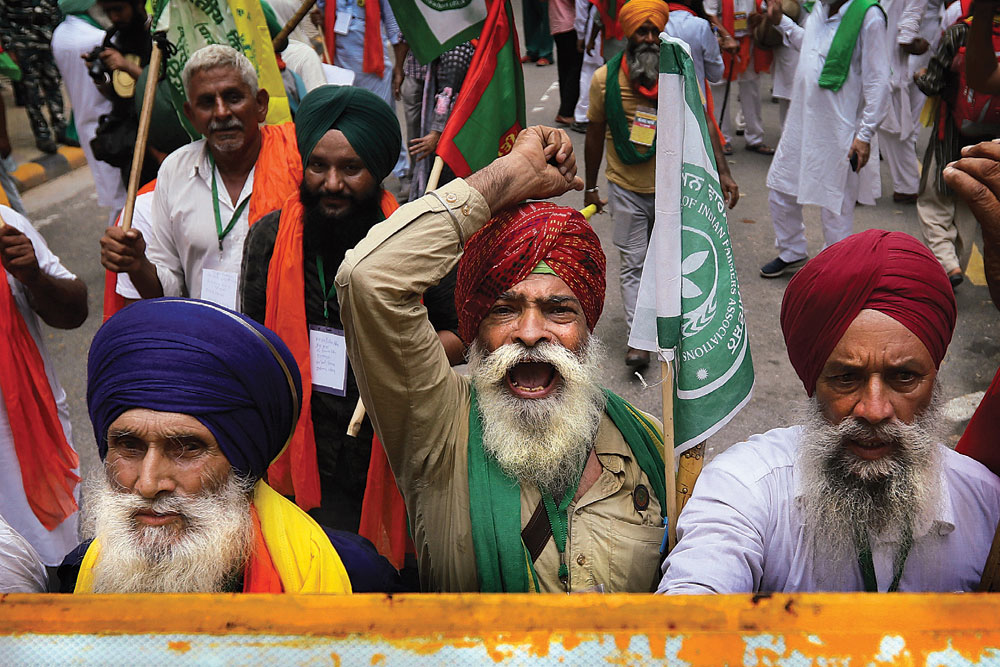 
ON THE EVE of the Monsoon Session of Parliament, a group of protesting farmers declared they would camp at Delhi’s favourite activist spot, Jantar Mantar. The plan was simple: further corner the Government that was facing public ire on the Covid-19 issue. The plan went swimmingly to begin with as a group of farmers decided to launch a “farmers’ parliament”. The trademark photo-ops—the community meals (langar), the women at the forefront, the gathering of celebrities there for a “cause”, and more—were available in plenty and pre-designed to attract media attention.

Then, suddenly, the farmers disappeared from the headlines a week after the Parliament session began. Competing stories like Pegasus edged out the farmers. That, at least, is the narrative from the sympathetic sections among activists, intellectuals and journalists favourably disposed towards the farmers.

The trouble is, this “narrative” does not square with reality. Garnering headlines is probably the easiest game for any agitation in India these days; getting political traction and favourable outcomes is an entirely different matter. From that perspective, the farmers lost the plot a while ago.

After eight months of agitation, one can discern several turning points and missteps by the farmers. While public memory is fixed on the events of January 26th when a mixed crowd of farmers and Khalistani sympathisers ran riot at Red Fort, there was another, relatively unobserved, turning point. This is not an easily datable event.

Much before December 2020 and early January—during the endless rounds of ‘discussions’ between the two sides—the Government concluded that it needed a long-term strategy to counter the agitation. This could not be a law-and-order approach as that would inflame entire sections of the population. Farmers are one class who get instant sympathy even from people living in urban areas. The strategy had to be based on weaning away a section of the farmers themselves.

The simplest tool available for this purpose was to purchase a much higher fraction of farmers’ produce. Data available now shows that for rice in the kharif marketing season of 2020-21, the Government purchased roughly 25 per cent more rice from farmers in Punjab; 18 per cent more from those in Uttar Pradesh (UP) and
43 per cent more from those in Madhya Pradesh. The same story was repeated in the rabi marketing season for 2021-22. In Punjab, roughly 4 per cent more wheat was purchased. This increase may seem puny but it should be compared with the already high base of wheat purchases from Punjab. In the rabi season 2020-21, this figure was already 127.14 lakh metric tonnes. These increases are evident across north India, the catchment area of the protest. The composition of the higher purchases, especially rice, is interesting. Rice is one crop that gives the maximum uncertainty to an ordinary farmer in north India. In terms of uncertainty over price and marketing and the danger of unseasonal rains damaging the crop, rice is a headache. It is with respect to this crop that the Government has devoted maximum care.

The results are visible now. While it is hard to estimate the number of farmers on protest on the periphery of Delhi—there has never been an unbiased estimate—these steps have visibly reduced the thick lines of tractors that could be seen in the first four to five months of the protest. Farmers are a very astute class of economic agents who can figure their interest clearly. While the Government went about its task silently, the message was not lost: why bother with the protest when the Government is buying more? In contrast, the leaders of the agitation—and their intellectual backers—continued harping on the claim that the Government’s extra purchases were a ruse for a later withdrawal from the sector and a “corporate takeover”. This message has not percolated down.

As the support base of the protest has tended to narrow, the political rhetoric and behaviour of the so-called farmers’ leaders have become shrill. Individuals like Rakesh Tikait—well-known for their opportunist acumen—have concluded that this is the time to strike a political bargain with opposition leaders. The calculation is clear: strike a deal before the momentum weakens further. Similarly, individuals like Gurnam Singh Charuni of Haryana—who heads his own Bharatiya Kisan Union (BKU) outfit—considered this to be the right time to launch a political career. Charuni’s plan was shot down by the Samyukt Kisan Morcha (SKM) leaders (they have their own political plans). But the message was clear: make the best of the opportunity while it lasts. Back in February, a key SKM activist and manager had told Open that sooner or later, “the political ambitions of these failed politicians will become manifest.” They were prophetic words.

But things have not worked as planned. The national opposition of parties has a shrewd estimate of the farmers’ ability to get the requisite numbers when push comes to shove. The agitation is a useful talking point, headline grabbing device and perhaps, nit-pick the Government in Parliament, but no more. The farmers are no longer the political force they seemed to be early this year.

The events in Parliament make it clear that the farmers are just another card for the opposition to use when required; they are not the device that can be used to corner the Bharatiya Janata Party (BJP) electorally. The benefits that could be made from the agitation have already been made in Punjab where BJP is politically weak to the point of being non-existent. Congress, that stands to gain the most, does not prod the farmers to march to Delhi anymore. The Shiromani Akali Dal (SAD)—whose leader Harsimrat Kaur Badal was seen saying that the Government did not bother to note that 500 farmers had died in the protest—is probably one party that has lost the most during the protest. It reacted late to the agitation and by the time it walked out of the National Democratic Alliance (NDA), the Punjab Congress was already well on its way to reap benefits from the protest. The passage of laws in the Punjab Assembly that allegedly ‘stop’ the Central laws from taking effect, cemented those gains.

The agitation has now taken a law-and-order form in most places. This is most evident in Haryana where bands of farmers stop government ministers at will in districts. They have now threatened that ministers will not be allowed to unfurl the national flag in various districts on August 15th. This lawlessness is now distinct from the original agitation (where participation of farmers from Haryana was low to begin with) and is linked to caste politics in the state. In western UP, there are sporadic protests, including flash blockades of the Delhi border, but nothing more. Tikait, who is eyeing a political career, is not present at these sites.

The Government’s strategy was based on attrition—weakening the support for agitation—while that of the farmers’ was based on some notion of political blitzkrieg. In this, the farmers were advised by urban agitators who have little idea of how mass politics works. The Government’s generous offer—of suspending the laws for 18 months—was dismissed without any consideration, another indicator of the misplaced confidence of these advisors. It would have been much better to accept that offer as a starting point to get a better deal. But the idea was to show the Government its place. All that has faded now. The agitation won’t end just like that: it will linger as the individual BKU outfits have their own support bases. But the idea of a unified front of farmers has not worked. The plan was for a pan-India agitation; in reality, even north India did not rally behind the agitators.