The Message in a Reshuffle 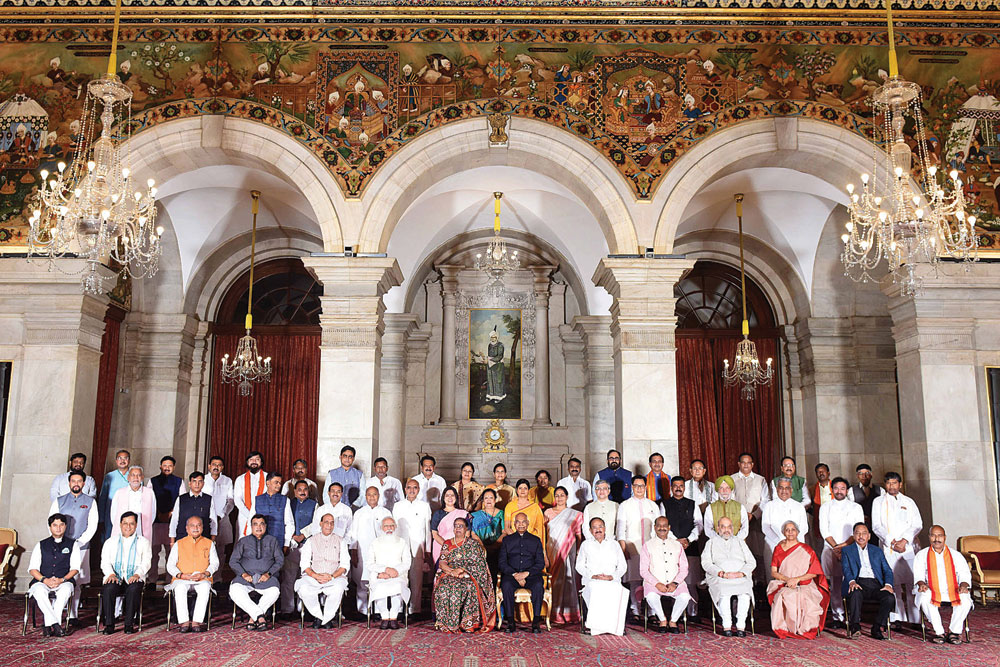 
BACK IN AUGUST 1990, three months before his Government collapsed, then Prime Minister Vishwanath Pratap Singh dusted off a decade-old report on affirmative action for Other Backward Classes (OBCs) and opened the gates for the politics of affirmative action, or mandal politics, an axis around which Indian politics has revolved ever since. During those months of political singularity, another event—the rath yatra of Bharatiya Janata Party (BJP) leader LK Advani—created the second axis of contemporary politics: kamandal.

Since then, it has been an article of faith among analysts and non-BJP political parties that the two poles are distinct. One is acceptable and the other is not; one represents democratisation of the Indian polity and the other the continued privilege of upper castes. Other binaries have also been ascribed to the two poles held to be as distinct as chalk and cheese.

The reality, as always, is more prosaic. VP Singh, for all his concern with India’s downtrodden, never took the initiative to share actual political power with the underprivileged and the unrepresented. His Council of Ministers and those of his successors signalled the very privilege that he said he was ending. In contrast, BJP was always held to be a party of privilege; its protestations were simply laughed off.

On July 7th, those two poles of politics—mandal and kamandal—dissolved into one another in the drastic overhaul of his Council of Ministers by Prime Minister Narendra Modi. Of the 77 ministers in the revamped Council of Ministers, 47 are from Dalit, Adivasi and OBC communities—or, 61 per cent of the ministers are from underprivileged communities. The logic of mandal versus kamandal has been undone for the first time at the highest level of political power in India. For parties in the Hindi heartland, only one axis—mandal—was ever useful. That ran into its own contradictions. In Uttar Pradesh, the Samajwadi Party (SP)—the alleged torchbearer of OBC empowerment—began as a wider coalition of OBCs but ultimately shrunk to only Yadavs and Muslims. The Bahujan Samaj Party (BSP) witnessed a similar regression and, in Bihar, the Janata Dal (United)—or JD(U)—was even more spectacularly narrow at its core, notwithstanding its long innings in power.

In recent months, SP was seen taking steps to rope in small parties. Viewed narrowly, BJP has pre-empted any such consolidation of OBCs and Dalits. As a second order move, even if Hindi heartland parties try to wean away these groups from BJP’s orbit, these subaltern groups will demand a higher price. It is unlikely that single-family parties will be in a position to pay that price. This is, of course, still an open field but BJP has clearly stolen a march and the so-called mandal parties now face tough choices.

For BJP, the organic formula of power is different: it cannot be a mere balancing of the two distinct poles as much as their dissolution in the solvent of nationalism. The balancing exercise has been tried by parties before but such is the nature of Indian politics that the juggling act is bound to fail at some point into incoherence. BJP has bypassed those magic tricks.

Cynics always say that all such exercises are geared towards political ends. It is a mischaracterisation to describe such calculations as cynical: the quest and attainment of political power lies at the heart of any representative system. The Cabinet reshuffle marks the deepening of the process that began with the first Narendra Modi ministry in 2014. Even at that stage, critics said the “sprinkling” of OBCs and Dalits was meant for “perception management” purposes and did not reflect the actual distribution of power.

If one slices the composition of the new ministry from any perspective—region, caste composition, culling of inefficient ministers and electoral calculation—it is hard to find a precisely crafted ministry.

The entire set of political calculations is likely to elude analysts immediately. But one part of it is pretty clear: the Assembly election in Uttar Pradesh early next year. In the new ministry there are seven ministers from all the different parts of the state. In doing that and keeping in mind the social and political equations, BJP has pre-empted parties like SP that were trying to bring parties and groups representing numerically small castes into their fold. The induction of SP Singh Baghel—who represents the Pal community—and the second tour of Anupriya Patel of the Apna Dal signal that calculation. The same exercise has been repeated for other states as well. West Bengal, another important state for BJP, has seen key representatives from groups that are electorally important inducted in the ministry.

Another feature of the ministerial reshuffle has been the ruthless culling of ministers who did not perform well. Of the 12 ministers—from the Cabinet and from among Ministers of State—Harsh Vardhan, the health minister, stands out. The second catastrophic Covid-19 wave witnessed widespread reports of oxygen shortages as well as those of critical medical supplies. The minister was seen as wanting in managing to do what was necessary. His controversial statements in the middle of the wave added to public anger against him. The fact that some of the ministers—Prakash Javadekar and Ravi Shankar Prasad—were political heavyweights demonstrates that no one has political immunity in the Modi ministry.

There are three more years left before the General Election and the induction of new ministers with professional backgrounds and experience in the civil service (seven are former IAS officers) indicates that governance is a priority area for Modi. It is no secret that India has seen economic turbulence for a while now. While this affects all Indians, it has the potential to harm the country’s growth prospects unless efforts to fix governance issues are redoubled. In this, the prime minister has taken a bold step by handing key ministries like railways, communications, information technology and health to new faces at a time when India faces serious challenges in those areas.

This is not about the ability of an individual prime minister to take bold decisions or risks but about the wider appreciation of events. In most prime ministerial teams, the period between the second and the third year represents an inflection point: whatever could have been done in terms of governance ideas gets exhausted by then. After that, a drift sets in and ministerial reshuffles, even when they are described in terms of imparting efficiency, have more to do with political calculations. Historical experience shows this is self-defeating unless governance and political calculations are placed on an even keel. The Cabinet reshuffle demonstrates that both elements have been kept in mind. For any other party, 2024 would be distant; for BJP, every election is close-by. That is one of the key takes of the changes effected on July 7th.