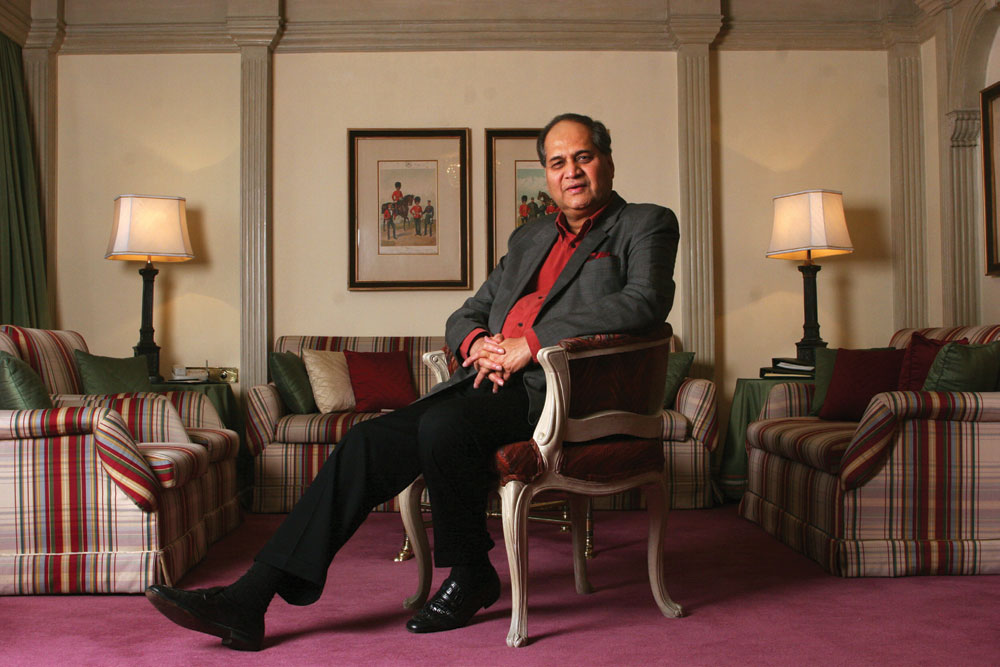 
THE LIFE OF Rahul Bajaj, who passed away at the age of 83, both parallels and is interwoven to the journey of independent India, from his antecedents to his own experiences to the legacy that he leaves behind. He came from blue blood, but it was one that had toiled for it, and not just in the commercial sphere. The family, with roots in Rajasthan, had a trading background but Jamnalal Bajaj, his grandfather, who turned it into a business group, was an important part of the freedom movement. He spent time in jail, was a follower of Gandhi, helming many of the issues that the Mahatma preached, from eradication of untouchability to promotion of Khadi to non-cooperation with the British. Rahul Bajaj’s father Kamalnayan took charge after the passing away of Jamnalal Bajaj, steered the group through the upheaval of Independence while continuing to maintain links with Congress, even being a parliamentarian for them. Politics would never be very far away from Bajaj. The name Rahul was given by Jawaharlal Nehru, as he was wont to say.

Rahul Bajaj went to Harvard Business School and came back to join the family business in his mid-20s. It was at the age of 30 when he finally got control of the vehicle manufacturing unit that he came on his own. Bajaj Auto’s eventual pre-eminence in two-wheelers was entirely his doing. The Chetak was the diamond in the crown. You couldn’t have a decent marriage in that era without the scooter as a part of the dowry. Later in interviews, he would reminisce about the 10-year waiting period for an Indian to get his hands on one. And he put the blame for this squarely on the economic policies of a country where only the Government would decide how much each manufacturer could make. He wanted to churn out more scooters because of the demand, but was blocked at every step by the same party that his family had once been integral to. This might have something to do with his father backing the wrong team when Indira Gandhi split Congress and took over leadership. She didn’t forget. Bajaj, who claims to never have given a rupee in bribe for the all-powerful licences that businessmen needed then, manufactured as much as he was allowed, but the scooters themselves became more and more coveted. You could buy one if you were lucky enough to get it, and the next day sell for double the price.

It was when the Janata Party came to power after the Emergency that he finally was allowed to expand manufacturing capacity. But soon, by the mid-1980s, the signs became increasingly clear that what was once a near monopoly was going to get serious competition. The Japanese, especially Honda, which led the global two-wheeler market, were knocking on the door. Bajaj eventually had a collaboration with Kawasaki but by then Honda had tied up with Hero, a cycle manufacturer, and was cornering a lot the two-wheeler market. Bajaj had to face the advent of motorcycles that were more sexy and had greater mileage (Hero Honda’s catchline was “Fill it, Shut it, Forget it”). Then there were also scooters without gears. Bajaj, stubbornly even, refused to let go of the traditional scooter. It would only be in 2009 that his son, Rajiv Bajaj, despite his father’s reluctance, would decide that scooters had no place in their ecosystem.

Bajaj’s business didn’t just survive but grew in liberalised India. He might have got late on the motorcycle game but soon was chasing Hero Honda. He never got to manufacturing cars despite making a serious effort, but in rapidly developing India, two-wheelers were enough for enormous scale. Once he handed over the reins, Bajaj stayed away and let his sons run their businesses without interference. Financial services were split off from Bajaj Auto for his younger son, Sanjiv, to lead, and it is now even bigger than the manufacturing wing. Last year, the market capitalisation of the Bajaj Group crossed $100 billion.
A major criticism Bajaj had to endure was in the immediate post-liberalisation period when he got a group of industrialists together to lobby the Government for more protectionist policies. The ‘Bombay Group’, as they were called, would become a term for entitled businessmen unwilling to compete. Bajaj believed he had strong reasons for the initiative—if it was Government policies over the decades that handicapped and strangled Indian businesses, then when the field was opening, they first needed leeway to become as efficient as the multinationals queuing up to enter India. As an example, there was his own attempt in 1987 to buy Ashok Leyland, the truck manufacturer whose promoters in the UK were selling their 39 per cent. A number of others competed and despite Bajaj’s bid being the highest, the company went to the Hindujas, who were non-resident Indians. Bajaj believed the only reason for this was because, even though he had the funds in rupees, the Government didn’t support him in raising foreign currency. In the section on Rahul Bajaj in Gita Piramal’s book Business Maharajas, he remembered the experience bitterly: “I can’t blame the seller. I can only question our government.” The book also recounted what the Bombay Club did to his reputation: “The protest splattered Bajaj’s whiter-than-white image with the hues of a protectionist. He argued in vain that he was not against reforms but the stain refused to wash out. ‘The whole idea got completely ultofied [sic]. We want Indian companies to become multinational corporations and for that Indian firms need to grow… All we were saying was that the government should enable us to face competition.’”

His was a long life with one main focus—Bajaj Auto—but there were also numerous side explorations.

For a while in the 1980s, Rajiv Gandhi made him chairman of Indian Airlines hoping to revamp it, but the morass proved too thick for him to clear. In 2006, he became a member of Rajya Sabha where his penchant for outspokenness was well served. Even after coming out of Parliament, there was no toning down. It is hard to think of any other businessman in India less afraid of consequences in speaking his mind to those in power. At an event hosted by Economic Times three years ago, he got up and told Home Minister Amit Shah that none of his other industrialist peers would say it openly, but they felt that the Government didn’t take criticism well. There was then that other instance in the early 1990s when a telecom minister in the Congress Government called him and sought a dealership for someone. Bajaj asked that the person apply with the minister’s reference. In an interview to Harvard Business School, Bajaj recounted the incident: “He (the minister) said, ‘Sure, I will send him, but make him a dealer.’ I didn’t know what he meant, so I said, ‘At Bajaj Auto, we deal on merit. I will give it to my marketing chief and tell him that, other things being equal, Mr So-and-So has recommended this case so we should give him preference, but if somebody else is better, then, you know…’ He said, ‘Mr Bajaj, do you know whom you are talking to, I am Minister of Telecommunications.’ I said, ‘Mr So-and-So, you can go to hell’ and I put the phone down.”