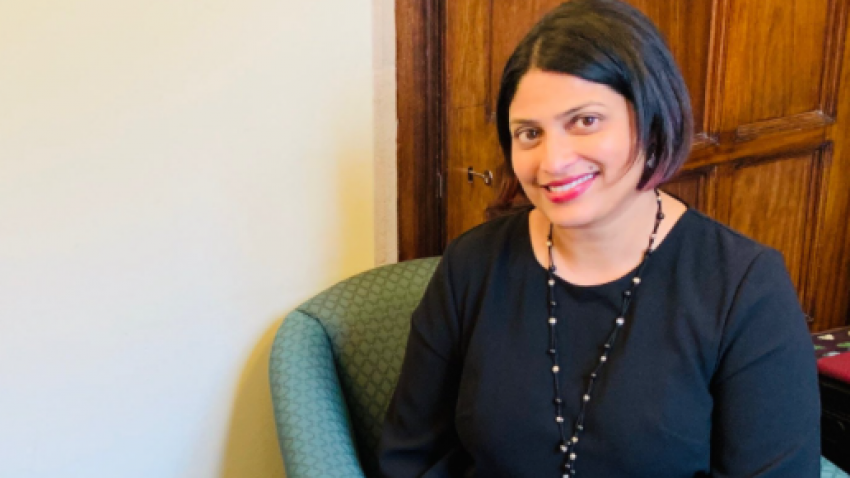 
Priyanca Radhakrishnan, the 41-year-old, Chennai-born, Singapore-bred New Zealand politician of Kerala-origin who was named a minister on November 2 in the Jacinda Ardern-led government in that country, is the first person to ever speak in Malayalam in the island nation’s Parliament.

“Ella suhrithukkalkum ente sneham niranja ashamsakal. Ellavarkum ente nanni areekyunnu (My best wishes to all friends. I thank you all),” is what she had said in the New Zealand Parliament on 16 November 2017. In a video uploaded on the Parliament website of New Zealand,  she added, “I believe that is the first time my mother tongue, Malayalam, has been spoken in this House. I extend my heartfelt thanks and wishes to everyone, to all those who have supported me on my journey to Parliament, including the Malayali community in New Zealand.”

Her maternal great grandfather, CR Krishna Pillai, was a medical doctor, communist leader and trade unionist who launched the Jayakeralam literary magazine in 1947 in then Madras to promote literary writing in Malayalam. Various young Malayali writers of the time, especially those who had settled outside of Kerala, started off their writing career with Jayakeralam.

Radhakrishnan, an alumnus of Victoria University of Wellington, from where she obtained a Master’s degree in development studies before she began her social work among marginalized communities and harassed women in New Zealand, is now minister for the community and voluntary sector, minister for diversity, inclusion and ethnic communities, minister for youth and associate minister for social development and employment. She is one of the four ministers outside the 20-member cabinet.

Her parents, Raman Radhakrishnan and Usha, were originally from Paravoor, Kerala, although they later moved to Chennai before Radhakrishnan was born. Radhakrishnan did her schooling in Singapore.

In her 2017 maiden speech in Parliament, which she started in Maori, she also narrated her journey from Chennai to New Zealand. “Becoming a Member of Parliament is a surreal experience for most, I am sure, but it’s particularly so for someone like me. I was born in India, grew up in Singapore, and I moved to New Zealand as a young adult, at a time in my life when I wanted to step outside my comfort zone, move to a country where I didn’t know anyone, and build a life for myself. It was the best decision of my life, and I am grateful for the opportunities that New Zealand has offered me, opportunities that should be equally available to everyone,” she said in her first speech in Parliament.

She started her speech in Maori, saying, “Ko te mihi tuatahi ki Te Atua, ko te mihi tuarua ki Te Whare e tū nei, he mihi mahana ki a koutou katoa, nō reira, tēnā koutou, tēnā koutou, tēnā tātou katoa (The first tribute is to God, the second one is to the House standing here, and a warm tribute to all of you. Therefore, salutations, acknowledgments, and accolades to you collectively, and to us all.) After that the first India-born woman Labour MP spoke two lines in Malayalam.

She then went on to speak about her idea of New Zealand and the challenges that the marginalized people in that country faced. “New Zealand has the highest rate of reported domestic violence in the developed world. Almost 50 percent of homicides in New Zealand are domestic violence murders. Women are disproportionately represented as victims of intimate partner violence. These are facts, and they hold true regardless of ethnicity. We need to change the way we think about, and respond to, this epidemic if we are serious about addressing it in a way that is meaningful and sustainable. We must consider the benefits of a truly integrated system that ensures no one falls through the cracks. We must challenge gender norms and stereotypes that hold women back and work towards a New Zealand that is truly meritocratic. We must also better support those who do the work in these sectors and ensure that we support their well-being and pay them a decent wage,” she spoke, according to the Parliament website.

On November 2, Radhakrishnan was flooded with greetings from across the world, especially from India and ethnic Indians from across the globe. She thanked everyone in a post on her Facebook page: “Today has been an incredibly special day. I’m feeling a lot of things including an overwhelming sense of privilege to become part of our Government. Huge thanks to everyone who has taken the time to message/call/text congratulatory messages- thank you all. Humbled to be appointed a Minister and I’m looking forward to working with an incredible line up of Ministerial and caucus colleagues this term.” Radhakrishnan lives in Auckland with her techie husband and two rescue dogs.