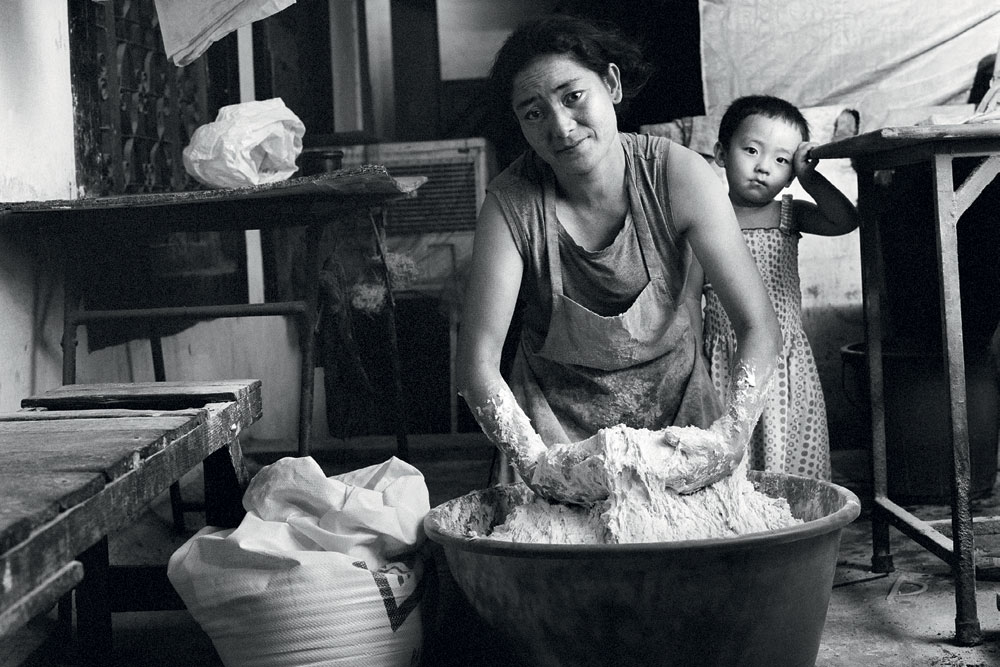 Namlha Thar kneads dough to make bread that she will sell in the temple square. Her daughter peeks from behind her, 2009 (Photo courtesy: Serena Chopra)


Photographs can often capture the truth about people and places better than our own sight. The result is even more effective if individuals add their voices to their images. This is what Delhi-based travel photographer and author Serena Chopra has achieved in her new photobook, Majnu ka Tilla Diaries (123 pages; `2,200). The book was launched recently by photobook studio Offset Projects, and represents the first time that Chopra’s eponymous photo series will be presented in its entirety. Her photos from the series have previously been exhibited in New York and Hus­ton, and they’ve now been compiled into a book. This book and its images convey the histories and struggles of the Tibetan exiles of Majnu ka Tilla and their search for their own identity. The neighbourhood, near the banks of the Yamuna river in North-East Delhi, is a Tibetan refugee colony set up over 60 years ago. From its small beginnings, it has become an integral part of the capital’s experience with its many restaurants, cafes, and vendors. It is also, importantly, a site for Tibetan resistance and solidarity. Chopra’s previous books include Bhutan: A Certain Modernity (2006), and Bhutan Echoes (2016).

The book comprises portrait pho­tographs of the colony’s inhabitants and their views on their unforgotten homeland of Tibet and their life in India, set in the form of diary entries next to their portraits. These entries, the result of eight years of observation and compiled in three journals, were collected with the help of Tenz in Norsang, Chopra’s friend who lived in Majnu ka Tilla and acted as her translator.

The photos are stark and uncom­promising. Chopra, 69, tells Open, “Black-and-white photography is my preferred art form. I feel it expresses reality differently and separates it from the banality of the way we usually see.” Chopra’s empathy for the people she portrays in her book is all the more effective as she has a long history with the iconic neighbour­hood, which began from her days studying English at Miranda House, Delhi, in 1970. Not far from the uni­versity’s north campus, Majnu ka Tilla was her stomping-ground in her searches for momos and dzi bead jewellery, which suited a college student’s budget.


The diary entries, echoing the title, are mostly in the residents’ own handwriting and language. As Chopra explains in the book’s preface, “Sometimes, the individual I photo­graphed wrote in the Tibetan script and, on the same page, Norsang translated the words into English. Oth­er times, a person who could not write would speak in Tibetan and Norsang would translate their words and write them down in the diary.” The subjects’ views in their own words, and the way they’ve been photographed, looking at the camera, gives them a direct, per­sonal connection to the readers, and lends authenticity to their stories.

The individuals, ranging from the young to the elderly are photographed in their homes, and around local land­marks, such as bridges and roads. Some of their accompanying descriptions, though often short, are comprehen­sive, and are even more poignant for their brevity. One of the first photographs in the book reads, “A mother and her child sit with all their possessions on the road bordering Majnu ka Tilla, 2012.” The photograph shows a woman holding her child. Both look un­smilingly at the camera from a sofa on a road with suitcases and bags scattered around them. Another account is that of Rinzin Palmo, 2009. Her writing in the Tibetan script is so perfect it looks like print. The transla­tion below recounts she was a teacher in Tibet, who took 30 days to walk to Nepal when she fled her country. 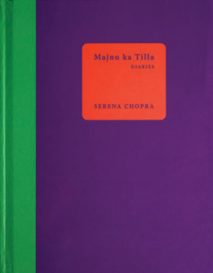 Despite her struggles she is optimistic. “I walked all those days risking my life… but still am happy that I had a feeling I would meet His Holiness Dalai Lama.” She is one of many who risked their all to arrive in India. Dolkar, 83, photographed in 2009, is an aged figure with a faint, yet indomi­table smile. She left Tibet in 1959, for Assam, and lost one of her six children on the way. She took every job that came her way, including travelling to Argentina to act in the Holly­wood movie Seven Years in Tibet (1997)! Even with her trials she writes, “With blessings from HH Dalai Lama, I have lived without much problem.” Her only wish is to see Tibet again.

“The diaries became a point of empathy and a way to share varied lives and attitudes,” says Serena Chopra, photographer

The attitudes of the people in the book range from defiant to philosophical. Most are rooted in their identity as Tibetans. Even those who’ve never been to Tibet and have spent their lives in India, hope to see it, and feel a sense of displace­ment. One inhabitant with this experience, Kunchok Dolma Dheukhan writes in 2010, “I first realised I was different when I stood last in the row to get admission to a class. They told my parents we were refu­gees.” She adds, “I had a sense of not belonging anywhere but as the years went by, I grew up to be proud.” These accounts are all the more vivid as the people in the portraits seem to speak directly to the reader. Chopra explains this as the effect of the diary format, saying, “The diaries became a point of empathy and a way to share varied lives and attitudes. Simultaneously, with these personal diary entries, I could step out of the frame so to speak, giving voice to this community living in exile.”

Chopra’s interest in travel and pho­tography led to a trek in Bhutan in 2002 with her Hasselblad camera, which eventually led to three photobooks. In 2006, a pivotal encounter with the Dalai Lama in Dharamshala led her to write this book. “It was serendipitous. I happened to say to a friend who was in charge of his security that I’d love to have a meeting with him, and he organised it instantly. I was invited to have a personal audience with His Holiness the Dalai Lama.” A vivacious conversation with him led to his sug­gestion that as a photographer Chopra should bring about awareness of the uniqueness of the Tibetan culture, their peaceful struggle and philosophy. After observing a few Tibetan com­munities, like the one in McLeod Ganj, Chopra eventually made her way back to Delhi, and to her old college haunt. Coming back to Majnu ka Tilla in 2007, after nearly 40 years, was a shock. She writes, “The shacks had been trans­formed into a high-rise slum, a hub for every Tibetan coming from anywhere in or out of the country. I booked my­self a cheap hotel room and used it as a base for a couple of months.”

To give as complete and truthful a picture of the neighbourhood as pos­sible, Chopra had to integrate herself into the community, which wasn’t easy. However, she was eventually accepted with Norsang’s support. Chopra adds, “His presence made it possible to make friends with many of the residents, and to gain a modicum of understanding of their lives and feelings. Over the years, trust was generated and then came their participation and an honest representation of their voices in these diaries.”

“I feel black-and-white photos express reality differently and it separates us from the banality of the way we usually see,” says Serena Chopra

As Chopra and the residents became comfortable with each other, she became part of their social life, families, and rituals. She says, “I found night-time in Majnu ka Tilla fascinating. It was at this time after everyone had disengaged themselves from the hubbub of the day and the business of surviving, that the colony came alive. The community point was the temple square in the middle of Majnu ka Tilla. Not a stranger anymore in their midst, I could relax and participate in this scene.”

Chopra exhibited her photos on the neighbourhood in the US. However, the diaries were consigned to a vitrine where one could read only one double-page spread of each entry. The desire to do justice to these entries led her to expand the work. It is in this wider account one has a sense of the tribulations of the Tibetan community in exile. After so many years, they still do not consider them­selves Indian, they haven’t applied for citizenship, and have a strong sense of their national and cultural identity. A 61-year-old man, Tsewang Khangsar, highlights this in this 2009 entry: “As long as the Tibetan identity remains alive in living, breathing Tibetans, Tibet will never perish.”