‘Ours is not a battle with a communal agenda. It’s about the desire of a civilisation to survive‘ 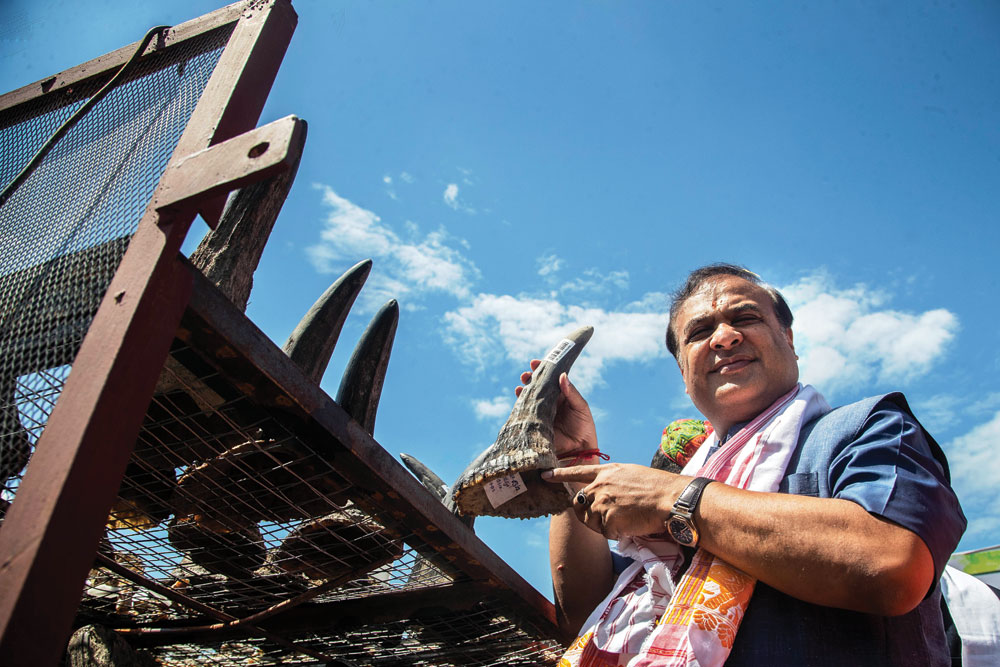 
Assam is undergoing a rapid change in demography whereby indigenous Assamese fear they are not only losing their land but their language and traditions are also being overwhelmed. The state’s chief minister talks to Siddharth Singh about the problem and what he plans to do about it while recognising that times have changed since the Assam Accord of 1985

In many parts of Assam there is a steady demographic change that has produced a volatile situation. What steps are being taken by your government to address the issue?

It is a fact that demography is fast changing. Today, almost in the entire Barak Valley, Muslims who were earlier in a minority are now in a majority. In the entire Lower Assam, right from Nalbari to Dhubri, the situation has undergone change too. In Middle Assam also the situation has changed completely. Some of the historic towns known for their tradition of Sanatana philosophy, or towns known for their Shakti peeth, temples and monasteries, are all now almost under the control of immigrant Muslims because of demographic changes.

The point is: Legally, what can you do? Because it can be a deliberate population change or overproduction of children, or some other reason. But Hindus are also contributing to the change of demography by adopting extreme population measures. In the last 10 years, the average size of a Hindu family has shrunk to one. Now, some critics point out that your National Family Health Survey (NFHS) has shown that the fertility rate is coming down. But the point is that the fertility rate is coming down because the fertility rate among Hindus is coming down continuously. But it is static for Muslims at 2.9 per cent growth every year. This is a huge problem. When people lost their land, when they lost their political power, they lost their seats of worship. It is a kind of pain that others will not easily understand because people will say, “They are Indians, they have rights and they will invoke the rights under the Constitution.” But here you have a lot of emotional agony.

We also do not know how to come out of this. Because these people are also poor, because of extreme population pressure, they are on a mission mode to capture land. What we are doing now is trying to control them. You cannot go and take over forest land; you have to remain where you are. We are trying to do something along those lines.

Much of the char land (riverine islands) is now in the hands of illegal immigrants. How feasible is it to clear those areas?

This is not easily feasible and neither is it practical. I will say that theoretically it is possible because those are encroached lands. But practically that is not possible because the number is huge. There are an estimated 1.5 crore people. Where will you relocate them? And even if you evict them today from the char, they will go and sit on the national highways. So evictions are possible only when new areas are encroached upon. But where land has already been taken, eviction from that land is not a practical solution.

At places, indigenous Muslims have been deprived of their land by illegal immigrants and are now deeply insecure. What steps are being taken by the government to impart confidence to Assamese Muslims?

With adverse demographic changes, there is a demand from indigenous communities for some legal and constitutional protection. Do you have any plans?

We have worked out some legal and constitutional measures. But the constitutional provisions don’t support us. Because reserving seats [in the state Legislative Assembly] doesn’t mean anything. If you vote and the voters are not from the ethnic Assamese community, the MLA elected will also be dependent on people who are not supposed to be represented [illegal immigrants]. But because the arithmetic of votes will take you in that direction, whatever legal and constitutional protections we have worked out so far will have a limited effect. But changing demography and restoring demography are very difficult. We have to protect whatever we have.


There are 1.5 crore people. Where will you relocate them? Even if you evict them today from the char, they will go and sit on the national highways. Where land has already been taken, eviction is not a practical solution

Do you think language is turning into another flashpoint in Assam? The context being the issue of the Assamese language in Barak Valley where they don’t want Assamese but Bengali.

I was in Barak Valley a fortnight ago. I spoke about the language issue and everyone applauded. I don’t think the person arrested today [November 28th] in this matter represents the collective voice of Barak Valley. Today, in Barak Valley, Hindus are in a minority. They want to live in Assam and in harmony with the Hindus of Brahmaputra Valley. So these [opposing Assamese] are fringe voices, encouraged by political elements outside the state. We are aware of those designs. I am sure those voices do not represent the will of the people.

Clause 6 of the Assam Accord of 1985 (on safeguards for the Assamese people) cannot be divorced from other related issues, such as the National Register of Citizens (NRC) and the revision of electoral rolls. How will you take up these issues?

When we signed the [Assam] Accord, we envisaged Clause 6. At that point in time, the Assamese were in a clear majority and probably you could have said that we didn’t want to give anything to both [Bengali] Hindus and Muslims and we wanted protection. But today, if you go by the wording of Clause 6 and if you approach the issue in a plain and simple way, it will come back to haunt you. Because then, Bengali Muslims and Bengali Hindus will be equated. We are trying our best to convince the All Assam Students’ Union (AASU) leadership and other regionalist people that, as Assamese, we cannot stand alone now because we are in a minority. You have to create a society where you take the tribal people into your fold; you have to take people who have migrated from different states of India into your fold, and even Bengali Hindus. Only then will you be able to protect your culture, your language and your civilisation. Otherwise, in 10 years you are gone and out. It [a solution] will take time because our regional people are the product of a huge agitation. For them to admit reality is a very difficult matter. They cannot admit the reality although in private conversations they will agree. But officially, this will be a big somersault for them. Because, during the entire agitation, they made a distinction between Assamese and Bengalis irrespective of religion or civilisational background.

So, coming to terms with the present reality will be a huge U-turn for them. We are talking to them and we are engaging with them and trying to tell them that look, you have to change your ideology and you have to change your approach. If not theoretically, at least from a practical point of view, you have to talk in a different way. You have to work with the tribal people; you have to work with people who have migrated from Rajasthan, Haryana, Delhi and other parts of the country; and you have to work with Bengali Hindus. We don’t have other options. I think the new generation in Assam acknowledges the reality. Therefore, we have to create a constitutional mechanism not out of Clause 6 of the Assam Accord but out of the new and changing realities of the state where Clause 6 will be accommodated along with new realities. We are working on that.

Do you feel the narrative at the national level has been purposely designed to malign Assam’s image? If so, how do you plan to change that?

People blame us for being communal. But if we are communal, why are indigenous Muslims standing with us? Among Bengali Muslims too, there are many who believe in the Sufi culture and they are also supporting us. It is not a battle with any communal agenda. This is about the desire of a civilisation to survive. It is about the desire of the Assamese people that they should not become extinct. Most people from Delhi come only to Guwahati. They will never realise the pain and agony of Assam merely by talking to some people in Guwahati. You have to travel to different parts of Assam to appreciate the reality. I keep appealing to people whenever and wherever I meet them that we are not communal. For us, it is a battle for survival.

What is your message to the rest of India on the dangers of adverse demographic changes?

My view is that whatever is happening in Assam is also happening in West Bengal. The process may be faster in Assam but Bengal will follow Assam in the next 10 years. Kerala has already gone out of bounds. In India, you will face a situation where protecting your civilisation will be a big challenge. What I want to earnestly say to people in India is that this is not a communal division. We want them [immigrants] to live and to grow economically, we want to alleviate poverty but, at the same time, it is appropriate for us to appeal to them that they adopt decent family norms. Do not try to compete with the Assamese people by trying to produce more children. This is a dangerous line: for, in Assam, our civilisation will fall; but for you, your entire new generation will grow up in poverty. I cannot change many things, but we have to hold our fort as long as we can.