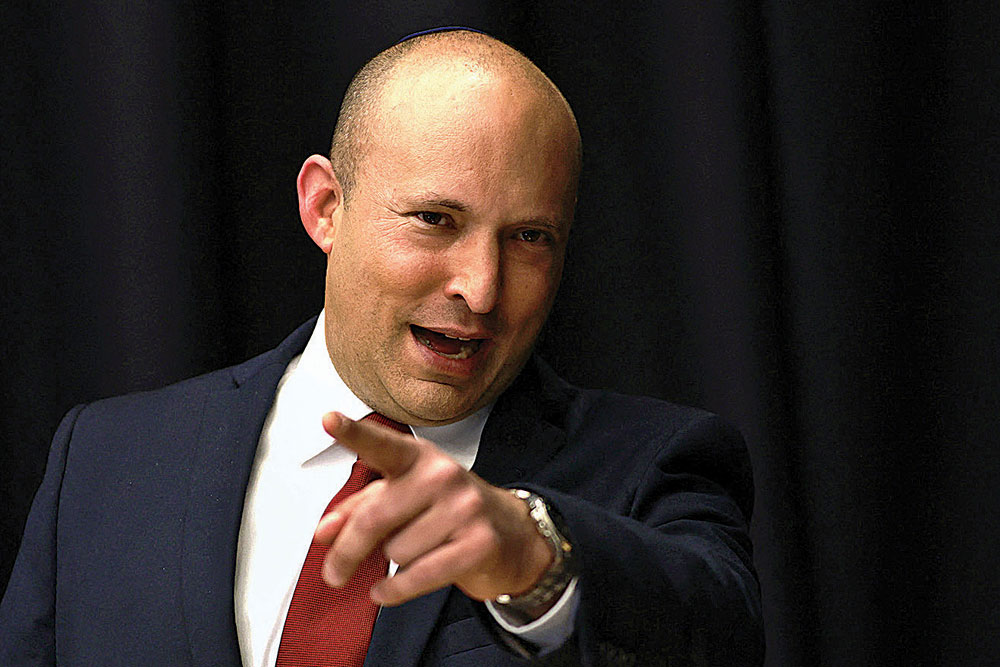 
NAPHTALI WAS ONE of the northern tribes, quick in battle. Its symbol was the deer (a doe), but Jacob’s blessing in Genesis is interpreted as meaning Naphtali both “bears beautiful fawns” and “speaks beautiful words”. After Moses died, Joshua led the Tribe of Naphtali to Canaan. The Tribe of Benjamin, lethal in battle, was caught between worlds, geographically located between the southern kingdom of Judah and the northern kingdom of Israel. After the fall of the united kingdom, Benjamin belonged wholly to the south. Judah outlasted the kingdom of Israel, but the Tribe of Benjamin disappeared from history when Nebuchadnezzar destroyed the First Temple in the sixth century BCE and brought an end to the Kingdom of Judah.

It took the State of Israel three decades since its independence in 1948 to elect its first rightwing government, when Menachem Begin replaced Yitzhak Rabin as prime minister in June 1977. It took Israel another 44 years to see its first religiously observant prime minister in office. Naftali Bennett was born in 1972 in the pretty northern port city of Haifa, home to the Baháí World Centre, to Jewish immigrants from America. A modern-Orthodox, Bennett was hardened by his service in an elite IDF (Israel Defense Forces) commando unit that had an NDE in Lebanon in 1996.

Bennett escaped and studied law, became a tech millionaire, left for the US, returned to Israel, joined politics as a senior aide to Benjamin Netanyahu in 2006, left Netanyahu and Likud in 2008, headed the West Bank settler movement called the Yesha Council, and re-entered electoral politics at the head of the far-right Jewish Home party in 2013. The only political home for Bennett would naturally be Netanyahu’s alliance and he served as minister of defence, of education and of economy. His partnership with Ayelet Shaked saw the founding of the New Right party, which is a part of the Yamina bloc Bennett leads today. Situated to the right of Likud and strongly advocating settler rights as well as the annexation of Area C (about 61 per cent of the West Bank), death for Palestinian terrorists and more Israeli control over the Temple Mount, Bennett’s words have seldom been construed as “beautiful” by Palestinians or by the Gulf states that have of late normalised relations with Israel via the Abraham Accords.

Bennett, in many ways, is a man who is everything he would have appeared not to be. Take his heritage. He is a descendant of the rabbinic Rappaport family. The Rappaports are considered kohanim of the most ancient and authentic pedigree. Bennett’s bloodline also traces him back to Shlomo Yitzchaki, the medieval French rabbi better known as Rashi and noted for his commentary on the Talmud and the Tanakh (the Hebrew Bible). For those who see signs in everything, his premiership was overdue. Yamina secured seven seats in the new Knesset, far behind Yair Lapid’s Yesh Atid (17) and Netanyahu’s Likud (30). But it is Bennett who, with a lot of political and a little physical effort has removed Bibi from the prime minister’s chair. For now.

The man who appears to have redeemed himself is Yair Lapid, the former journalist who is now the “Alternate Prime Minister of Israel” (Ephraim Kishon must be laughing in the Great Beyond) and foreign minister, set to replace Bennett in 2023. Lapid, long considered a “joke” after blowing hot and cold on Bibi, is the helmsman of the Noah’s Ark he has erected with Bennett and Mansour Abbas of the United Arab List in the name of a coalition. It’s up to Lapid to keep the coalition afloat. On paper, the new government is a liberal democrat’s dream. Its regional cooperation minister is an Arab and Muslim. Its immigration minister is a Black woman (she’s been around since last year). Its health minister is openly gay. As New York Times columnist Bret Stephens put it: “It’s difficult to think of any coalition government, in any country, that is as ideologically diverse.”

The only way triumphant Naftali can keep angry Benjamin at bay is by deep-freezing ideology and championing a new “civic nationalism”.