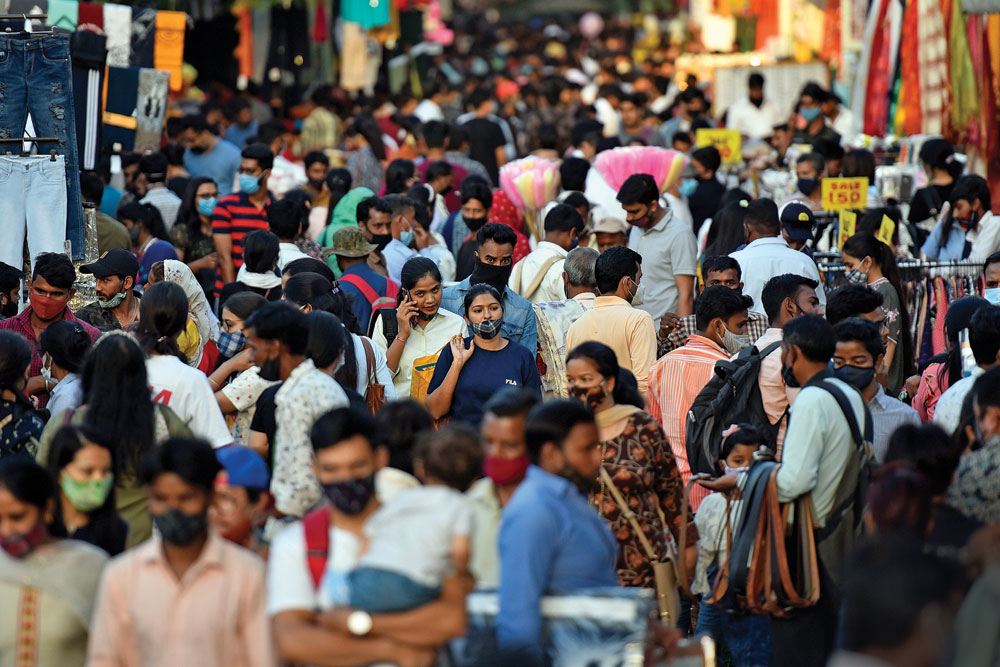 
THE NEW YEAR couldn’t have begun on a better note for India. Covid-19 cases had been on a downswing since September last year and the country was rolling out its vaccination drive. There was talk of India achieving herd immunity even though experts advised caution. Covid-appropriate behaviour—wearing mask, social distancing and basic sanitation—was being followed diligently, though there were the odd Christmas and New Year parties. Weddings, too, were back on the agenda. By February, though, the narrative was swinging in the opposite direction—from 10,000 cases , India crossed the 1 lakh-case milestone in under 40 days. In September 2020, cases had peaked at 97,894 infections in one day.

Since then, it has been a barrage of bad news; states like Maharashtra are again running out of hospital beds even as the Government confirms the presence of mutations. Large gatherings, be it at the Kumbh Mela or Holi celebrations, have been the cause for much worry, as has been the opening of schools. A false sense of bravado bolstered by a misleading narrative of herd immunity did not help matters either. The final icing on the cake has been the state Assembly elections preceded by energetic campaign rallies which have been, to put it mildly, rather well attended. Even then, the intensity of the second wave has taken people, including experts, by surprise.

“Hindsight is always 20:20 but even till the month of December, I did not think we would have such a strong second wave,” says virologist Shahid Jameel. The curve had been going down since September and neither the festive season nor elections in Bihar led to an increase in infections. Serological surveys showed that at least some percentage of the population had been infected already. “Now we know that while clearly enough people were infected during the first wave, enough number of people weren’t exposed too,” says Jameel. The mutations, he feels, are contributing to it.

Mutations in a virus are expected and, in most cases, they are minor, so as to not really change the behaviour of the virus. But some mutations cause changes in the spike protein which makes it easier for the virus to attach itself to cells in the bodies, thus spreading faster. The change in the protein also implies that the body is unable to recognise the altered virus. With Covid-19, the first mutation was noticed with what has come to be known as the UK variant. Since then, there has been the South Africa variant as well as the Brazil variant. All three variants are believed to be responsible for the surge in Europe and Brazil over the past few months. The three strains have been found in India also, apart from a double mutant variant that is specific to India.

“I would attribute this (steep increase in infections) primarily to new variants capable of re-infections. There is little that can account for the steep rise in cases in cities such as Pune which were hard the first time round and where it has been estimated that over 50 per cent were infected over the several months preceding this current rise,” says Gautam Menon, professor, Department of Physics and Biology, Ashoka University. Genomic surveillance is of utmost importance to understand the working nature of the virus, but India is lagging in this field. Very limited genome sequencing has been done of the variants in circulation, with both lack of samples being shared and budgetary constraints acting as stumbling blocks.


But while variants are playing a big role in the spread, human behaviour also has to be taken into account. Nearly all the experts Open reached out to cited a lax attitude towards Covid protocol as being a key factor. Rajesh Chawla, senior consultant, Respiratory and Critical Care, Indraprastha Apollo Hospitals, calls this “pandemic fatigue”. “People are not following protocol, there are lunches, anniversaries, get-togethers, not giving the cycle of infection a chance to break. People were careful earlier when it came to the wearing of masks, washing hands, but the fatigue factor has crept in now,” he says. The repeated narrative of the virus being less infectious in India or the death rate being low has also contributed in creating a false sense of security. The spread of the infection in cities like Mumbai and Delhi in the second wave is increasingly taking place in more affluent pockets, lending credence to the theory that people who had isolated themselves in the first wave are more susceptible. “The constant narrative of India’s death rate being low is not helpful. We compare ourselves to the US when actually we should compare ourselves to our neighbours like Bangladesh and Pakistan in order to get a sense of how the virus is behaving in the subcontinent. Do remember that viruses only cause infections; pandemics are actually created by human beings,” cautions Jameel.

The rules of how to stem the spread of the virus remain unchanged from last year. Mask-wearing, social distancing, avoiding large gatherings, improving ventilation—the steps to be followed are basic—especially if a lockdown is to be avoided. Contact tracing still remains the best bet to control the spread of infection, but few countries, save for New Zealand, have been able to follow this with near-perfect results.

A little over a year has passed since the pandemic was declared and not much has changed since then, except for one key factor—vaccines. What was only a glimmer of hope at this time last year is a reality today with countries across the globe vaccinating their citizens. Israel, which has been administering the Pfizer vaccine to its citizens, has already seen a tapering off of infections. India’s vaccine drive started in January with frontline workers being eligible. The country is currently in its third phase of vaccination, with senior citizens and those above 45 being eligible for jabs. However, vaccine hesitancy has been a problem since the first day. The dip in cases was cited as a factor by experts apart from a general distrust of the vaccines. But since infections have started galloping, the demand from ordinary citizens to open up vaccination for all is going up too, especially since India has been the frontrunner in ‘vaccine diplomacy’, supplying shots to other countries. “The Government’s current strategy of a controlled rollout which prioritises the most vulnerable is right. Vaccines reduce transmission, they reduce the mortality rate. If we open vaccination to all, then we are diverting precious human resources. Also, even if we start right now, the benefit will not be obvious before summer,” says Chandrakant Lahariya, a public health expert. There is also the added pressure of scaling up production of the shots at a time when vaccine manufacturers are struggling to keep up with their international commitments. One solution forwarded by experts is approving vaccines like Pfizer and Johnson & Johnson and starting their production in India.

Large gatherings, be it at the Kumbh Mela or Holi celebrations, have been the cause for much worry, as has been the opening of schools. A false sense of bravado bolstered by a misleading narrative of herd immunity did not help matters either

Several phrases made their way into our vocabulary last year but none had the same urgency as ‘flattening the curve’. It was a rallying cry and a plea rolled into one. According to Menon, the peak of the current wave, given the models he works with, “will likely come between the middle of April and the middle of May with late April being a reasonable bet.” However, there is a caveat. “This depends a lot on measures we take right now. In general, one should not trust models that claim excessive precision or that indicate a narrow range for the peak. There are too many uncertainties out there, the main one being the understanding of how human behaviour is modified in response to news of rising cases,” he says.

Covid-19 is not the first pandemic of the 21st century. In 2009, as H1N1 cases spread through Mexico and the US, the World Health Organization declared it a pandemic. It did not play out in the catastrophic manner expected. That would happen nearly a decade later with another virus. But for Lahariya, it highlights the one thing we know for certain about viruses: just how uncertain their behaviour can be. The only way to see this second wave through will be how the first wave was tackled—by masking up. No one wants to speculate about the numbers we will end up with this time, but they are certain that it will be high given the infectious nature of the strains. “The strategies for dealing with this are well known. There is a lot the Government can do, but there is so much more the people can do,” says Lahariya.