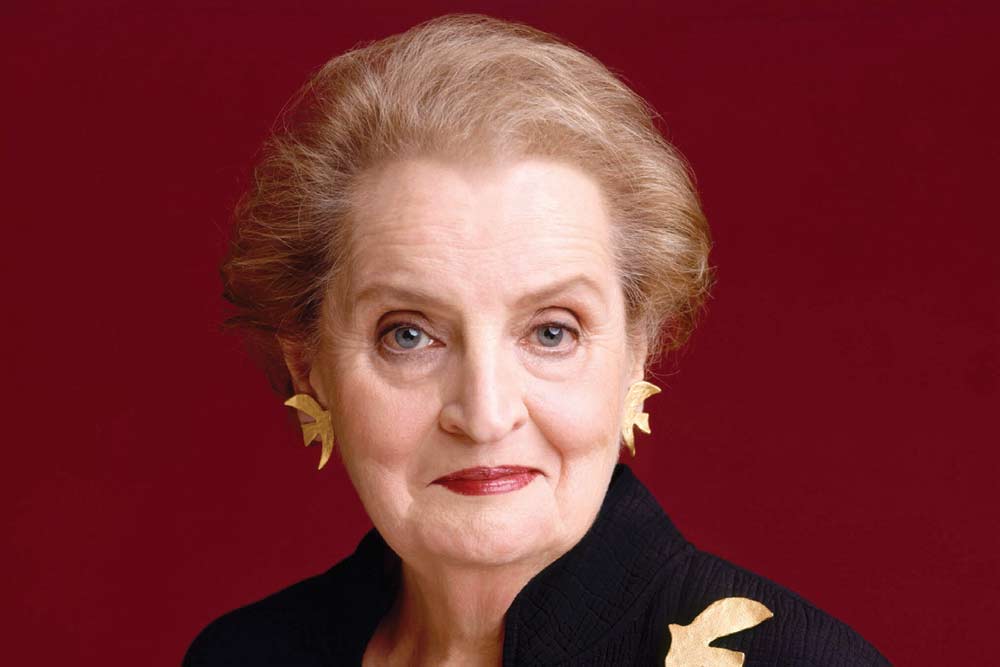 
MARIE (OR MARIA) Jana Korbelová lived the American Dream. Born in Prague to a father who would soon be exiled after the Nazi invasion of Czechoslovakia, she emigrated to the US where her family, staunch anti-communists (as they were anti-fascists) who feared returning to communist rule, was granted political asylum. Marie Jana became Maddy, the quintessential American teenager, although that’s where her similarity with the average American kid ended. In 1997, she would be confirmed as the 64th and first woman Secretary of State, succeeding Warren Christopher. Together with her baby-boomer president, Bill Clinton, Madeleine Albright was history’s choice as the top diplomat of the surviving and victorious superpower at the 20th century’s last world-defining moment.

As the tributes poured in after her death on March 23 at 84, memories of the good resurfaced along with those of the bad and of the ugly.

First, the good. Albright was, after her family, a ferocious opponent of both of the last century’s totalitarian extremes that had destroyed a continent and killed people as never before. The shadow of her past did not stretch merely over the four-plus decades of the Cold War but all the way back to the rise of fascism in Europe. Raised Roman Catholic, Albright found out rather late in the day about her Jewish relatives killed in the Holocaust. She was, therefore, a champion of democracy and individual freedom, and not only in the definitions thrust upon her by her admirers and beneficiaries. The Kosovar Albanians and the Bosnians would testify to that. Albright brought a hawkishness to her worldview and a no-nonsense attitude to dealing with leaders and nations that, in retrospect, is difficult to find substitutes for. The world was coming to terms with the aftermath of the fall of communism and the Soviet collapse, Saddam Hussein had complicated a complex Middle East, the Israeli-Palestinian conflict had degenerated from the Oslo Accords to stay suspended between the First and Second Intifadas, Islamism was rearing its head as the new arch-enemy of democracy and the West, the death throes of the war in the former Yugoslavia had become a serialised genocide. Could Albright and her boss have done any better?

The bad. Some things could have been done better. Clinton did not intervene in Yugoslavia at the peak of the violence when it could have saved lives on all sides. Albright at the time was ambassador to the UN. When she drove Clinton to bomb Serbia—a NATO aerial campaign without a UN mandate—it was arguably no longer a necessity and resulted in needless destruction and death. On a bigger scale, Albright failed to undo her predecessor’s failure to grasp the opportunities thrown up by the Soviet Union’s demise. When a fledgling Russia needed help, and perhaps a little respect, the Clinton administration added fuel to the fire of ‘liberal hegemony’, trying to remake Russia in America’s image. There’s a straight line of causality from the humiliation heaped on Moscow to the emergence of Russia’s new strongman Vladimir Putin. Closer home, Albright was not only the leading force behind the Clinton administration’s sanctions against India after the Pokhran nuclear tests of 1998 but she also, at one point, wanted to internationalise Kashmir. India, of course, also managed to evade her attempts to compel Delhi to sign the CTBT.

And the ugly. The obverse of her diplomatically poignant insect brooch or snake pin were her less guarded comments, most infamously when Lesley Stahl had asked her on 60 Minutes in May 1996 if she thought sanctions against Iraq were worth the death of half a million children. She had replied: “I think that is a very hard choice…but the price, we think, the price is worth it.” (The clip resurfaced after her death.) Less well-known is her being caught on video yelling at protestors (against the 1999 NATO bombing of Serbia) at a book-signing in Prague in 2012: “Disgusting Serbs, get out!”

Madeleine Albright’s legacy is some parts heaven and some parts hell. It may not be possible to determine which lot weighs heavier. But what can’t be taken away is her place in history—the world we inhabit was in large parts shaped by her choices a little more than 20 years ago.