Jagdeep Dhankhar: The Jat Who Came in from the Cold 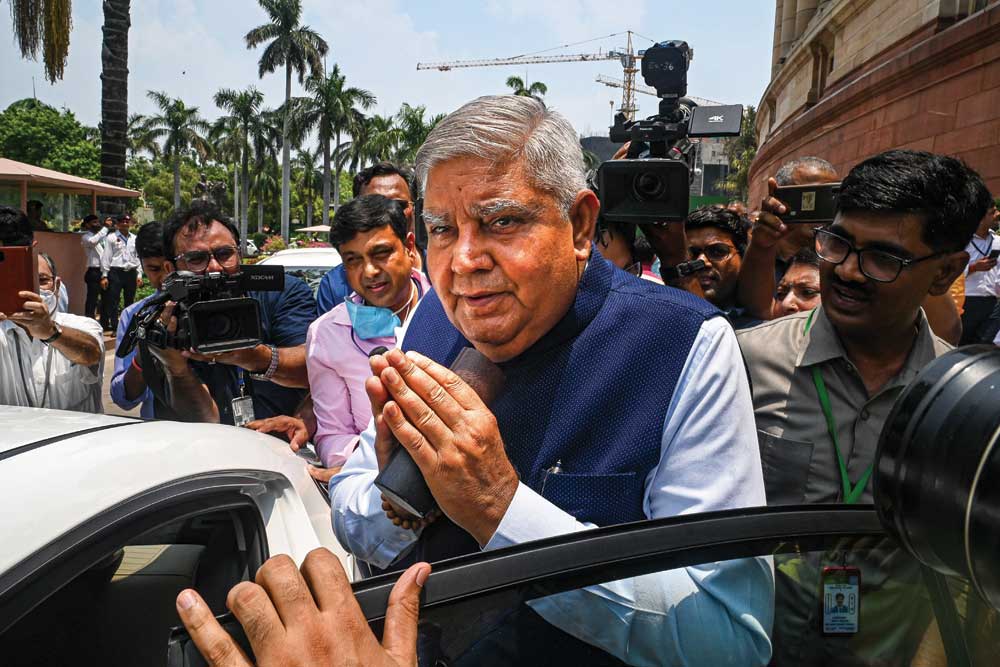 
ON ONE OF THOSE days when two seasoned lawyers—Jagdeep Dhankhar and Bimal Roy Jad— walked down the Supreme Court corridors, their conversation turned to judges. Jad, a senior advocate, recalls that Dhankhar, who never raised his voice in court, told him that it was always better to be polite to judges because one had to keep going back to them. He would crack a joke even if a matter was dismissed.

Discussions brewed over various subjects, at times over coffee, Dhankhar’s favourite beverage, in the court canteen, where he would insist on paying for his juniors’ coffee, upholding a bar tradition. Lawyers who have worked with him in high courts and the Supreme Court say he always took time out to mentor junior lawyers on the art of advocacy, just like he helped youngsters in the Bharatiya Janata Party’s (BJP) legal cell. Those were the days when he was almost in exile from his political life. When the Modi regime picked him to go to Kolkata as West Bengal governor in 2019, Dhankhar may not have known that it would be just the beginning of a new lease of public life for him. It was in West Bengal that he emerged from the sidelines, capturing the spotlight, his antagonism with the Mamata Banerjee government overshadowing his characteristic sense of humour.

Chosen as the BJP-led National Democratic Alliance’s (NDA) vice presidential candidate, Dhankhar, 71, if elected, will also be chairperson of Rajya Sabha, presiding over proceedings of the House where the margin between treasury and opposition benches is thin. For BJP, he ticks several boxes. A Jat from Rajasthan who started his political career under one of the community’s tallest leaders, Devi Lal, he will fill a void in the party’s Jat leadership. Jats and Marathas were two elements disgruntled with BJP after 2019. With Dhankhar as the likely vice president, given the numbers tilting in his favour, and Eknath Shinde as Maharashtra chief minister, BJP has reached out to both these sections. Though Dhankhar’s role would not be a political one, rather requiring an apolitical approach, it would send a message to Jats, not just in Congress-ruled Rajasthan which goes to polls next year but also in Haryana and Punjab where they constitute over 20 per cent of the population. Jats comprise just about 9 per cent of Rajasthan’s population, but the community is estimated to have an influence in over 40 of the 200 Assembly seats. In the Uttar Pradesh (UP) Assembly elections earlier this year, Jats of western UP largely backed BJP, despite Jayant Chaudhary’s Rashtriya Lok Dal (RLD), a party with a Jat vote base, joining hands with Akhilesh Yadav’s Samajwadi Party (SP) and the opposition dubbing BJP as anti-farmer, following the farm laws that had sparked off an agitation. Dhankhar’s candidature can put those in the opposition, who claim to be Jat leaders, in a dilemma.

Like Draupadi Murmu who was elected president on July 21, Dhankhar, too, fits into the mould of a self-made politician from a humble background. He was born to a family of farmers in Kaithana village of Jhunjhunu, which falls in the Shekhawati region, to which former Vice President Bhairon Singh Shekhawat also belonged. Dhankhar went on to do his graduation in physics and his LLB from Rajasthan University. Unlike Murmu, who is from the marginalised tribal community, Dhankhar is a Jat, a pastoral community which holds political clout in several northern states. After the announcement of his candidature for the vice presidential race, both Prime Minister Narendra Modi and BJP President JP Nadda described him as “Kisan putra (Son of a farmer)”.

Dhankhar also comes armed with legal astuteness, which he flaunted in West Bengal to question the Mamata Banerjee-led Trinamool Congress (TMC) government, particularly on the law and order situation. Chosen to be the state’s governor soon after the 2019 Lok Sabha elections, in which BJP won 18 of the 42 seats in West Bengal, rattling Banerjee, he did not adhere to the traditional role of a silent governor. Dhankhar, with a “451.7K” following on Twitter, unfurled his diatribe against the Mamata government on social media and through sound bites. Trinamool accused him of playing politics, “crossing constitutional lines”, while BJP lauded him for “upholding” the Constitution. He neither confined himself to Raj Bhavan nor was inaccessible to anyone, at any time.

Among his many facets was his love for music and “shayari (couplets)”. He liked to hear Babul Supriyo sing, just as he appreciated the songs written and composed by Banerjee. But what made him drive down to Jadavpur University in September 2019 to “rescue” Supriyo, then a BJP MP, from students who heckled him, was not merely his fondness for music. The episode was the beginning of what was to be three years of confrontation between Raj Bhavan, once the residence of the British viceroy, and Nabanna, the building where the chief minister’s new office is
located. Relations between Dhankhar and Supriyo soured once the singer-turned-politician quit BJP and switched to Trinamool last year. After Supriyo won the Ballygunge Assembly seat on a TMC ticket, his swearing-in got delayed as Dhankhar, still governor, appointed Deputy Speaker Asish Banerjee to administer the oath, leading to a tussle on Twitter.


Although Dhankhar’s role would not be a political one, rather requiring an apolitical approach, it would send a message to Jats not just in Congress-ruled Rajasthan, which goes to polls next year, but also in Haryana and Punjab

The Dhankhar-Banerjee face-off continued after the state elections of 2021, which Trinamool Congress swept. In January 2022, Banerjee blocked Dhankhar on Twitter saying he was targeting government officials as if they were “bonded labourers”. The governor responded with a tweet: “Mandated under Article 159 of the Constitution to ensure none in the state ‘blocks’ Constitutional Norms and Rules of Law and those in authority ‘bear true faith and allegiance to the Constitution of India.’” Just days before he was named NDA’s vice presidential candidate, he gave a parting shot, appealing to civil society, intelligentsia and media to highlight the governance situation of “extreme appeasement, communalised patronage, mafia syndicate extortion in the state”.

Trinamool Congress, which views his promotion as a reward for his role as governor in West Bengal, desisted from an immediate response on his being chosen as NDA’s vice presidential candidate. The party would again come face-to-face with him in Rajya Sabha, where it has 13 MPs. The opposition has named veteran Congress leader Margaret Alva, 80, as its vice presidential candidate. Born into a Roman Catholic family from Mangaluru, she too is a lawyer, a former minister and governor. A four-time member of Rajya Sabha and once elected to Lok Sabha, she had joined politics in 1969, influenced by her in-laws who were Congress MPs. Besides Rajasthan, she was governor of Gujarat, Uttarakhand and Goa. With parties like Naveen Patnaik’s Biju Janata Dal (BJD) and YS Jagan Mohan Reddy’s YSR Congress backing her opponent, Alva knows it’s a “difficult battle” for her.

Dhankhar, who started his political innings in 1989, when Devi Lal fielded him from Jhunjhunu as the Janata Dal candidate against Congress, had a stint as a minister in the Chandra Shekhar government, after he followed his mentor out of the VP Singh regime in 1990. But, when the Chandra Shekhar government fell and Congress’ PV Narasimha Rao became prime minister, Dhankhar joined Congress, and won the Kishangarh Assembly seat in Rajasthan. With Ashok Gehlot at the helm in Congress in Rajasthan, Dhankhar had to walk out of the party with other Jats. He joined BJP in 2003, but was denied a ticket in the Assembly polls that year. Ever since, he has not fought an election. Sidelined in the Vasundhara Raje regime, he returned to practising law, his first career before joining politics.

His bar colleagues remember him as being persuasive and sharp-witted, with an ability to turn rancour into laughter, all of which may be put to test soon in the Upper House of Parliament.