Should India be prepared for a new Covid wave? 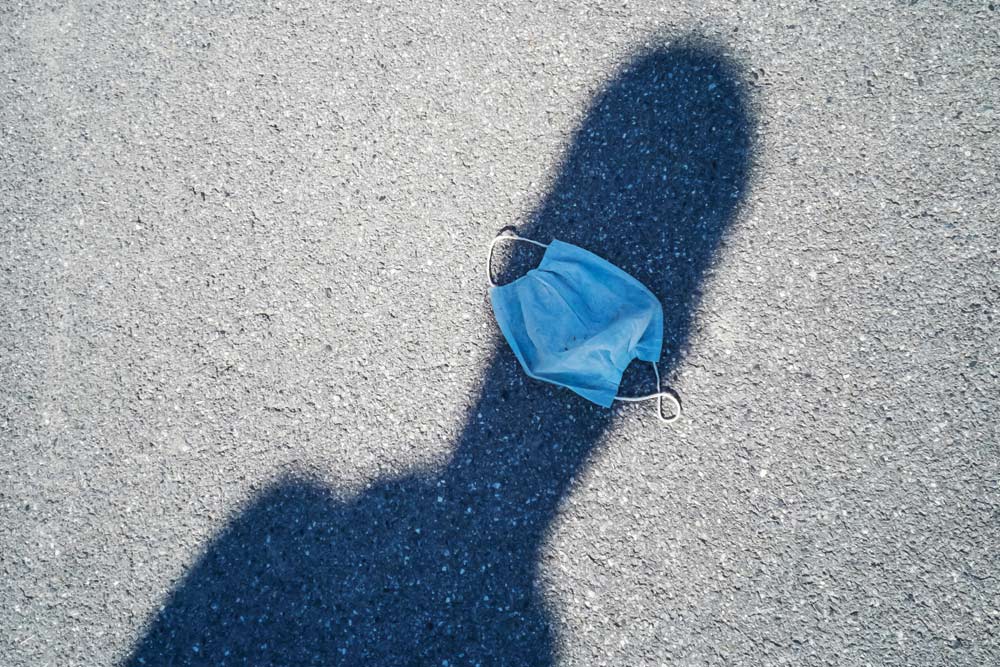 
TWO YEARS SINCE the pandemic, India’s Covid-19 numbers couldn’t have been better. On March 22, just 1,581 individuals tested positive, the third day in a row where fewer than 2,000 people were found to have contracted the virus. This figure has been declining rapidly, from around 2.5 lakh at the end of January to the current low. Just 33 individuals died. In comparison, the death toll remained over 1,000 daily for several days in early February.

In Mumbai, which has been among the worst hit Indian cities at different junctures during this pandemic, just 26 individuals turned up positive on March 22. It was the sixth day in a row where no individual died from the infection. In fact, 20 of the 22 days this month went by without any deaths connected to the virus. And, according to the city’s health officials, just 32 beds in hospitals remained occupied by the infected on that day.

“I have just one [Covid-infected] patient under my care,” says Dr Rahul Pandit, the director of critical care in Mumbai’s Fortis Hospital, and a member of the national and Maharashtra Covid-19 taskforces. “I think I can safely say that since the pandemic began [looking at the burden on hospitals], this is the best it has ever been.”

And yet, even as new bests emerge and conversations of the pandemic’s endgame begin at least in this country, cases have begun piling up frighteningly elsewhere, from Hong Kong, parts of mainland China, South Korea, Singapore, New Zealand and some other Pacific countries, to now the UK, Germany, Italy and some other parts of Europe. In some places, like mainland China and Hong Kong, there are more cases now than have ever been in any other period during this pandemic. Hong Kong, before this current wave, had reported a total of only 212 coronavirus-related deaths, courtesy in no small measure to its tough “zero Covid” strategy. Now, it is recording above that amount almost daily. Even in the US, cases have seen a gradual increase of late, and public health officials like Dr Anthony Fauci have begun warning of the likelihood of a new surge within weeks, and suggesting the need of a second booster shot (fourth dose) of the Pfizer and Moderna vaccines for the elderly.

What is going on? Have we emerged from the third wave here in India only to be confronted by a possible new one currently filling its sails elsewhere in the world? Could this be the lull before yet another surge?

In Maharashtra, among the first states to have registered the three waves of Covid in India, scientists are now searching for signs of a fourth. Labs here are looking for dangerous new variants, from the samples of international visitors who turn up infected, and those picked up randomly from the samples of the locally infected. With the number of cases dropping rapidly, and along with that, the drop in samples collected for genome sequencing in the state, Maharashtra’s seven labs have now even begun sequencing the genomes of samples from other states.


In Mumbai, the Brihanmumbai Municipal Corporation (BMC) will soon commence genome sequencing of wastewater samples that turn up positive in the city. Tracking the wastewater can provide a quick glimpse of whether Covid levels are rising or falling, according to Suresh Kakani, BMC’s additional commissioner in charge of public health. People who are infected with Covid shed the virus in their faeces, and because the infected often begin shedding the virus before they test themselves—if at all they do—tracking the sewage can provide an early warning system of coming surges. And by sequencing the genomes of the positive samples in the wastewater, Kakani explains, it also helps public health officials look for the circulation of dangerous new variants.

“We need to track new variants to prepare ourselves,” Kakani says. “We feel it is unlikely that the surge being witnessed in some of these places abroad will be reflected here, but the virus can mutate or recombine, and we need to keep a check on that.”

Even while the numbers here might be at an all-time low, both Central and state governments appear to be keeping themselves prepared for a possible new surge. The National Technical Advisory Group on Immunisation (NTAGI), the scientific group advising the government on Covid-19, for instance, has now recommended reducing the gap between the two doses of the Covishield vaccine in the country from 12-16 weeks to 8-16 weeks, and, according to reports, the government is set to take a call on it within a few days. Keeping an eye on the surge elsewhere, the government is also considering expanding the coverage of precautionary or booster shots, according to reports, from the current group of those who are 60 years old or above, to all adults.

In places like Hong Kong, many people are still unvaccinated; those who have been inoculated have used the Chinese vaccines that are believed to provide less protection; and a successful ‘zero Covid’ strategy so far means that as Omicron approaches, large swathes of the population have never been infected and acquired any natural immunity

In Mumbai, even though its massive hospitals—each having a capacity of caring for over 1,000 patients—are now virtually empty, the city’s public health officials have put off dismantling them for now. “We are keeping an eye on the surge abroad. At least for the next two weeks, we will see what happens,” Kakani says. “The thing is, these hospitals aren’t easy to set up quickly if something were to happen. So, for now it makes sense to keep them open to see what happens,” Dr Pandit says.

THE CURRENT SCARE in India is driven to a large extent by a controversial modelling study published by some researchers from IIT Kanpur. The study, yet to be peer reviewed and posted on the preprint repository MedRxiv, which uses a statistical model to make the prediction, claims that a fourth Covid wave will hit the country in June and peak by mid or late-August. Most epidemiologists and experts believe this is very unlikely.

The current surge in a place like China, which had managed to keep the coronavirus largely in control through its dogged pursuit of a “zero Covid” strategy, is now severely testing its strategy with the highly infectious Omicron variant. In places like Hong Kong, for instance, many people are still unvaccinated; those who have been inoculated have used the Chinese vaccines that are believed to provide less protection; and a successful “zero Covid” strategy so far means that as Omicron approaches, large swathes of the population have never been infected and acquired any natural immunity. In Europe, the current surge appears to be driven largely by the BA.2 sub-lineage of the Omicron variant, the sub-lineage, Indian health officials say, that is believed to have been largely responsible for the third wave in India. Indian scientists sampling sequences reported in February that BA.2 was already the dominant strain fuelling the country’s Omicron surge. In Mumbai, for instance, during the city’s latest round of genome sequencing earlier this month, scientists found that not only had Omicron entirely replaced the Delta variant in the city, the BA.2 sub-lineage also made up for most of the prevailing cases. “During our latest genome sequencing round, we did not find a single Delta in any of the samples tested. It was all Omicron, and within that, the BA.2 sub-lineage was the most dominant,” Kakani says. According to Dr Pandit, since this sub-lineage is already floating through the country, it is unlikely that the current BA.2-fuelled surge being witnessed elsewhere would create such an impact here.

Earlier in March, Manindra Agrawal, professor of mathematics and computer science at IIT Kanpur—who was erroneously identified as a member of the team from IIT Kanpur that predicted a fourth wave would hit India in June by many publications—began to look, along with a few other researchers, at why different countries saw such different trajectories when Omicron fuelled new waves across the world. Agrawal, along with Mathukumalli Vidyasagar from IIT Hyderabad, has been predicting the severity of various Covid waves using a computer model (SUTRA) and is often consulted by government bodies. “A curious phenomenon has been observed: while in some countries the Omicron wave has been comparatively mild, some others had a massive wave. For example, in Israel, the Omicron wave peaked above one lakh cases per day, nearly 10 times more than the earlier peaks. Similarly, in Spain, the Omicron peak was nearly four times higher than earlier peaks. In comparison, Omicron wave in South Africa has peaked at a similar level as a previous wave, and in India, the peak was smaller than the previous peak,” the authors write in the paper.

How does one explain such wide differences, especially when one takes into account that countries like Israel and Spain had successfully vaccinated (and even boosted) much larger proportions of their populations compared to countries like South Africa and India? According to Agrawal, this has a lot to do with the kind of immunity prevalent within a particular population when Omicron hit: whether it was natural (obtained after an infection), vaccine-only (vaccination but no past infection), or hybrid (both vaccinated and infected). Simulating Omicron trajectories in 15 countries across the world using the SUTRA model, Agrawal and his team of researchers tried to quantify levels and types of immunity loss that occurred in these countries.

Agrawal and his team of researchers found that countries whose populations mostly had vaccine-only immunity like Canada, Israel or European countries like Greece and Spain, witnessed a large surge in Omicron cases. In comparison, countries like India, South Africa and Brazil, or those in our neighbourhood like Nepal and Bangladesh, which had high natural or hybrid immunity, saw relatively smaller waves. “This goes on to show that vaccine-only immunity was not able to stop the Omicron infection. Vaccines made sure that the infection was largely not dangerous and helped people from not becoming severely ill. But as far as the infection and its spread were concerned, they were not particularly useful. On the other hand, natural immunity was really useful to stop the spread quite significantly,” Agrawal says.

According to him, the current surge in some Asian countries only further strengthens the arguments of his study. “Places like China followed a “zero Covid” strategy. They did not allow the virus to spread a lot. And they may have vaccinated a lot of their population. But as we have seen, when it comes to transmission of the virus, vaccines are not very useful against Omicron,” he says. The spike in cases across a few European countries can be explained by the recent lifting of their various Covid restrictions.

After the Omicron wave, according to estimates, Agrawal points out, around 95 per cent of Indians have acquired natural immunity. This makes the chances of a new wave emerging in India highly unlikely. “From the experience of past waves, where no new mutant was able to breach natural immunity in any significant way, if this still holds, then we will not see any new wave,” Agrawal says.

“For a new wave to emerge, a new variant will have to have very special characteristics. It will need to be able to breach natural immunity in a big way. This hasn’t happened so far. But, of course, you can never rule it out.”