With the flicker of an eyelash, an artfully displaced lock of hair, a careful modulation of his voice, he could make women swoon and men weep. Muhammed Yusuf Khan was the last of a gilded trinity that defined an era 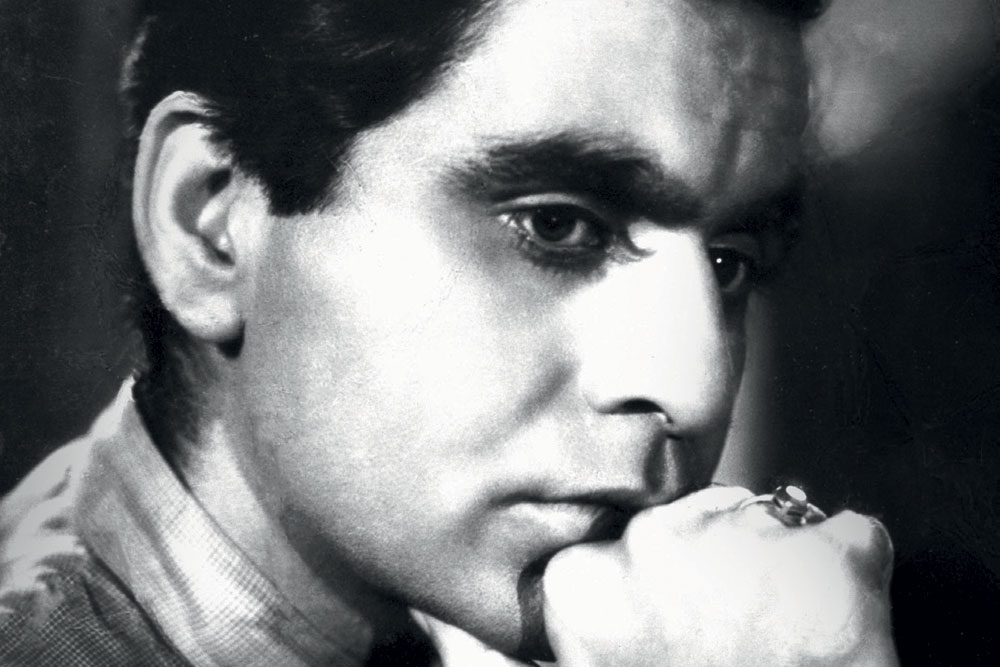 
THAT LOPSIDED SMILE, almost as famous as that of Madhubala, the woman he loved and loathed with equal passion. The deep-set eyes, receding fur­ther when the brows furrowed. The deliberate way of speak­ing, the volume rising and falling as the occasion demanded.

Dilip Kumar was a man made for the movies, the sport he played in his youth allowing him to tumble in and out of frames, give chase to a much younger Amitabh Bachchan in a tension-filled climax set in an airport runway, and play goofball with élan. There is an early scene in the comedy Ram Aur Shyam (1967) when Dilip Kumar is playing around with a piece of rope. “Mummy,” he says, in a plummy accent, “open the door. Mujhe sheher jaana hai aur kheti ke liye beej lana hai. And my tractor is out of order.” Then another in Aan (1952), when he is virtually stalking Nadira, the haughty princess, and shoots half-a-moustache off the face of a guard who dares to question him. And yet in another scene in Mu­ghal-e-Azam (1960) where he counters his mother, the queen: “Toh mera dil bhi aapka Hindustan nahin jis par aap hukumat karein / My heart is not Hindustan that you can rule it.”

So many Dilip Kumars, so many movies, so many memories. One-third of a trinity that dominated the movies in 1950s and 1960s, they were men in step with a new India and a newer world. Dilip Kumar would famously turn down a role in Lawrence of Arabia (1962) in David Lean’s epic that went to Omar Sharif. He would admit to depression and undergo therapy, all in the public eye, going to England for several trips to seek out drama coaches and therapists. And he would romance a string of beautiful women on and off the screen in the kind of grand passion rarely seen today, be­fore finally settling down to marry one of the most celebrat­ed beauties of her time, Saira Banu. Twenty-two years his junior, a woman whose hand he held almost till the day he passed away—there was a momentary lapse, much written about, with a woman named Asma, which the actor apolo­gised for. If Raj Kapoor was all boy-man angst, Dev Anand typified urbane swagger, Dilip Kumar embodied emotion, deeply felt, carefully plumbed and artfully expressed.

Born Muhammed Yusuf Khan to a fruit merchant in Peshawar, he came from the same geography that would produce the Kapoor clan and Shah Rukh Khan’s father, Taj Mohammed. Dilip and Raj went to the same school and had the same friends though they were two years apart. They also entered the same profession. Dilip Kumar was a great believer in destiny, and indeed, his cinematic name itself is the stuff of legends and as such has many versions—the most authentic suggests that when asked to choose between Jehangir, Vasudev and Dilip Kumar by Devika Rani, his first movie employer at Bombay Talkies, he selected the last, hoping it would give him plausible deniability as he was terrified of his father’s reaction to his profession.

DILIP KUMAR LIVED a life of great dignity, never complaining, never explaining, always on the side of the progressives, whether as sheriff of Mumbai or as the unofficial leader of the film industry, but increasingly at odds with the changing public mood towards Muslims. One close director friend recalls a trip with him by air to Delhi in 2000. A minister of the NDA Government was on the same flight and the actor was most offended when the director acknowledged the minister. “You are friends with such people,” asked the actor, intentionally loud enough for the minister to overhear. That was not the end of it. When they disembarked, the minister sought out the director privately and advised him to tell the actor that he should consider himself fortunate that he was “allowed” to live freely in India. Politics is of course a changeable profession and the sight of Bal Thackeray’s offspring paying tribute to him would perhaps amuse the actor—their party, Shiv Sena, had been at the forefront of those hounding him when he was awarded Pakistan’s highest civilian honour, Nishan-e-Imtiaz, in 1998.

But Dilip Kumar’s greatest contribution is to the art of acting, nowhere better expressed than by Javed Akhtar who credits him with the invention of method acting in 1944, much before Hollywood ascribed it to Marlon Brando. As the poet-lyricist said in a speech in 2011: “He crafted a new syntax, a new grammar, and a new language of acting. He codified Indian cinema’s acting for generations.” So much so, he added, that young actors now don’t even know when they imitate him. You only have to listen to him uttering the immortal lines “Kaun kambakht bardaasht karne ko peeta hai…hum toh peete hai ki yaha par baith sake,” from Devdas (1955) and compare it to how Shah Rukh Khan articulated it in Sanjay Leela Bhansali’s high-decibel version to understand the differ­ence between a whisper and a megaphone.

Those who have seen him primarily as an older man, either shooting down his beloved son played by Bachchan with tears in his eyes in Shakti (1982) or aiming his rifle at Raaj Kumar in Saudagar (1991) may wonder at the fuss around this perfectly courtly patriarch. To them I would recommend a thorough watching of any of his romances, perhaps beginning with Mehboob Khan’s Aan where his silken sallies drive Nadira almost to the brink of madness. She, clad in riding breeches and smart white shirt, and he in an angrakhi and churidar, seem to have swapped gender roles in dress but in emotion and sensuality, he is very much the man who will tame her and she is very much the woman who will submit. In film after film of that time, he is the brooding romantic and the women are drawn irresistibly to him and his un­ruly lock of hair, from Daag (1952), where he plays the alcoholic toymaker to Amar (1954), where he is the conflicted lawyer.

Certainly, the man known as the “Love Legend”, had more than one attachment in his life. And what women they were. The talented and gorgeous Uma Sood aka Kamini Kaushal, his co-star of many films, but unfortunately, already married to her sister’s husband so she could look after their children. There was Madhu­bala, whom he declared he would love “till the day she dies”, but also opposed her in court when his Naya Daur (1957) direc­tor BR Chopra accused her of reneging on her contract because of her all-controlling father Ataullah Khan. Then there was Vyjayanthimala, his able co-star in many movies, most memorably Madhumati (1958) and Ganga Jumna (1961).

In the age of the internet, an interna­tional outlook is easy but think of Dilip Kumar in the 1940s looking for a way to express himself, searching for it in the work of Hollywood actors Paul Muni and Spencer Tracy, finding it in an amalgam of his own study and professional consultations. This incipient globalism was not unique to him, Raj Kapoor was a big star in Soviet Russia and Dev Anand’s attempts to make English language movies are well documented. But it symbolised a new kind of manhood for the post-Indepen­dence men, a certain self-taught cosmopolitan ease which made them comfortable reciting Urdu couplets as well as Shakespeare’s lines; at once tentative and passionate in wooing women; and as confused about their duties in the family as they were confident about their roles in an emerging nation. They will all be missed. But they will all be loved forever .