A reunification of the corporations 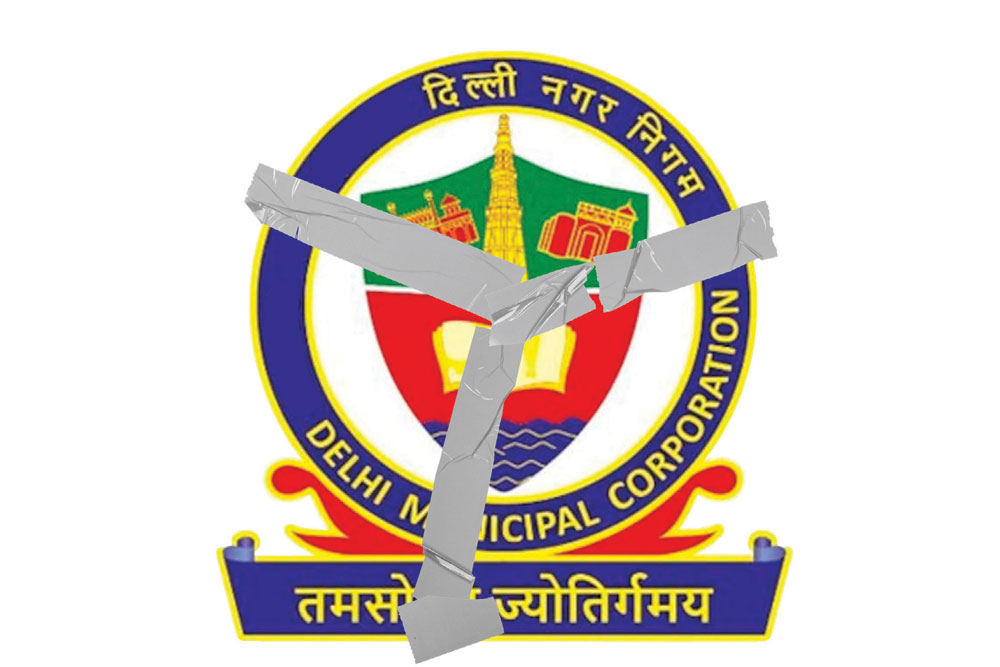 
IN 2011, THE NEXT election to the Delhi Assembly was still some way off, and storm clouds over the United Progressive Alliance (UPA) in the form of Anna Hazare’s India Against Corruption movement were not even wisps in the political firmament. The late Sheila Dikshit was at the height of her powers then, commanding the ear of Congress chief Sonia Gandhi. Her concerns at the time though were pretty much local and mostly in-house, largely centred on old-time corporation bosses who remained stubbornly unreconciled to Dikshit’s prominence and used their clout to snipe at her authority.

The Municipal Corporation of Delhi (MCD) stood almost like a rival to the Delhi government, which in any case was a quasi-state with the Centre controlling key functions like policing and most decisions requiring the lieutenant governor’s nod. Political rival Bharatiya Janata Party (BJP) had a traditional hold in the corporation, but Congress bosses were a bigger irritant. Cutting MCD to size seemed a good idea. Then Home Minister P Chidambaram had his reservations but bowed to Diskhit’s sway. BJP was a lesser problem, its old guard in the city smitten by concepts like London’s borough system (despite obvious dissimilarities) and the party failed to offer any resistance to the trifurcation move.

Riding on a political imperative, rather than sound administrative and fiscal maths, the trifurcation of the MCD was bound to fail. It set off a chain of events that were to have profoundly negative implications for the quality of life in the capital. In less than two years after MCD was split, Congress lost the Assembly election, with a newborn Aam Aadmi Party (AAP) ensuring a hung House. After a long spell of Central rule, AAP won a mammoth majority of 67 in a House of 70. But rather than heralding empowerment for local bodies in keeping with AAP’s professed claims to being a grassroots party, the new government refused to implement fiscal awards due to the corporations under the fourth Delhi Finance Commission. The idea was, again, purely political: starve the corporations so that they underperform, and discredit BJP which had won the local body polls in 2012. Not unlike Dikshit, Chief Minister Arvind Kejriwal recognised the influence even a trifurcated MCD wielded and sought to establish AAP’s dominance in two of the three tiers of governance (BJP having swept the seven Lok Sabha seats).

The Modi government’s decision to undo the trifurcation comes on the heels of AAP’s success in Punjab where it decimated the traditional powers of Congress and the Akalis. The immediate effect of the Delhi Municipal Corporation (Amendment) Act, 2022, once it receives the assent of the president, will be to extinguish the three separate corporations. The formation of a new corporation with a senior IAS official as commissioner will follow. But the election of 250 new corporators (down from earlier 272) will take a while. Herein lies the rub. The fresh de-limitation of 250 wards will be on the basis of the 2021 Census, stalled due to Covid. There is no indication when it will be taken up, and this effectively puts off elections for possibly as much as a year. AAP has cried foul, demanding MCD elections be concluded by May 18 when terms of the current corporations run out. Senior BJP leader and Rohini MLA Vijender Gupta questions Delhi government’s concerns in the light of its refusal to devolve funds to the corporations. “How come AAP is so bothered about corporations when it has done all it can to weaken them?” he asks.


A reunification of the corporations, some former officials have suggested, will not solve the problem of funds not being devolved. They have a point. But the amended act restores the Centre’s role and brings back a uniform approach to planning and decisions, like parking rates and property tax

No doubt an election at the current juncture can put BJP at a disadvantage. Home Minister Amit Shah addressed the issue in Parliament, stressing the Centre’s competence to frame laws for Delhi and saying it was AAP that treated the corporations unfairly. The new law will help ensure synergy in planning and optimal utilisation of resources, he said. It is indeed hard to detect clear shades of black and white in this political battle. Since AAP assumed office, most of the funds the corporations received have been through court directions. They have struggled to pay salaries and safai karamcharis, medical staff, healthcare workers and engineers have struck work more than 50 times since 2015. The calculation that agitated employees will target corporation officials and mayors backfired when workers began to pile garbage in front of the residences of AAP leaders. Some funds were released but in January 2021 the Delhi High Court wondered how the state government had the money for advertisements in newspapers but none to give to the corporations to pay salaries.

The recommendations of state finance commissions are the basis on which states devolve funds to local corporations. The awards are not mandatory, but the norm has been respected even though often enough, the parties in control of local bodies are in opposition to the ruling dispensation in a state. In any case, it is rare for a state government to reject the state finance commission’s recommendations in toto or to keep introducing conditions that interrupt the transfer of money. The matter is between the state and the corporations, with the Central government having no role to play. In Delhi’s overheated politics, AAP has demanded the Centre make good the funds but there is no provision by which the money can be directly transferred to corporations for functional needs. The cruellest cut has been the stoppage of funds to the corporations under the plan head, effectively bringing to a halt any development work. Indeed, gasping as they are to pay employees, the corporations can barely maintain a minimum of citizen-related services.

A reunification of the corporations, some former officials have suggested, will not solve the problem of funds not being devolved. They have a point. But the amended act restores the Centre’s role and brings back a uniform approach to planning and decisions, like parking rates and property tax. Trifurcation had led to three bloated corporations as one commissioner and 22 key heads of departments (HoDs) were replaced by three commissioners and 66 HoDs! Not just that, the commissioners were junior officers who would have little choice but to defer to the Delhi government and its chief secretary who outranks them several times over. Oddly enough, the reunification act drew flack for being “anti-federal”. But by what count was reducing the power of a corporation and wrecking its finances an act of empowerment? It went against the grain of arguments favouring devolution of powers to local bodies, forcefully articulated by Congress leaders like the late Rajiv Gandhi and several activists. The erstwhile MCD’s loan liability of ₹ 1,800 crore and payments of ₹ 650 crore due to contractors were passed on to the three corporations. The amounts are being deducted at an interest of 13.5 per cent from grants and revenue sharing. The share of corporations from the state government’s income stands reduced to 4 per cent from 5.5 per cent. Registered contractors have not been paid for work since 2015.

The new MCD will have recent history and the capital’s contentious politics stacked against it. Keeping in mind the state of the capital, one can only wish it well.