Did AAP’s government in Delhi provide inordinate benefits to liquor licensees at the expense of the public exchequer? 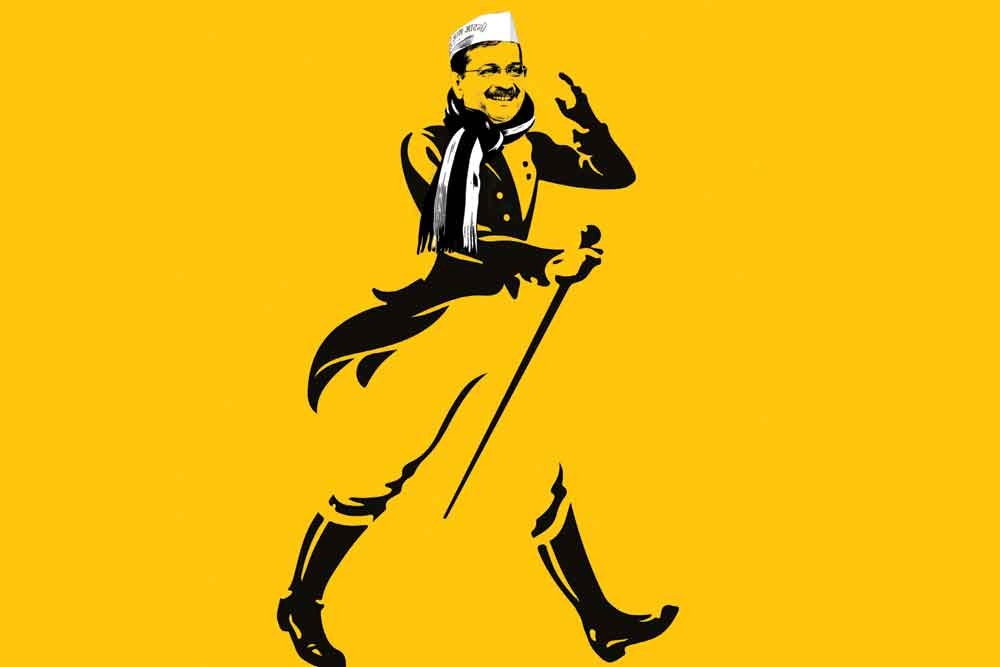 
Delhi’s thirsty tipplers were pleasantly surprised some months ago when display boards started appearing throughout the national capital screaming “Beer Hi Beer!” and “Wine Hi Wine!’ Many believed this was a welcome change from the Gandhi-spouting, Tricolour-wielding, mocktail-flourishing, teetotaler terrorism, and the two-faced pretensions of the ‘culturally rooted’. “Madirapan” would no longer be damned as an absolute vice, an act of the morally bitter. The good times of blamelessly guzzling liquor would return.

That the ads and hoardings were in direct violation of the existing national code—on not promoting alcohol consumption, an act punishable under law—seemed to be of little or no concern to the government in Delhi which chose to take no action against the advertisers. Under Section 41 of the Delhi Excise Act of 2009, promotion of liquor consumption through social media, banners, hoardings, pullouts, leaflets, videos, etcetera is liable to be penalised. Yet, the Department of Excise of the Delhi government preferred to turn a blind eye. It also thumbed its nose at Rules 26 and 27 of the Delhi Excise Rules, 2010.

This was just the beginning of a bizarre sequence of events. No sooner had the bubbly been uncorked that liquor vends began to shut down. Parched and irate travellers at the Indira Gandhi International (IGI) Airport began to find vends downing shutters. Those that were open began to see premium brands of liquor suddenly fly off the shelves. Customers found it hard to lay their hands on cherished brands of brandy, beer, Scotch, wine and vodka for love or money, or both.

Then, as suddenly as they had vanished for weeks, the bottles reappeared. There were discounts, extra gifts on purchases, even one-plus-one free on foreign liquor. The bizarre and the unreal were whipping up cocktails on Delhi’s liquor sales scene. It was beginning to smell fishy. When a scam amounting to several hundred crores of rupees behind all this was finally revealed, it wasn’t through a whistleblower. It was the Delhi chief secretary’s report on the issue that detected the malodorous state of affairs. On July 8, the state’s chief secretary submitted his report on what is proving to be one of Delhi’s biggest scams to the lieutenant governor and to the chief minister, outlining violation and manipulation of the excise policy and liquor licence rules of Delhi since 2021. This, shockingly enough, in the darkest of times in recent years when the Covid-19 pandemic killed many and Chief Minister Arvind Kejriwal devoted much time to grabbing political credit by blaming the Narendra Modi government at the Centre for the crippling shortage in oxygen and medicines to battle Covid.

The report pointed beyond any doubt to a well-planned and thoughtfully executed strategy to benefit top leaders of the Aam Aadmi Party (AAP) and crony liquor barons by tweaking existing rules. In particular, there are serious allegations against the minister in charge of the excise and revenue department, Manish Sisodia, deputy chief minister and close confidant of Arvind Kejriwal. This is a sea change for a party that rode to power with the blessings of Anna Hazare on an agenda of ending corruption on the India Against Corruption (IAC) platform.

The dubious Excise Policy was introduced by the Arvind Kejriwal government in the thick of the pandemic through a cabinet decision (No 2,994) on April 15, 2021. The probe report from the chief secretary now shows that this decision was most likely taken with the sole aim of benefitting private liquor barons in return for financial gains to select individuals on the topmost rungs of the ruling AAP in Delhi. The trail has led right up to the minister in charge of excise. The controversial decisions, in fact, were rammed through despite opposition from civil society, religious groups, and educational institutions and parents’ organisations.


On July 8, Delhi’s chief secretary submitted his report on what looks like one of the state’s biggest scams, involving violation of the excise policy and liquor licence rules. The report points to a strategy to benefit AAP leaders and crony liquor barons

Rule 57 of the Transaction of Business Rules, 1993 mandates that the chief secretary red flag any suspicious deviation, dilution or violation of rules and laid-down procedures to the lieutenant governor and the chief minister. On the basis of the chief secretary’s report, Lt Governor VK Saxena has recommended a Central Bureau of Investigation (CBI) probe into the Delhi Excise Policy 2021-22 of the Kejriwal government. The report was sent on July 8 this year and, according to those in the know, establishes “prima facie violations of the GNCTD [Government of National Capital Territory of Delhi] Act of 1991, Transaction of Business Rules (ToBR) 1993, Delhi Excise Act 2009 and Delhi Excise Rules 2010, in addition to deliberate and gross procedural lapses to provide post tender undue benefit to liquor licensees for the year 2021-22.” Most damningly, the report has “substantively indicated financial quid pro quo” at the top echelons of the political leadership.

The Kejriwal government’s move came when it was busy playing the victim card aggressively by blaming anyone but itself during the peak of the pandemic in 2021. The probe report has clearly pointed to an “enabling nexus” of private individuals, civil servants and the deputy chief minister who, it maintains, rode roughshod over decisions by disregarding due process, tweaking the existing policy, and giving the short shrift to rules and regulations so that liquor licensees could benefit from windfall gains.

Pointing fingers directly at the minister in charge of the Department of Excise, the probe report has said that he took and executed major decisions and actions, violating statutory provisions and the notified Excise Policy, thus resulting in “huge financial implications”. A report to the lieutenant governor claimed that Sisodia also extended “undue financial favours” to the liquor licensees long after the tenders had been awarded, translating into huge losses to the exchequer and of taxpayers’ money.

For instance, without due diligence, the Kejriwal government floated a tender by including a condition that a minimum of just two liquor vends could be set up in each ward. Subsequently, with the intention of according windfall post-tender gains to existing licensees, the Excise Department allowed them to open additional vends in conforming areas without needing approval from the competent authorities. Rules were tweaked without batting an eyelid. No licence fee was levied for the additional awards after the Delhi cabinet first met to endorse the powers of the minister in charge to dilute the licensing policy. That meeting approved “minor changes within the overall framework of the policy in the interest of its implementation.” However, this cabinet decision was red-flagged by the then lieutenant governor of Delhi. A later cabinet meeting on April 21, 2021 then withdrew its approval.

But the controversial decisions continued to be implemented by the Excise Department allegedly solely on Sisodia’s nod. Far from strictly adhering to rules and imposing penalties for their violation, the Delhi government actually refunded a whopping ₹ 30 crore to the L1 bidder of licence of the Airport Zone who had failed to obtain a no-objection certificate from the airport authorities. This was in gross violation of Rule 48(11)(b) of the Delhi Excise Rules, 2010. That rule stipulates that the successful bidder must complete all formalities for grant of licence, failing which all deposits would be appropriated by the government. This was clearly done in collusion with the liquor mafia, apparently for a kickback.

In November 2021, the Excise Department revised the formula for calculating the rates of foreign liquor and removed the import pass fee of
₹ 50 per case of beer. This made foreign liquor and beer cheaper for retail licensees at a loss of revenue to the state exchequer. This undue favour to licensees was extended after tenders were awarded. Undue financial favours were granted to the L7Z licensees by the Excise Department, instead of penalising them for defaulting on licence fee payment and interest.

Crony liquor licensees reaped other benefits, too. Without any increase in the tendered licence fee, the operational period for L7Z licensees and L1 licensees was extended twice, by one month, first from April 1, 2022 to May 31, 2022 and then from June 1, 2022 to July 31, 2022. No approval was taken from the cabinet or the lieutenant governor for this, despite rules requiring it.

Once Sisodia and Kejriwal caught a whiff of trouble brewing for them on the liquor licensing front, an emergency cabinet meeting was urgently called on July 14. This was apparently so that all the rule violations could be urgently endorsed in a blanket manner. In itself, even this cabinet meeting was a violation of rules. It was called at 2PM but a notice reached the chief secretary, who is also the ex officio secretary to the cabinet, only on the morning of the same day, without any cabinet note or agenda being circulated. The rules also state clearly that the cabinet note and agenda have to reach the lieutenant governor 48 hours before the meeting. This provision can be relaxed only in extraordinary and clearly justifiable circumstances. On that day, though, this reached the lieutenant governor only after 5PM—after the meeting was over. Decisions regarding policy matters have to be vetted by the lieutenant governor and require his approval first in order to be executed. The immediate trigger for the ‘urgent’ cabinet meeting, evidently, was to paint over the alleged transgressions of the Kejriwal government on the liquor licence front, so that no inquiry could hold it guilty of the steps it took.

There are serious allegations against the minister in charge of the excise and revenue department, Manish Sisodia, close confidant of Kejriwal. This is a sea change for a party that rode to power on an agenda of ending corruption

There is ample evidence, prima facie, that the Kejriwal government gave inordinate benefits to crony liquor licensees at a big cost to the public exchequer, in violation of all established statutes, rules and procedures. It is now left to the CBI probe to ascertain just how big the losses actually were.

Kejriwal’s immediate and expected reaction to the developments has been to play the victim card and to assert that Sisodia is a very trusted and long-time friend and ally who is being framed unjustly. But the Delhi chief minister has long stopped crying in public for another trusted ally now behind bars for money laundering, Satyendra Jain, whom he threw under the bus. It is perhaps worth asking how long before that happens with Sisodia too and the house of AAP is gutted by the raging fire of corruption.