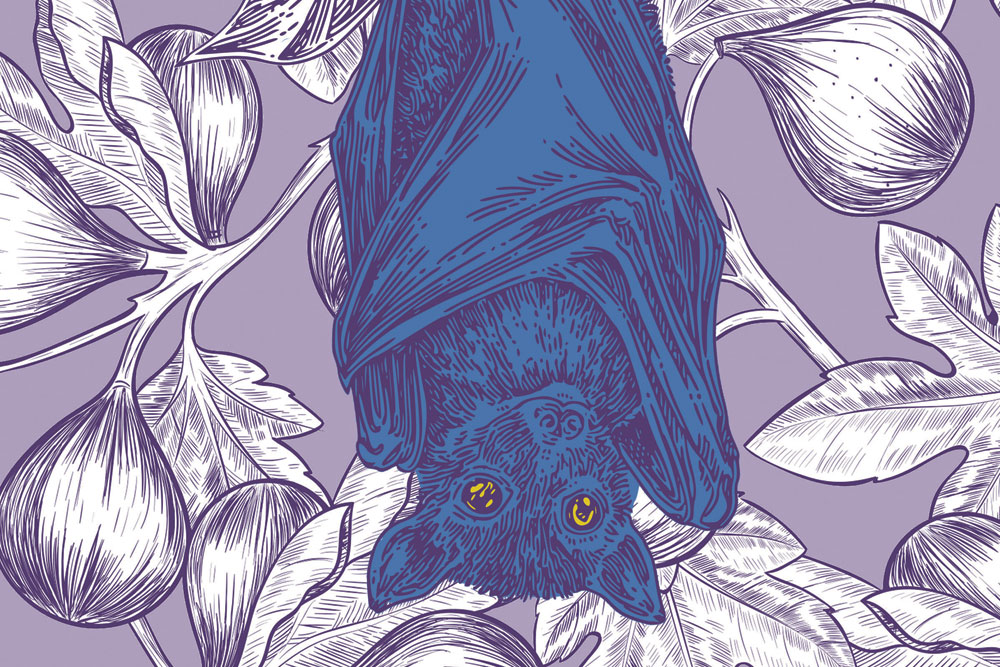 
Once a year, on a certain new moon night, a hill village in Tamil Nadu’s Tirunelveli district bears witness to a bizarre ritual. The members of a tribe, nude except for an imaginative confection of black cloth tied to each shoulder and flowing down the arm like a bat wing, gather to drink, dance, make squealing sounds and climb trees. Outsiders are forbidden to behold the ceremony and warned of a curse, adding an air of dark menace to the vivid atmospherics of the scene—a classic balance of wonder and dread that even features the bat, a keystone species in the protean universe of horror cinema and lore. Before you imagine it unfold in lurid technicolour, the bat that is invoked in this ceremony is not the nosferatu whose appearance onscreen promises a satisfying splatter spectacle, or handsome supernatural shapeshifters from teen romances or the pretend-predators of Halloween, but the real-world humble creature of the night that belongs to the order Chiroptera, meaning ‘hand-wing’. “It is a rare celebration of the vavval, a creature that receives scant positive attention for roaming the night skies pollinating flowers and dispersing seeds far and wide,” says Tamil writer and Sahitya Akademi Award winner Cho Dharman who has visited the site of the festival. The novel that took root in his mind is nearly ready for publication now. Using the bat as a metaphor for Dravidian politicians who lead double lives—one of them on an inverted plane and operating in darkness, and another who is in a position to shape the world by planting powerful ideas in the minds of people—Dharman, who lives a stone’s throw away from a large bat colony in Kovilpatti in Thoothukudi district, does not treat the bat as a symbol of human absence and ruin. There is nothing foundationally dark about bats, he says. “They remain mysterious because we don’t understand their biology. Why don’t they perch like birds or walk like animals? How do they rear their young and for how long? Why are the males and the females nearly indistinguishable? Do they really eat and excrete via their mouths? [They don’t.]” While bats have lived amidst humans for thousands of years, we have treated them as mammalian marginalia, shunning, exoticising and vilifying them.


By preying on agricultural pests, insectivorous bats are estimated to render a service worth over $1 billion globally. In India, where farm wisdom discounts their role in pest management, bats could use a smart marketing makeover

Much before bats came to be reservoirs for the SARS-CoV-2 virus, they were natural reservoirs for superstitions. A puerile fear, ancient and misplaced, continues to inform our relationship with bats. As Dharman puts it, “We are not afraid that bats would attack us; we are afraid of the things they symbolise.” In parts of India, they are harbingers of doom and apparitions awaiting salvation; in others, a source of meat and fertiliser for crops. In cities, they are mere shadows darting across the twilight sky. In the Wildlife Protection Act, 1972, most bats are classified as ‘vermin’ under Schedule V, making them susceptible to hunting and mass killing. In fact, flying foxes, the most common of fruit bats in India, are consumed—and not just by Nagas—in the belief that the meat can cure asthma and tuberculosis. After Nipah and Covid-19, despairing naturalists, fearing another setback to the status of bats in India, swung into action to dispel myths about bats: they wrote about how bats can actually see with their eyes—quite well; that they are not unclean, as they spend much of their resting time cleaning themselves; and that vampire bats are tiny creatures found in Central and South America, including Mexico, where they prey on livestock, but are incapable of draining enough blood to cause any harm. It has also been shown that bats do not harbour any more or fewer zoonotic viruses than other mammals and birds. But there are facts and there is myth. And beliefs about nocturnal beings are hard to repudiate.

Allusions to bats, especially to the arboreal species, in literature reveal how people shared the landscape with them. In Natrinai, the first of the eight anthologies of Sangam Tamil literature authored between the 1st and the 3rd centuries CE, the poetess Nakkannaiyar likens the heroine’s longing for the Chola king she loves to a sharp-toothed bat’s daydream, as it hangs from a mango tree, to taste the bittersweet gooseberry. Set in the coastal landscape, the poem’s sensibilities perhaps reflect the ecological importance of bats in mangroves, with trees like the Sonneratia alba extensively pollinated by them. Elsewhere in Natrinai, the grief-stricken mother of a girl who has eloped with her lover draws parallels with a bat that tires of the fruit of the veppa maram (neem tree) and goes in search of the honey-like sweetness of the iluppai (Madhuca longifolia). Today, amidst widespread habitat destruction, some of the symbiotic spirit of another era survives only in sacred groves, reserved forests and communities that revere the natural world.

Of the 120-plus bat species found in India, 23 are endemic to the country. Four are endangered according to the International Union for Conservation of Nature: the Nicobar flying fox (Pteropus faunulus), the Andaman horseshoe bat (Rhinolophus cognatus), the Kolar leaf-nosed bat (Hipposideros hypophyllus) and Salim Ali’s fruit bat (Latidens salimalii). The Wroughton’s free-tailed bat (Otomops wroughtonii), classified as ‘data-deficient’ but likely vulnerable or endangered, holds the rare distinction of being a flagship species at a wildlife sanctuary. “Bhimgad was declared a sanctuary in 2011 mainly because of this bat, which back then was known to exist only in two other caves in Belgaum and Meghalaya,” says Rohit Chakravarty, a PhD student at the Leibniz Institute for Zoo and Wildlife Research in Berlin, who studies the bats of Uttarakhand. The signboard at the sanctuary gate sports a likeness of the (unfortunately wrong species of) bat. “We don’t know a lot about Indian bats. Much remains to be studied about their ecological role. For instance, the Andamans, where I have worked, are home to three species of flying foxes. There are no large birds on the islands that can cover such distances as these bats can, travelling up to 100-200km a night to forage for food and possibly dispersing seeds from one island to another,” he says. Across the country, attitudes towards bats, however, remain more or less hostile.

Conservationists joke that had there been a bat god, bats, like snakes, would not be reviled and hunted. Faith does offer refuge to bats. The temples of south India, many of them over 1,000 years old, are the preferred roosting sites for several species of insectivorous bats that originally thrived mainly in rock caves. “In Murappanadu, Thoothukudi district, where there is an important Saivite temple, locals protect bats and don’t allow even researchers to get close to them,” says Juliet Vanitharani, a senior bat scientist who is credited with spotting Salim Ali’s fruit bat outside the Meghamalai hills where it was originally seen. While the reclusive bat is safe in its habitats in the Kalakkad-Mundanthurai Tiger Reserve (KMTR) where she worked for most of her career, temple bat populations have been on the decline. In Cheranmahadevi, a town by the Thamirabarani in Tirunelveli district, ancient temples had harboured tens of thousands of bats for centuries, until they were driven away in the name of renovation work—which inevitably means plastering rock surfaces and making them inhospitable for bats, fitting modern lights and actively chasing away or burning bat colonies. “Eighty per cent of the 300-plus temples in the southern Tamil Nadu districts of Tirunelveli, Tenkasi and Thoothukudi harbour sizeable bat populations,” says M Mathivanan, a field researcher with the Ashoka Trust for Research in Ecology and the Environment (ATREE), Bengaluru. An ATREE team has been studying bats in the region for several years now, and the data doesn’t bode well. “In the three districts, we saw populations of the fulvous rousette fruit bat, which prefers old buildings, decline from 3,000 five-six years ago to 100 two years ago. As humans begin to view bats as unsanitary creatures and actively chase them away, species that are noisy, or easily spotted, will be the first to be affected.” Other bats, including some leaf-nosed species, have adapted to human interference in their habitats, Mathivanan says.

Conservationists joke that had there been a bat god, bats, like snakes, would not be reviled and hunted. Faith does offer refuge to bats. The temples of south India are the preferred roosting sites for insectivorous bats that originally thrived mainly in rock caves

Perhaps the most studied forested bat corridor in India, the KMTR-Agasthyamalai region in Tamil Nadu has added immensely to our understanding of the ecological role of bats, says KS Seshadri, an ecologist and a postdoctoral fellow at the Indian Institute of Science, Bengaluru. “For instance, researchers were able to link abnormally high flower production in Cullenia exarillata trees native to the southern Western Ghats to a spike in the bat population in the forest in a certain year. We must look at bats the way we look at birds and bees—Paul Ehrlich’s hypothesis that every species is a rivet in the ecosystem applies to all of them.” Mango, cashew and wild banana aside, the red silk-cotton tree, which blooms as the sun sets, is a favourite of bats.

The world over, insectivorous bats have been found to prey on agricultural pests, with the service they render estimated to be worth over $1 billion. In India, where traditional farm wisdom seems to discount the role of bats in pest management, bats could use a smart marketing makeover. Viewing them as an ominous presence darkening the skies of a post-Covid world is akin to believing that millions of petrels shield Bouvet Island—a small, uninhabited, volcanic patch in the South Atlantic Sea—from view every time a ship passes by. Unaware of their approaching deaths, and swinging from a branch in the wind, bats are as much victims of circumstances as humans.

If Telugu poet Gurram Jashuva (1895-1971) elevated the status of the bat to that of a messenger conveying the wishes of an untouchable to Lord Siva in Kashi in Gabbilam (Bat), a stirring work that parodies Kalidasa’s Meghaduta, Dharman, who won the Sahitya Akademi Award for Koogai (Owl), his 2005 novel where the bird becomes a symbol of Dalit existence, is all set to give wings to another nocturnal creature.