Back to Manicured Pleasures

All the flowers and creepers between history and memory 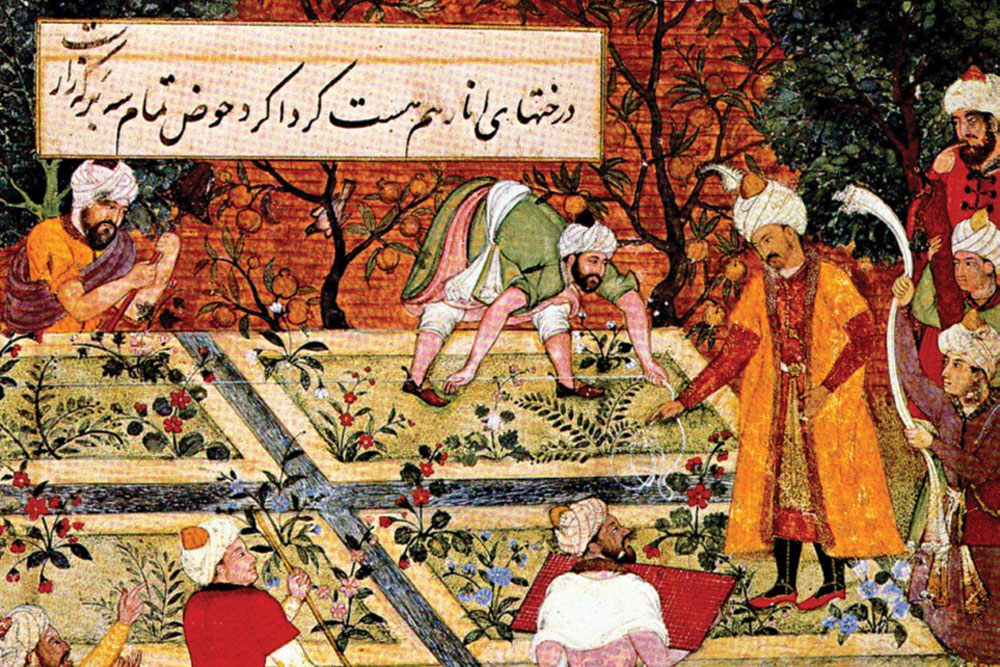 Babur supervising work in a garden, from the Baburnama (Photo: Alamy)


LAST MARCH, India began a lockdown. Traffic stopped. No vendors shouting their wares, no loud chatter on the street, no people on foot, cars, bicycles and carts. A switch had been turned off for man-made noises. This silence allowed us to hear other sounds that we usually never register. It was like listening to nature’s symphony. The day would begin with the chirrup of a sparrow and the caws of crows, followed by the tuneful whistle of songbirds and the mournful call of the kestrel, and then the rest of the bird calls would chime in. The rustle of the wind through tall fountain grass into the boughs of the roadside laburnum and gulmohar trees would deepen the melody. The lockdown created for us new ways of seeing and hearing nature. How has that impacted on how we imagine our gardens?

While some of us may only now be aware of the natural world around us, how we think about and imagine gardens today is, in fact, influenced by our past. Our conception of how to deal with nature (whether to tame it or celebrate it or corral it), what to plant, and how to design our gardens, big and small, is a mix of several influences—pleasure gardens of ancient India, the semi-other worldliness of Buddhist gardens, the orderliness of temple and Mughal gardens, and the flowers of British gardens.

While Vedic literature has scant mention of gardens, we know a little about ancient gardens in India from the inscriptions and textual sources associated with early historic India in the first centuries of the Common Era, says Daud Ali in Gardens in Early Indian Court Life. Vanam and other words for garden, park and grove often had prefixes with words for pleasure and enjoyment. There was a shift from the earlier emphasis on sacrifice and feeding off the social order to one where the king enjoyed his realm, argues Ali. Now properly lived worldly life was pervaded by felicity (sukha) and proper enjoyment (bhoga) of the world. Plants had a value in themselves, for their beauty, and not just for their herbal and medicinal attributes. The growth of a sophisticated courtly culture gave prominence to pleasure gardens where kings and queens, princes and the princesses could play.

By the Gupta period, he says, the palaces and mansions of courtiers, courtesans and wealthy merchants had flower gardens and fruit orchards. They were no longer the prerogative of royal blood. The Kamasutra talks of the garden in the house of the nagaraka, while the Arthashastra mentions making groves as part of the king’s task. From then on stories and poems mention different types of gardens—public gardens, those attached to dwellings, and temple gardens with their sacred groves and ponds. In Buddhism and Islam, there is the celestial and imaginary garden as well. By the 12th century, enjoyment of gardens came to occupy a key place in the practical and mental lives of the elite, says Ali. The 12th century text Manasollasa, composed by King Somesvara III at the court of the Western Chalukyas in the Deccan, covers many aspects of gardening such as soil, planting, how to make flowers bloom etcetera.

Whether these early imaginings saw gardens as a form of nature or not is more difficult to answer. Daud Ali argues that these descriptions suggest that gardens were not seen as wild or untamed or pristine nature but instead they were considered carefully designed and constructed places. A handbook for poets from the Gupta period, the Amarakosha refers to the garden as a constructed or artificial place. The natural world was not seen as being in opposition to human manipulation and artifice. He points out that there was no Romantic concept of gardens as a respite from city and society. Nor was the garden a holistic union of man and nature. Instead, the garden and its aesthetics were considered to be a material and moral prerogative of the elite, extensions of their palaces, outside rooms. Their layout resembled the palace with courtyards, enclosures and groves where the elite could relax, delight in playing games, have trysts in the moonlight. Ali may be right because it was this elite—royals, aristocrats and wealthy merchants—who were the audience of the literary texts and poetry and songs. Not the masses who couldn’t read and write.

Stories from that period have princes scaling walls and falling in love with princesses and queens glimpsed in the bower. In a story from Dandin’s Dashakumaracharita, which narrates the adventures of ten princes, a prince meets the queen in a tryst in a bower. ‘Entering from one part of it I went into the inner bower surrounded on all sides with thick walls of yellow Amaranth with full blown flowers. By opening a door formed of the branches of red Asoka plants that touched the earth with bristling hair in the form of fresh buds and looking red with a mass of tender foliage. In it there was a well spread couch of flowers, caskets of lotus leaves filled with materials for amorous enjoyment, an ivory fan and a vase filled with fragrant water.’


For the Mughals, Charbagh became the governing principle of their gardens—composed of two intersecting lines, dividing the garden into four quadrants with a platform in the centre

Scholars point out that the three main landscape features of ancient gardens were water (either a pond or artificial lake or pools for bathing), bowers (either a clump of trees to form an enclosure or creepers arranged on a roofed pavilion to provide shelter from sunlight) with swings, seats and inlaid floors, and artificially raised mounds or hills, pleasure hills, covered with flowering trees, and hosting peacocks (which kept the snakes away). While most of us cannot afford such luxuries in our terraces and balconies, many gardens in India whether in small spaces or in large ones contain elements of these pleasure gardens of ancient India.

Flowers and creepers appear in Buddhist imaginaries seen in the reliefs at Sanchi. But here, the garden was de-eroticised. Buddha and his monks often stayed in the gardens of wealthy devotees. Buddhists, says historian Akira Shimada, see the garden as a bridge between the material and the spiritual worlds. A similar move is found in the emergence of Brahminical temples enclosed by boundary walls within which were ornamental shrubs and water tanks and paths with sculptures of demigods. Gardening enthusiast Nupur Dasgupta argues that this ordering of nature occurs simultaneously with the institutionalisation of religion. In today’s private gardens, one finds sculptures of a Ganesha or a Buddha on a pedestal surrounded by pots of flowers or creepers. From the Mughals, present-day gardens have taken the principle of order. For the Mughals, nature is related to rule and dynastic self-representation, says historian Ebba Koch. Charbagh became the governing principle of Mughal gardens—composed of two intersecting lines, dividing the garden into four quadrants with a platform in the centre. Each quarter is further divided into four sections. These linear representations are evident in how pots and planters are arranged in contemporary Indian homes.

Colonial Britain’s attempt to recreate English gardens in India has left behind a legacy, particularly in north India of British flowers. Come winter, Delhi blooms with larkspur, Sweet William, hollyhock, dahlias, among others. These were brought by homesick Englishmen and their wives to conjure
up home in a foreign land. As author Judith Roberts points out, for the British in India, the garden had to balance three things:

protection from the fierce sun, access to breeze and good ventilation. Despite the plantings, it achieved only superficial Englishness because all the familiar seasonal English flowers bloomed together at the same time!

Roberts tells us that it was in the villas and bungalow gardens that one sees British imaginaries being transposed in the verandas and courtyards of homes in Bombay, Calcutta and Madras. The garden was seen as a continuation of the house with rooms and plantings to create different effects. A nook, a rose garden, a lawn. Except for the lawn, it wasn’t so different from the ancient Indian garden layouts. However, the difference was in the plants used and also in the direction in which the mansion looked. In the ancient gardens, the gaze was inward but in British homes in India, the house looked outward towards this vista.

As for the plants, traditional Indian gardens relied on deep-rooted blossoming trees and creepers and flowering shrubs. Mango, Asoka, Champaka, Nag-Champa, Sal, Palmyra, Screw Pine, Coral Tree and jasmine. Not wildflowers. The author Eugenia Herbert points out that lilies, roses, bougainvillea came to India with the Mughals. Even marigold (which is considered so auspicious) was known in Europe and associated with marriage long before it appeared in India.

English plants wilted in India’s heat leading gardening enthusiasts like Beatrix Stanley to advise all those who try gardening in India to grow as many of the native plants, shrubs and creepers as possible. But many Englishwomen continued to persevere. They focused on creating the lawn, an expanse of green that would give a sense of coolness and evoke memories of England.

Our image of a garden thus continues to mingle and converse with our history. We use creepers and flowers associated with pleasure gardens, grow British wildflowers in winter, display sacred sculptures in naturalistic settings, and use Mughal charbagh principles in public parks and terrace gardens.