The forced migration of Kashmiri Pandits, for long kept out of the national narrative, is finally becoming visible and gaining the attention of the rest of India 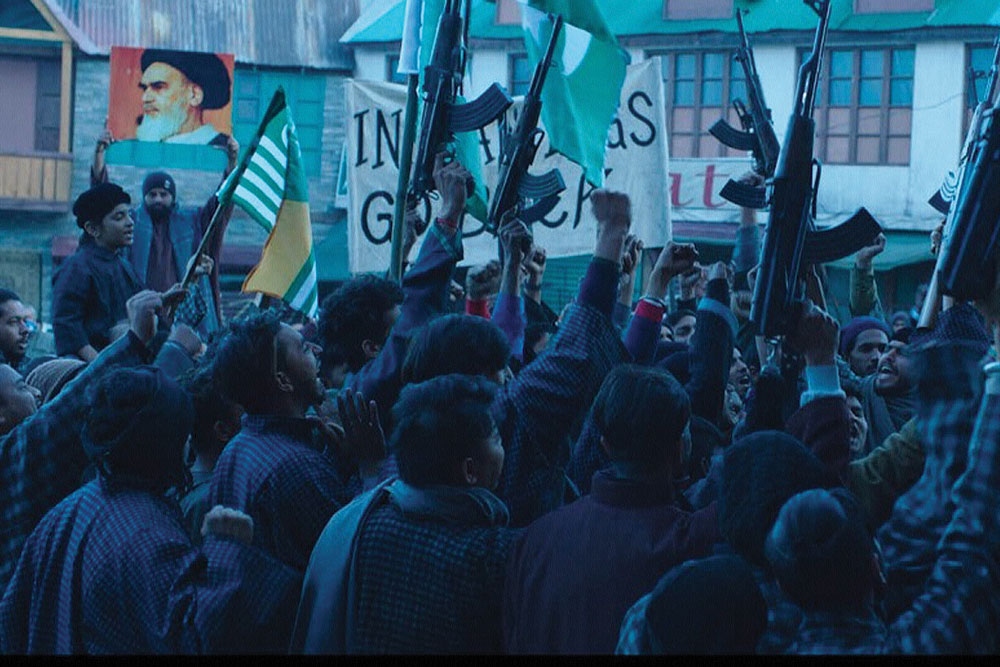 A scene from The Kashmir Files


THERE ARE 24 of them, men, women, and even a child, arrayed against a wall that says “Musalman Jago.” One by one, Farooq Malik Bitta (based on Bitta Karate) shoots them at point-blank range with a pistol. They fall, almost weightlessly, into a mass grave. It is a recreation of the Nadi­marg massacre of 2003 and it comes at the end of Vivek Ranjan Agnihotri’s new movie, The Kashmir Files, by which time several such atrocities on Kashmiri Pandits are laid bare. The pace is re­lentless, almost mirroring the events leading up to the great exo­dus of January 19, 1990. The assassinations of prominent Kash­miri Pandits, the threats of “reliev, geliev, seliev” (convert, die or flee), the calls for the men to leave and keep their women behind, and the speeches calling for Nizam-e-Mustafa are all shown with the force of a sledgehammer.

The effect—the result of over 700 testimonies by families in In­dia and abroad collected by Agnihotri—is brutal. It is something Rohini Vaishnavi, management consultant and granddaughter of Kashmiri Pandit leader Amarnath Vaishnavi, does not want to watch. As an 18-year-old who had to depart one night for Jammu on January 20, 1990, never to return, she has lived this trauma. “Now, it is for the world to see it and acknowledge it,”’ she says, even as she rattles off stories of a cousin seeing his father, a police officer, getting shot in the chest; an uncle and aunt who had to deal with terrorists—slipping them chits under the door, telling them terror was waiting for them on the other side, with guns; and of families forever divided, living in different cities.

She is not alone. For the proud community, the almost perma­nent exile from their homeland is a bitter fact of life. Even worse is that their almost silent cleansing has never been part of the national narrative. A Hindu minority in a Muslim majority state, their forced migration is almost invisible in popular culture. Until now. What began as a tiny baby step in Onir’s I Am (2010), as a segment on the exile of Kashmiri Pandits in a four-part movie on people who live on the margins of society, has become increas­ingly visible and audible.

With memoirs such as Siddharth Gigoo’s The Garden of Soli­tude (2010) and Rahul Pandita’s Our Moon Has Blood Clots (2013), scholarly work by Neerja Mattoo and Shonaleela Kaul, and movies such as Vidhu Vinod Chopra’s Shikara (2020), and now Agnihotri’s The Kashmir Files, the drops have become a trickle. Rashneek Kher, of human rights group Roots In Kashmir, whose family had to leave the Valley in 1990, says the silence has bro­ken. “Even in the media now, there is a recognition of what transpired, except for some known culprits who still do not acknowledge it. But that’s all right. Memoirs like the one written by Rahul Pandita have helped immensely. The work we did either by going to university campuses or challenging separatists on news shows and by use of social media did help too.”

About time. The Bollywood-isation of Kashmir has had its day. Kashmir has been the backdrop of the young man from the city finding himself a fair-skinned beauty, the ultimate fantasy of plain men from the plains throughout the 1960s and 1970s, in movies such as Kashmir Ki Kali (1964). Terrorism brought the Army and the police in conflict with the local population, spawning ultra-nation­alist movies such as Mani Ratnam’s Roja (1992) and the terrorist-as-rebel movies, such as Vidhu Vinod Chopra’s Mission Kashmir (2000) and Kunal Kohli’s Fanaa (2006). The Kashmiri Pandit was missing, even in light romances such as Jab Jab Phool Khile (1965), when a slinky Rita (Nanda) falls in love with a houseboat owner named Raja. No religion is specified and needed in what becomes a class rather than religious divide before happily ever after.


It is only now that the Hindus are telling their own stories. By 1990, Kashmiri pandits had no choice. The Kashmir Files shows the build-up: ration being denied to pandit women, Pakistani currency being used in bazaars, and the Pakistan flag replacing the Tricolour

It is only now that the Hindus, for so long seen as the collateral damage in a war of an unjust state against innocent people, are tell­ing their own stories. It is an inconvenient truth, but also seemingly a convenient one with the blame for misinformation falling on the current government’s three biggest bugbears—left-liberal academ­ics, independent media, and Muslims of any ethnicity. It all depends on which political ideology one adheres to. But that the exodus hap­pened is undeniable. Trusted neighbours turned informers, houses were often ransacked, stripped even of samovars and spittoons, or sometimes just taken over by the security forces, with beautifully carved traditional doors and windows burnt for warmth during winters, and friendships broken forever.

The number of Kashmiri Pandits who had to flee ranges from two lakh to five lakh, just as the number assassinated varies from 290 to 5,000. Historian and professor at JNU, Shonaleeka Kaul, says, “Public acknowledgment of the Kashmiri Pandit exile has only just started in earnest. There remains resistance to it in cer­tain quarters. But it is this relatively increased popular interest, especially after the negation of Article 370, that has perhaps given rise to the recent movies on the theme, rather than the other way round. As for academics, Kashmir as a whole has always been woefully under-represented in course curricula, but a trickle of research work on the displacement and human rights of the KP community can now be seen in disciplines such as sociology.”

Little work has been done on the history of Kashmiri Pandit resistance over the years, with the focus being on the oppression of Muslims by the security forces, most effectively in Vishal Bhard­waj’s critically acclaimed Haider (2014). But as The Chronicles of Kash­mir, a self-published book edited by Vaishnavi shows, the Pandits have also had cause to agitate—for instance, the Praja Parishad protests of 1952-53 for “Ek Vidhan, Ek Pradhan, Ek Nishan/One Con­stitution, one prime minister, one flag”. The systematic marginalisa­tion of the community became an accepted fact of life says, Aparna Challu, whose Respect Origins promotes direct sourcing and fair trade. Admissions to courses in medicine and engineering were de­nied, despite adequate marks, on one ground or another, while jobs were given to Muslim candidates often with poorer qualifications.

The Parmeshwari Agitation in 1967, which few recall, was when things came to a head. Parmeshwari Handoo, a 17-year-old girl, eloped with a Muslim man, Ghulam Rasool Kanth, or was abducted by him, depending on which version one believed. Both worked in the government grocery store at the Lalla Rukh Hotel on Lal Chowk in Srinagar. Using this event as an opportunity, Kash­miri Pandits expressed their pent-up demands for equal rights and oppor­tunities in jobs and admissions. They presented a memorandum to the governments at the state and Centre. They promised to fulfil all their de­mands, provided they withdrew the agitation, which had almost reached its peak. YB Chavan flew to Srinagar and called all Kashmiri Pandit leaders for a meeting at DP Dhar’s house. He begged them to call off the agitation with the words “Nahin to saara Hindu­stan jal jayega/the whole of India will burn.” That was the end. The Kash­miri Pandit leaders trusted the politi­cians and withdrew the agitation.

Not for the first time, they were let down.

That was when many Kashmiri Pandits realised that Kashmir had no future for them. By 1990, they had no choice. The Kashmir Files shows the build-up—ration being denied to Pan­dit women, Pakistani currency being used in bazaars, and the Pakistan flag replacing the Tricolour. What was seen by the whole world as an abnormality in1983, when specta­tors came waving Pakistani flags as India played Australia at the Sher-e-Kashmir stadium in Srinagar, became commonplace.

In the Kashmir Files, the assassinations of prominent Kashmiri pandits, the threats of ‘reliev, geliev, seliev’ (convert, die or flee), the calls for the men to leave and keep their women behind, and the speeches calling for nizam-e-mustafa are all shown with the force of a sledgehammer

Challu makes the point that the Pandits were systematically stripped of their identity, with the state weeding them out of jobs and academic institutions. “The history of the Pandits has been subsumed under the narrative of political conflict, with no explanation for why an entire community had to jump on to trucks, their homes occupied, their legacies wiped out.” What was meant to be a few weeks of absence, turned into years and decades, which Anupam Kher’s character in The Kashmir Files captures so well, the increasingly demented Pushkar Nath Pan­dit, who writes 6,000 letters to the prime minister hoping he will respond to their plight. He doesn’t. It is like the lead character of Shikara, like many men who lost their identity as intellectuals, professionals, and persons of worth.

The tragedy is that the collective memory of both communi­ties is happening at the expense of the other. Even in Rumours of Spring: A Girlhood in Kashmir, Farah Bashir’s sensitive account of growing up during the militancy, Kashmiri Pandits appear only as ghosts, as sometime neighbours, class teachers, and classmates. And then, poof, one day they are gone, and there is no attempt to consider why they never returned.

Challu says once the words come, the acknowledgement will follow, and they will be able to cry. A million pieces of glass their hearts shattered into, and which are still embedded in their souls, will heal. Finally. For isn’t that the purpose of creating art?